CONWAY — Marqelle Barnes didn’t hit all of his free throws but he hit just enough.

With :07.2 left in overtime and the Bryant Hornets freshman team locked in a 54-54 tie with the Conway Blue Wampus Cats, Barnes stepped to the line and converted two free throws to give his team a lead.

Conway Blue got a shot to tie it but Trey Tull, who had scored 25 points in the game, had to force it over Bryant defenders and missed as the Hornets held on, celebrating a 56-54 victory in a Central Arkansas Junior High Conference war at Buzz Bolding Arena Monday night.

Barnes’ game-winning throws came after Conway Blue’s Chase Boyd missed a 3-point try with the game tied. Bryant’s Catrell Wallace yanked down the carom for his 16th rebound of the game. Head coach Tyler Posey called a timeout as the Cats descended on Wallace, to make sure the Hornets retained possession and to set up the strategy and the press offense.

The game was tied 52-52 when Barnes was sent to the line at the 1:35 mark of the extra period. He converted once to snap the deadlock but, at the other end, Tull converted the first of a one-and-one to tie it again.

After a Bryant miss, a free throw from Boyd put Conway Blue ahead by a point. But, on the inbounds play, Barnes worked up the floor against the press and was fouled with :38.4 to play. He got the second shot to go, tying it at 54, setting the stage for the dramatic finish.

The victory was a welcome bounce-back after the Hornets suffered a disappointing 51-34 loss to North Little Rock at home last Thursday.

“I challenged my guys,” Posey said. “They weren’t playing with the right mindset. I don’t think they were coming out believing they could beat everybody. I really challenged them and they very much responded tonight.

“It was a rollercoaster night but, for us, it was just about resilience,” the coach asserted. “I told them, no matter what happens, let’s do the next best thing. And every time we got hit, we responded. I talked about that all week after that (North Little Rock) game. We’ve just got to respond. I really felt like we made it a priority in this one.”

The Hornets’ scoring was balanced. Ethan Hilkert came off the bench to lead the way with 12 points. Keith Merriweather Jr., O.J. Newburn and Barnes each had 9. Wallace finished with 8 and Colby Washington 5. Arlon Jenkins and Darrick Rose added 2 each while sparking the Bryant defense.

Conway appeared to have all the momentum as the third quarter ended and the fourth quarter unfolded. The Cats’ 10-0 run erased a 36-31 deficit and turned it into a 41-36 lead, forcing a Bryant timeout with 4:54 left in the game.

But, as Posey noted, the Hornets responded. Wallace hit a free throw after getting a nice feed inside from Barnes. Merriweather followed with a steal and, though he missed, Hilkert was there for a stickback. Another theft by Merriweather led to a layup for Hilkert as the blitz brought the Hornets even at 41 at the 3:26 mark.

Newburn blocked a 3-point try by Conway Blue’s Donavan Nooner and, at the other end, drove for a layup to put the Hornets ahead.

Conway got three chances to answer but came up empty. Newburn drove to the hoop, drew the defense and dished to Wallace for a basket that made it 45-41 with 2:26 left.

Tull, who had an uncanny knack to get into the lane and hit unbalanced shots, did just that with 2:05 left and the Cats had two chances to tie or take the lead. When Tull missed from 3, Wallace rebounded and Posey got a timeout.

When play resumed, Merriweather knocked down a clutch jumper from 12 feet to make it 47-43 with 1:02 left in regulation. But Tull threw in a deep 3 and Conway got a timeout with :45 left, trailing by a point.

The Cats had to use two fouls to get the Hornets into the bonus and they did so quickly. With :30.3 on the clock, Hilkert was sent to the line with a one-and-one. Though his first shot refused to fall, Wallace kept the rebound alive as he battled Conway Blue’s big Jayden Williams. The ball came out to Merriweather who was fouled with :29.3 to go. He knocked down both shots to make it a 3-point game.

With the Hornets guarding against the 3, Tull drove into the lane and popped a jumper and Conway got a timeout with :17.4 left.

When play resumed, Rose was fouled as he worked the ball up the court. He couldn’t get his first shot to go but Barnes snuck in to claim the rebound and was fouled with :11.9 left.

In the double bonus, Barnes converted the second of two shots to give his team a 50-48 lead. In turn, Conway Blue worked it to midcourt against the Bryant press — both teams pressed nearly the entire game, making for a furious pace.

On the subsequent play, the Hornets did a good job defending Boyd who threw up a miss only to have Williams grab the rebound and beat the buzzer to tie the game.

The overtime scoring began with a free throw by Williams to break the tie after Boyd had made a steal. In response, Hilkert drained a clutch jumper for 14 feet. Tull tied it at 52 then made a steal but an illegal screen cost the Cats leading to the first overtime trip to the line for Barnes.

The game began, fittingly enough, with an offensive-rebound bucket by Wallace. Merriweather scored 5 points, all from the line in the opening period, which went back and forth, ending with a Wallace free throw that made it 12-11 going into the second stanza.

Boyd drove for a basket and Newburn tied it with a free throw. Tull canned a running jumper but Newburn nailed a 3 to even it at 18. Williams scored inside but Colby Washington was fouled and tied it at the line.

The Hornets gained the upper hand when they got out on a break off a turnover. With Williams back on defense, Newburn attacked, scored over him and was fouled. The three-point play sparked the Hornets to a 27-23 halftime lead as Jenkins and Rose scored — the latter off a steal — over the final 1:40 of the half.

Washington’s layup off a feed from Merriweather extended the margin to 6 at the start of the third quarter but Conway crept back in, taking a 31-30 lead. It went back and forth from there.

The Hornets surged after a timeout. Barnes nailed a pull-up jumper. After a flurry of misses, Hilkert scored as he was fouled. Though his free throw rimmed out, the Hornets kept the ball alive until Hilkert controlled it and scored to make it 36-31.

But Conway’s Robert Scott got free inside for a bucket and Tull nailed a 3 and it was tied going into the fourth quarter.

The Cats extended that run to 10-0 with a basket by Tull and a 3 from Nooner to start the fourth.

Now 4-4 overall and 3-1 in the Central Arkansas Junior High Conference, the Hornets will play at Little Rock Catholic this Thursday. 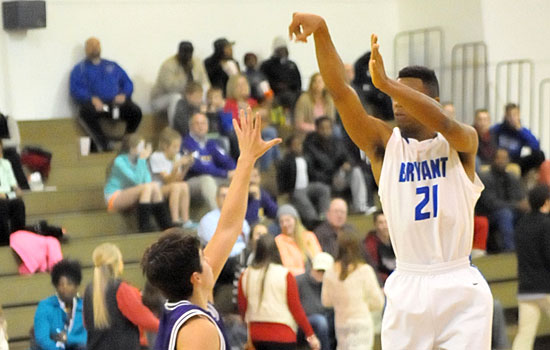