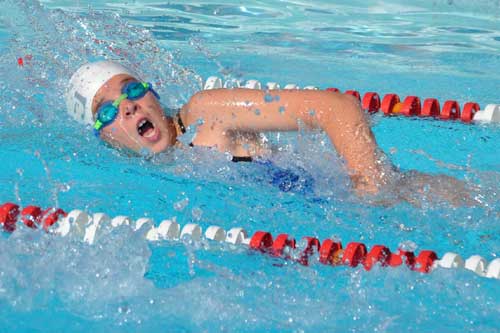 Saturday started with a little rain that threatened the Bryant Barracudas’ week two showdown with the Maumelle Marlins but ended in a great day for breaking records at the pool at Longhills Golf Club.

Coaches Onat Tungach and David Degues are leading their swimmers even this early in the season to push themselves to new personal bests as well as new team records. As individual swimmers’ posted new times, the entire Barracuda team benefited beating the Marlins 638 to 526. This is the first time in several years that the Barracudas topped the Marlins.[more] 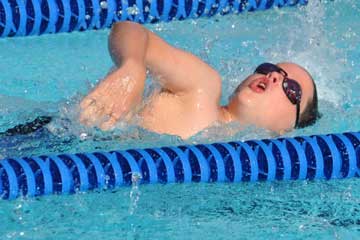 Jesse Wolf and Dylan Machycek are both good contenders for breaking the team record in the 15/16 50 free style this year.

Justine Tazelaar and Erin Moser both broke Katie Matthew’s record of 28.99 held since 2005. But Justine holds the team record now by 0.6 of a second.

Mason Nelson is very close to breaking Josh Terrel's record of 37.22 in the 50 meter back stroke 9-10 age group.

David Flora and Garrett Sullivan will be challenging the team record in the 50 meter back stroke now held by Caleb Thomas with a time of 37.40 in the 11-12 age group.

Monica Guyett beat the oldest Guyett swimmer Nicole's record in the 50 meter back stroke 11-12 age group with a time of 35.56.

Lindsey Butler also beat the previous year’s record holder with a time of 35.83. It’ll be a season-long battle between Lindsey and Monica to see who will hold the team record at the end of the season.

Nicole Guyett, Dabbs and Kelsey Vaughn all broke the 50 meter breast stroke team record held by Erin Moser. Nicole is in front with a time of 39.19, but the race among the three ladies will be exciting to watch all season.

John Dellorto is challenging the 7-8 yr old 25 meter Butterfly record currently held by Joshua Terrell with a time of 19.51.

Six-year-old Olivia Chambers broke Audrey Guyett's record in the 25 meter butterfly with a time of 26.78.

Moser's record in the 13-14 age group 50 fly is being challenged by Dabbs and Nicole Guyett.

First-ever recorded in the 7-8 age group, an Individual medley record of 1:52.38 was set by Dellorto. There is no record of another 7-8 year old ever swimming the race. This year, the Barracudas have several kids in this age group — girls and boys — who will successfully compete in the event. There are also have a couple of 6 and under swimmers that will compete in the event.

The Otter Creek Otters will play host to the Barracudas next Saturday morning.

For more detailed information from this event, visit www.salinecountyswimteam.com.