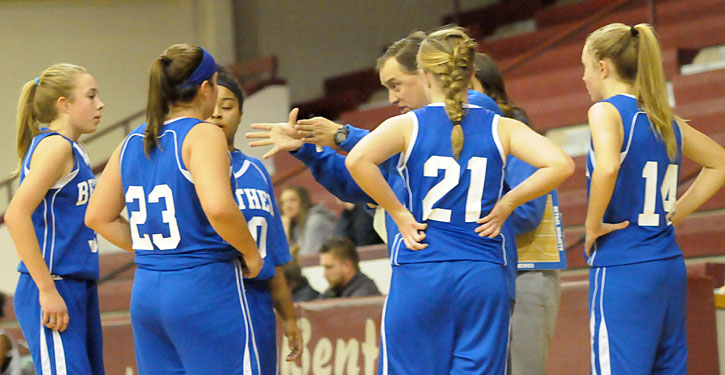 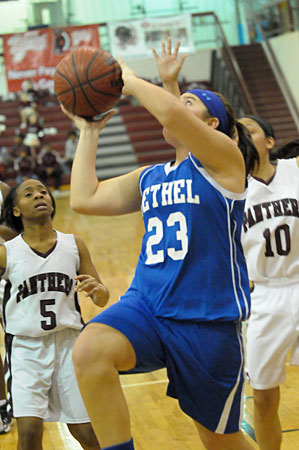 Addison Funk eyes the basket off a drive around a Benton defender. (Photo by Kevin Nagle)

BENTON — In a game in which neither team could manage much of a lead, the Benton Lady Panthers eighth grade team scored the last 5 points in the final 1:50 to escape with a 34-26 win over the Bryant Blue Lady Hornets of Bethel Middle School Monday night at Panther Arena.

The largest lead for either team before the fourth quarter had been 4 points. Bethel’s Addison Funk hit a 3 to open that final period and the Lady Hornets trailed just 23-22. In response, Benton connected on a pair of free throws on two trips to the line then scored off a turnover to make it a 5-point game.

After a scramble in which both teams struggled to capitalize, another couple of trips to the line increased the margin to 29-22 with 3:20 left to play.

The Lady Hornets snapped a 2:30 cold spell when Meagan Brown converted a free throw and Funk followed up with a steal that led to Kattrina Johnson’s basket off an offensive rebound.

Bethel coach Derek McGrew took a quick timeout with 2:57 left and, when play resumed, the Lady Hornets nearly forced a five-second call as Benton struggled to get the ball inbounded. The Lady Panthers got a timeout at the last moment to avoid the turnover. 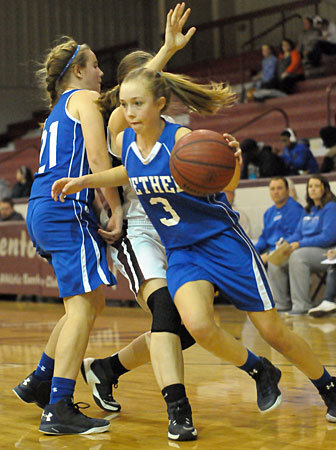 Benton missed twice at the other end of the floor but the Lady Hornets weren’t able to take advantage initially, missing a jumper. But their defense gave them another chance as, this time, the Lady Panthers couldn’t get the ball in and couldn’t save the situation with a timeout. The Lady Hornets were awarded the ball but an illegal screen cost them.

With 2:33 left, Benton got to the line for a one-and-one but came up empty. Ashton Inman controlled the rebound and, with 2:17 to go, Funk was fouled going to the basket. She converted once to trim the margin to 29-26 but that turned out to be the last of the Lady Hornets’ scoring despite the fact that they forced a couple of quick turnovers.

The Lady Hornets were 6 of 13 from the free-throw line in the game while the Lady Panthers went 14 of 27.

To start the game, Benton grabbed a 4-0 lead. But Ashton Inman hit a 3. A pair of free throws for Benton were countered by the first of Funk’s three triples in the game, tying the game 6-6. 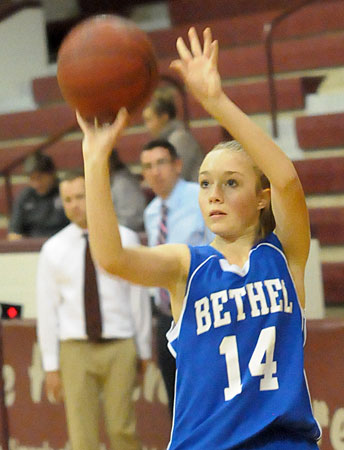 Abbey Inman launches a jumper from the left wing. (Photo by Kevin Nagle)

Benton managed an 8-7 edge going into the second quarter. But Brown scored inside to give the Lady Hornets their first lead.

Hutchison was fouled after grabbing the carom off a miss by Funk early in the second half. Her free throws extended the Bethel lead to 17-14.

Benton, however, scored the next 7 points to push out to a 21-17 advantage. With :24 left in the third quarter, Funk hit a running jumper to trim the lead to 2. She and Abbey Inman combined on a steal but a turnover foiled their hopes of tying it back up.

Benton scored with :04 showing on the clock to make it 23-19 going into the final period.

The Lady Hornets return to action on Thursday against Cabot North at the Bryant Middle School gym.