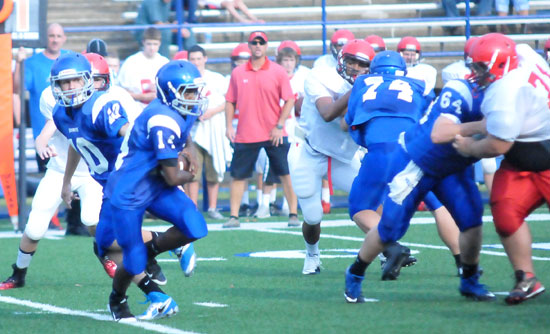 Bethel bounces back with 22-0 win 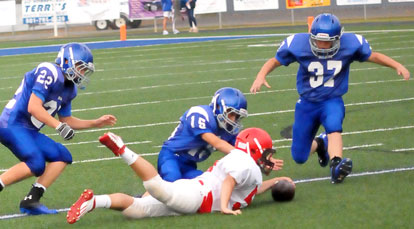 But he made the most of them.

Woodson rushed five times for 121 yards, scoring on runs of 50 and 54 yards. He also caught a pass from quarterback Mike Jones for another 13 yards and a touchdown as the Hornets pinned a 22-0 loss on the Junior Panthers at Bryant Stadium.

It was kind of that way for the whole Bethel team with 16 offensive snaps compared to the grind-it-out Cabot North’s 34. But the Hornets defense stymied the Junior Panthers’ power running game, limiting them to just 62 yards of offense, all on the ground.

And, though the Hornets ran fewer than half as many plays on offense, they more than doubled the output with 265 yards.

The players, coaches and fans of the Hornets were deeply disappointed with their 13-12 loss to a tough Pulaski Heights team in their opener on Tuesday, Sept. 3. Then they had to wait more than a week to get back out on the field and, when they did, it came against the always physical Cabot North Junior Panthers. 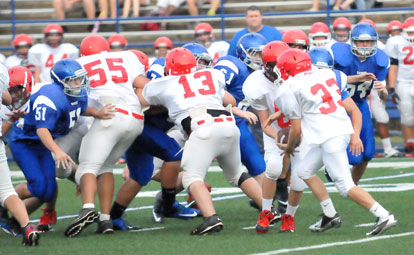 Bryant Blue defenders Logan Rich (51), Brandon Hoover (61) and Cole Campbell (54) and their teammates try to get some penetration against the Cabot North offensive line as quarterback Rail Gilliam hands to Noah Sorrell (33). (Photo by Kevin Nagle)

“The kids were heartbroken until Monday afternoon,” recalled Hornets head coach Dale Jones. “To bounce back like this and put that behind us was great. I was real pleased with the effort.

“We played another physical team but we were up to the task tonight, I think,” he said. “They’re so good at keeping the ball away from you but we made stops when we had to. To pitch a shutout against them is tough. Coach (Josh) Akers did a good job of getting us prepared. Logan Rich and Parker Littleton played really good defense tonight.

“I really thought that we could run the football on them and we did,” he added. “I was impressed. I thought we won the line of scrimmage on both sides of the ball. Not every play, of course, but, for the most part, I thought we did.”

Bethel appeared to be on its way to the end zone to start the game on the strength of big runs from Woodson and Jonathan Smith. A fumble ended the drive, however, but the defense stepped up led by lost-yardage tackles by Brandon Hoover and Rich. Ryan Harris and Cole Campbell combined on a third-down stop at midfield then a fourth-down play was undermined by a fumble that Hoover covered.

On the very next snap, Woodson set sail on his 50-yard scoring bolt. Luke Welch kicked the extra point to make it 7-0.

The extra point kick was significant because the Hornets had worked hard during the week to refine the play. Because they had struggled with it in practice the previous week, they tried two-point conversions after their touchdowns at Pulaski Heights. When they were unable to convert, it turned out to be a difference-maker.

Cabot covered an onside kick, picking up good field position with it. The Panthers drove to the Bryant 26 where big stops by Jonathan Santos on one play then Jones and Littleton on another set up a fourth-and-10 at the 26. Cabot tried to pass but Rail Gilliam’s throw was knocked down by Campbell and the Hornets took over on downs. 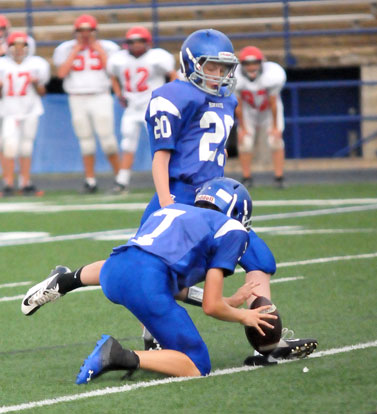 Luke Welch boots an extra point out of the hold of Cameron Vail. (Photo by Kevin Nagle)

The result was a 74-yard scoring drive that was highlighted by Mike Jones’ 32-yard keeper. He also completed an 8-yard pass to Cameron Vail to convert a third down. From the 14, the Hornets worked a screen pass to Woodson who sliced through the Cabot North defense and into the end zone. Welch kicked it to 14-0 with 1:20 left in the half.

The Hornets forced a punt on Cabot’s first possession of the second half. Smith, Littleton and Jace Houston combined on a second-down stop for no gain then Smith came up with a sack on third down.

Jones made a nice 10-yard return of the punt as the Bethel offense took the field at their own 47. On the first snap, Woodson broke his second scoring run, covering 53 yards.

And when Cabot North jumped offsides before the extra point attempt, the Hornets went for 2 and Woodson powered in behind the left side of the offensive line to make it 22-0 with 3:31 still to play in the third quarter.

As it turned out, Cabot North kept the ball for most of the rest of the game. The Panthers drove from their own 40 to the Bryant 21 but consecutive lost-yardage plays and a fourth-down stuff by Houston forced them to turn the ball over on downs with 1:37 left in the game.

Smith dashed 20 yards then Jacob Thomason broke a 28-yard run then the Hornets ran a pair of victory plays as back-up quarterback Myers Buck took a knee to run out the rest of the clock.

Bethel has little preparation time for its next outing against Little Rock Dunbar on Tuesday, Sept. 17. 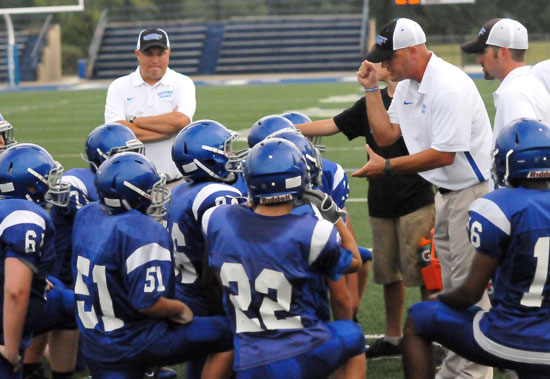