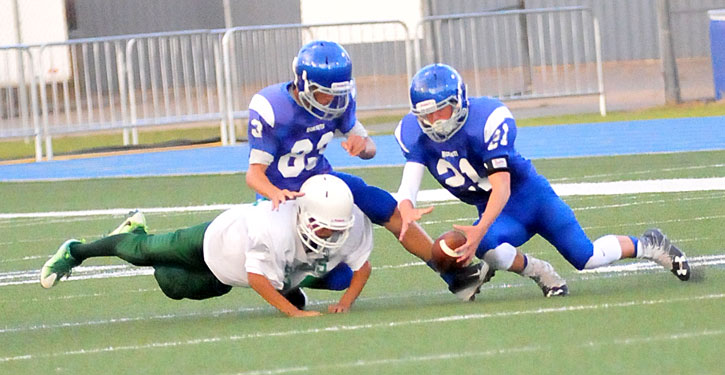 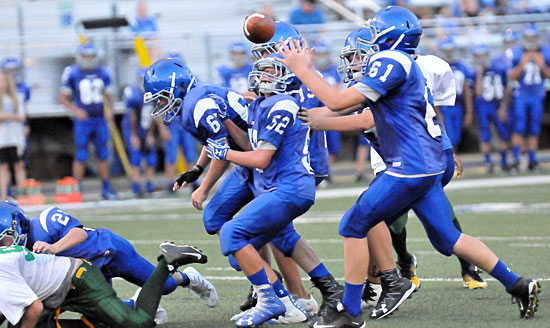 Will Heathcote (61), flanked by teammate Brayden Godwin, grabs an errant pass off a bad snap on his way into the end zone. (Photo by Kevin Nagle)

It was 12-0 before the Eagles had snapped the ball on offense. And by the time it was 18-0, the visitors to Bryant Stadium had run one play.

Before the first quarter was over, the Hornets led 25-0. The Bethel starters remained in the game for the first series of the second quarter then gave way to reserves as nearly everybody got in the game on the way to a 27-6 win. 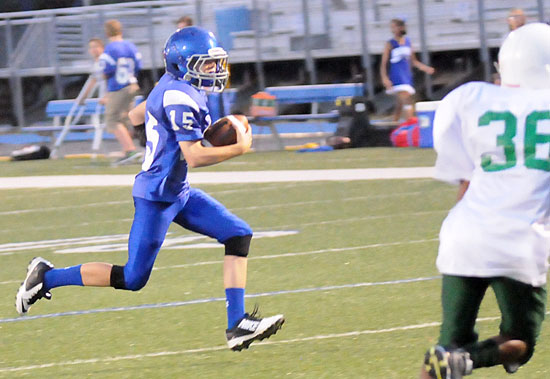 The win improved Bryant Blue to 2-1 on the season, going into next Tuesday’s home battle with Pulaski Heights.

The Hornets picked up yardage in chunks in the opening possession of the game. On the first play, quarterback Garrett Wilson connected with Hayden Schrader on a 12-yard pass. Running back River Gregory dashed 20 yards then 21 on the next two snaps. Austin Schroeder caught a 6-yard pass then ran the fly sweep for 12 more to the Eagles’ 3. Gregory scored from there to make it 6-0. 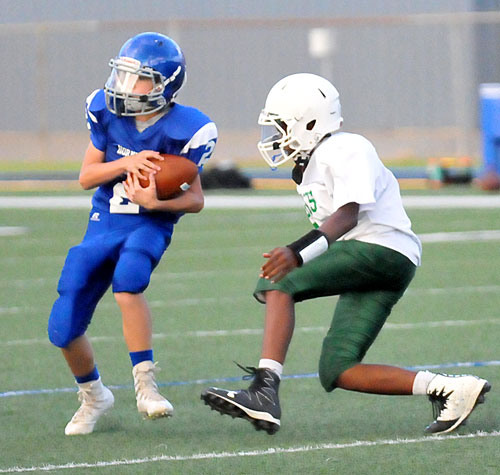 Austin Schroeder hauls in a pass in front of a Forest Heights defender. (Photo by Kevin Nagle)

The Hornets had the ball back in short order when Hart Penfield recovered an onside kick, 46 yards away from the end zone.

Xavier Foote ran three times in the four-play drive, picking up 13 and 25 stripes to set up his 8-yard touchdown run. It was 12-0.

Forest Heights covered a short kick and set up its offense at the 37. But with linebacker Brayden Godwin crashing in at the snap, the ball was fumbled and Penfield recovered again.

Wilson completed three passes in the ensuing drive. He found Schrader for 3 yards then his throw to Ty Bahnks broke for 29 yards only to have most of that negated by a holding penalty. Wilson kept for 11 yards to pick up a first down. After an incomplete pass, he and Schrader combined for a 23-yard touchdown toss that made it 18-0 with 3:44 still to play in the first period.

The Eagles got a chance to run some offense after the ensuing kickoff but all three plays lost yardage.

In the first half, Forest Heights finished with a net of minus-24 yards rushing, a figure that only improved to minus-10 by the end of the game.

On fourth down, the Eagles set up to punt but the snap came early and was finally picked up by upback Jarkell Lovelace who tried to get rid of it with a pass. The ball popped up and Bethel’s Will Hathcote snatched it out of the air inside the 5 and stepped into the end zone for a touchdown.

Brock Funk kicked the extra point and, with 1:27 still remaining in the opening stanza, it was 25-0.

A series that included two more lost-yardage plays followed for the Eagles. This time, they got the punt away but Bethel wound up just 38 yards from another score as the second quarter unfolded.

Gregory slashed for 16 yards on first down but the drive stalled at the 14 and Bethel coach Josh Akers decided to give Funk a chance to kick a field goal. The 30-yard boot had enough distance but it was just off to the right. 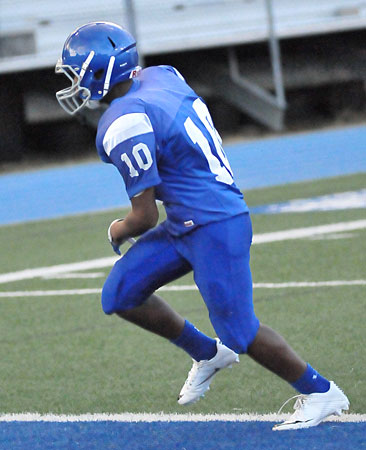 It looked like Funk would get another shot when, after another three-and-out for the Eagles, the Hornets got the ball at the Forest Heights 22. With the second team in, the running of Albert Reddick and Jackson Regan got the ball to the 5. But, on a second-and-4 there, Regan was dropped for a 10-yard loss on an Eagles blitz by Jakeylen Haney.

A play later, Funk came on to attempt a 33-yard field goal. But the snap was low and Penfield, the holder, grabbed the ball and took off. He reached the 10 before he was stopped as time ran out in the half.

Reddick had dashes of 17 and 11 yards in the Hornets’ first possession of the second half as they drove to the Eagles’ 4. But, behind Haney, Forest Heights pushed back. A third-down fumble at the 10 was recovered by the Eagles.

In turn, the Eagles had a bad snap covered by quarterback Roderick Gaines lost 10 yards to the 1. On the next snap, the ball evaded Gaines and rolled through the end zone for a safety, making it 27-0 with just over a minute left in the third quarter. 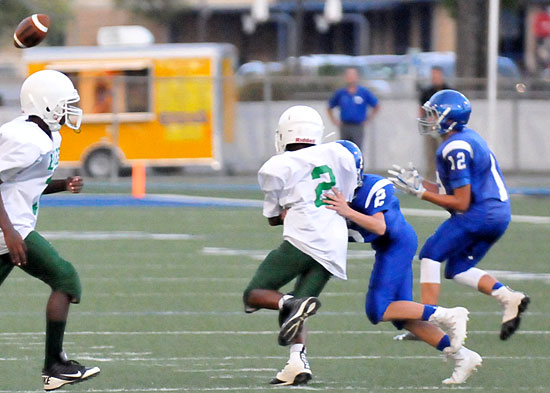 Hayden Schrader (12) prepares to catch a screen pass as Austin Schroeder clears the way with a block on Forest Heights’ James Jordan. (Photo by Kevin Nagle)

As a result of the safety, Forest Heights kicked off to Bethel from its own 20. The Hornets got the ball back at the 34 after a 28-yard return by Schroeder. A 10-yard burst by Nathan Macuil helped them drive to the 13 where another fumble cost them possession.

The Eagles, with Keylon Harris in at quarterback and Bethel subbing heavily, drove for their lone score. Harris completed a 21-yard pass to Lovelace and had runs of 10 and 15 yards along the way.

Still, they faced a third-and-2 at the Bethel 32 when Koby Melton crashed through and stopped Harris for no gain. Harris converted the fourth down with a 3-yard keeper but, on the next play, the Hornets, led by Melton and Jaden Newburn, dropped him for a 6-yard loss.

With a minute to play, the Eagles tried a long lateral to Gaines in hopes that he would be able to throw deep. But the throw hit the ground and was ruled an incomplete pass. On a similar play, Harris hit Gaines, who picked up 10 yards.

At that point, the Eagles were down to their last play, a fourth-and-6 at the Bethel 25 with time running low. This time the lateral worked and Gaines fired a deep pass to Lovelace who made the catch and scored to break up the shutout.

A try for two failed and when Foote ran back the ensuing kickoff to the 45 and Macuil dashed 13 yards on first down, time had run out. 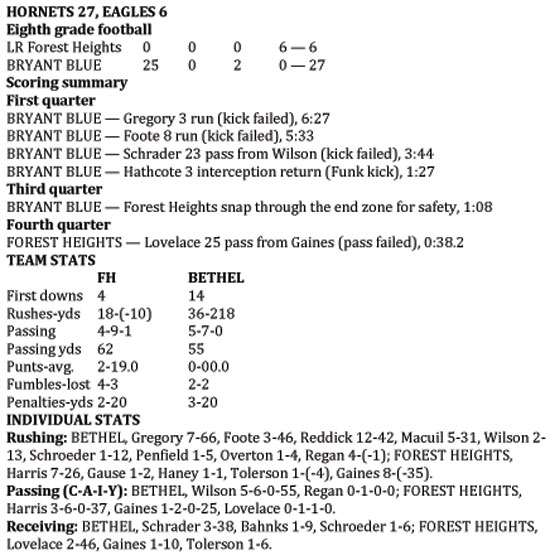