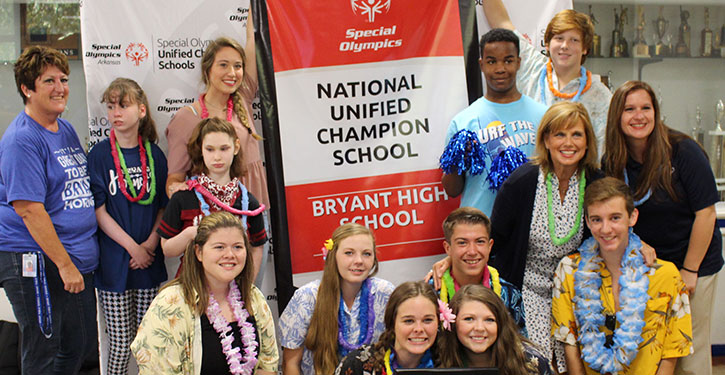 Special Olympics Arkansas honored Bryant High School with national banner recognition on Sept. 15 for its inclusive school climate in sports and activities for students with and without disabilities. BHS is the first and only school in the state to be named a Unified Champion School.

A Special Olympics Unified Champion School has an inclusive school climate and exudes a sense of collaboration, engagement and respect for all members of the student body and staff. A Unified Champion School receiving national banner recognition is one that has demonstrated commitment to inclusion by meeting 10 national standards of excellence. These standards were developed by a national panel of leaders from Special Olympics and the education community.

Bryant High School successfully met these standards with a focus on United Sports, Inclusive Youth Leadership and Whole-School Engagement. Through the efforts of the school Partner’s Club, BHS offers Special Olympics Unified Sports such as volleyball, basketball, golf, football and floor hockey. Club members host pep rallies and volunteer at Special Olympic events. The group focuses on inclusion and building relationships between those with and without disabilities.