BHS freshmen to be welcomed at Back To School Bash

For the fourth year in a row, Bryant High School will be ditching the traditional style of freshman orientation for a more upbeat atmosphere with its Back to School Bash. Ugly Ed Johnson of the radio station, Alice 107.7 will play live music, and Arvest Bank will serve hot dogs for the event. 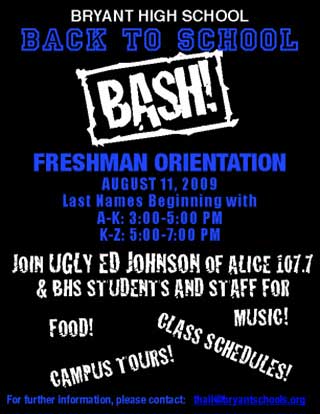 The Bash will be held on Tuesday, Aug. 11 from 3 to 5 p.m., for students with last names beginning with A-K and from 5 to 7 p.m., for last names beginning with L-Z. Students and their parents are invited to come to the cafeteria on the north campus to begin the orientation. This will be a come-and-go event. According to Tim Hall, a BHS teacher who organized the Bash, parents should expect the entire process to take, on average, less than 30 minutes.

First, students will receive their schedules, order their freshman t-shirts and get hot dogs.

After they have their schedules, freshmen can walk around and find out where their classes will be so they know where to go on the first day of school. Parents will have a chance to meet teachers, administrators and other parents during this time. Tours will begin from the cafeteria to show students key areas of the campus.[more]

Hall said seeing where the classes will be and going on the tour, “seems to take a little of the anxiety away on that first day.”

Throughout the evening, brief parent orientation sessions will be held in Love Auditorium by Andress Whaley, a BHS teacher. According to Hall, these sessions will inform parents about what they should expect from the school and their students after the semester starts.

BHS will be adding a feature for freshmen this year. Students will be divided into teams based on their Career Action Planning (CAPs) classes. The teams will have no real distinction other than the color t-shirt they will wear on designated days. According to Hall, there will be competitions among teams throughout the year in areas such as highest team grade point average, most community service work, and most color t-shirts worn on CAPs day.

“These teams are not like the pods in middle school,” said Hall. “They are set up for fun and for positive peer pressure.”

Hall said some of the goals for freshman are to keep them interested in school and to help them mature. He hopes the teams will promote attitudes which will help them accomplish these goals. At the Bash, students find out on which team they will be.

For further information about the Back to School Bash, contact Hall at thall@bryantschools.org.