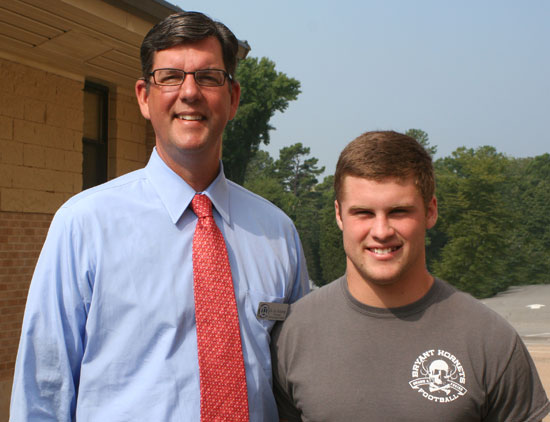 Davis Nossaman, a senior at Bryant High School, has been named a 2014 National Merit semifinalist.

Nossaman is one of only 150 Arkansas high school students named National Merit Semifinalist, representing less than one percent of high schol seniors in the United States.

A semifinalist must have an outstanding academic record throughout high school, be endorsed and recommend by a high school official, write an essay, and earn high scores on the PSAT.

“It is a honor to have Davis as a student at Bryant High School,” said Dr. Jay Pickering, BHS principal. “He is an outstanding leader in the classroom and on the playing field. Being selected to the National Merit Program is a testament to his dedication to academic success. We are all very proud of Davis.”

As a Bryant football player, Nossaman was named to the 501 Players to Watch football team, based on his leadership on and off the field. He is vice president of the student spirit group the Swarm and president of Youth Alive. Nossaman volunteered to coach a Bryant City League basketball team last summer and helped with an inner city soccer camp for the Knollwood Comunity.

He is the son of Rob and Sherry Nossaman.