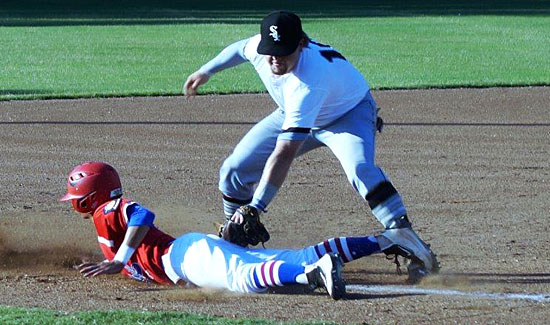 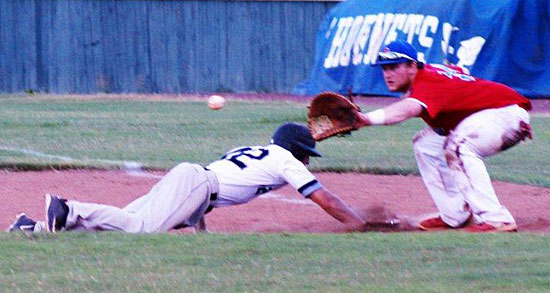 Garrett Misenheimer capped off a game-breaking eight-run fifth with a bases-loaded triple, one of his three hits on the night, as the Bryant Black Sox blew open a tie game with Russellville Post 20 in Senior American Legion baseball Thursday night at Bryant High School Field.

The Sox hammered 17 hits in the 14-4 victory to improve to 11-2-1 going into this weekend’s work at the annual Keith Hagan Memorial All-American Classic in Memphis. Bryant opens pool play on Friday at 4 p.m., at Gagliano Field. 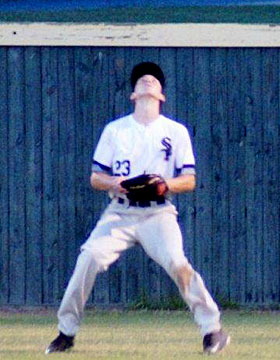 On Thursday, Logan Allen finished for the Sox in more ways that one. He pitched a scoreless top of the eighth and, in the home half, belted a two-out RBI single to end the game, making it a run-rule victory.

Allen had two hits as did Jordan Gentry, Seth Tucker, Matthew Sandidge and Hunter Oglesby. Gentry and Oglesby each drove in two runs.

On the mound, Allen was the third pitcher for the Sox, following Joey Cates and Boston Heil. Bryant manager Darren Hurt has now used 13 pitchers this season and he’s hoping for a return of staff “hoss” Zach “Panda” Jackson from rehabbing an injury soon.

Of course, Hurt, who has led the Black Sox to three State championships in the last four years, knows a Legion team can never have too much pitching, especially considering that State and Regional tournaments are double-elimination brackets with nine-inning games. So he’s cultivating a deep staff for this year’s run.

Cates only allowed five hits over the first five innings but six walks made those hits more damaging. Nevertheless, he earned the win when the Sox erupted in the home fifth. Boston Heil contributed two scoreless innings of relief before giving way to Allen in the eighth.

The Sox took a 1-0 lead in the bottom of the first. Allen and Dylan Hurt each walked against Russellville right-hander Christian Ewing. With one down, Gentry lashed a single to right to get Allen in. 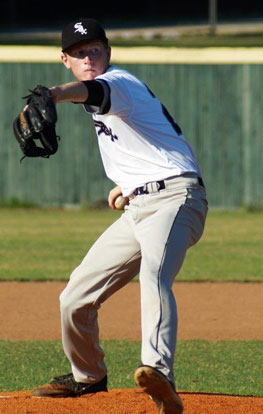 Russellville took a brief lead in the top of the third. Cates issued a walk to start the inning but, on a hit-and-run, Cole Dawson lined out to second baseman Scott Schmidt who fired to Aaron Orender at first for a doubleplay. Another walk, this time to Mason Huie, was followed by Russellville’s first hit of the game, a single by Joel Barker. Moments later, Luke Price belted a long drive to dead center for an two-run triple.

But Cats forced Russellville to strand Price at third when he struck out clean-up hitter Jordan Duvall to end the inning.

Bryant tied it when Hurt walked, Misenheimer singled him to third and Gentry got a squeeze bunt down in the home third.

Aided by a nice play by Misenheimer at third, Cates retired the first two in the top of the fourth. Will Stewart walked and Jared Dawson singled but Cates picked Stewart off of second to end the threat.

The Sox took the lead in the home fourth. Sandidge walked, stole second and scored on a clutch two-out single by Oglesby. And when Allen and Hurt each singled, it brought Oglesby around to make it 4-2.

Russellville rallied to tie in the top of the fifth. Duvall and Riley Huie had RBI singles but when Huie tried to take second on the throw to the plate, Hurt came out to meet the ball and fired to second to nail him for the third out.

A one-out walk to Aaron Orender started the explosion in the home fifth. On a hit-and-run, Tucker lined a single to right, the first of his two hits in the inning. Sandidge drove in a run with a single to left, taking second on a late throw to the plate. 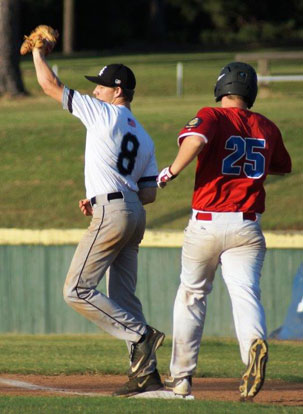 First baseman Aaron Orender takes a throw in time for the out. (Photo by Paul Dotson)

Ewing was relieved by lefty Cole Hathcote at that point but he couldn’t slow down the Sox. Schmidt’s infield hit made it 6-4. With Sandidge at third, Jake East, in as a pinch-runner, swiped second and drew an errant throw. He went to third and Sandidge scored.

Oglesby belted a double to left and it was 8-4. Walks to Allen and Hurt loaded the bases and Hathcote gave way to Nick Hagerty whose third pitch was pounded to deep right-center by Misenheimer, clearing the bags. He scored on a wild pitch to make it 12-4.

Heil worked around a hit batsman with two down in the top of the sixth. In the seventh, Barker singled with one out. Price then hit a bouncer to ticked off the glove of East as he tried to reach up and grab a high hop. Barker tried to advance to third but Allen came charging in from center and fired a strike to Misenheimer who had the ball waiting for Barker.

Heil fanned Duvall and the game went to the bottom of the seventh. Misenheimer’s third hit was a single to right with one down. With two away, Orender dumped a single into shallow right. Misenheimer hustled to third and wound up scoring when Orender swiped second and drew a bad throw.

Allen pitched the top of the eighth and, to start the home half, Sandidge cracked a drive to left that got over the head of the outfielder for a triple. With the defense pulled in all around, Hagerty induced a grounder to short from East as Sandidge held. Pinch-hitter Beaux Bonvillain struck out so Russellville was an out away from getting another at-bat. But Allen laced a 1-0 pitch into left to end it. 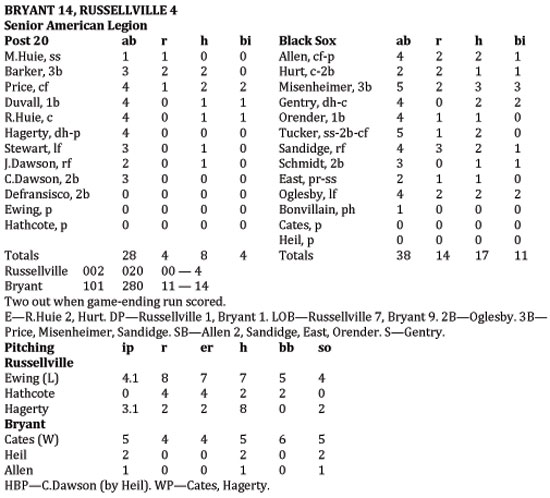