LITTLE ROCK — Since a disappointing loss to North Little Rock, a team that has struggled since, the Bryant Hornets freshman team has become a big-play offense and a very stingy defense.

The Hornets won their third game in a row and extended a shutout streak to 10 quarters in a row with a 35-0 win over the Little Rock Central Tigers freshman team at Quigley-Cox Stadium Thursday night.

Bryant hasn’t given up a point since Conway Blue managed a touchdown pass in the final 30 seconds of the first half of the Hornets’ 31-6 win three weeks ago.

In blanking Central, Bryant held the Tigers to 181 yards of total offense. And, the defense added to the scoring with linebacker Layton Dickerson picking off a pass and returning it 61 yards for a touchdown.

Offensively, the Hornets has seven plays in the first three quarters that went for more than 20 yards as they built the 35-point lead that triggered the sportsmanship (mercy) rule, a running clock.

Quarterback Carson Burnett ran for two touchdowns and threw for another. Running back Fabian Torres picked up 106 yards on just 10 carries with a touchdown.

The Hornets improved to 5-2 overall with the non-conference win going into a showdown with undefeated Central Arkansas Junior High Conference rival Cabot South on the road next Thursday.

The tone was set right off the bat. On the first snap of the game, Burnett took advantage of a defensive alignment that had no deep safety. Andrew Stueve ran a post route and Burnett hit him in stride. He caught the ball at the Central 30, was hit by a pair of Tigers around the 20, broke both tackles and, with a little blocking help from Torres, reached the Central 14.

Runs by Burnett and Torres reached the 7 then Torres’ touchdown run was negated by a holding penalty. Pushed back to the 17, the Hornets went to the air with Burnett finding Turner Seelinger with a short pass that broke for 14 yards to a first-and-goal at the 3.

Torres scored from there and it was 6-0 before the game was two minutes old.

Jason Shiflett and Brandon Jones stuffed a second-down run on Central’s first possession and, after an errant pass, the Tigers punted the Hornets back to their 23.

Torres broke for 12 yards but, moments later, Bryant faced a fourth-and-6 at the 39. A hard count by Burnett got the Tigers to jump and the encroachment penalty made it a more make-able fourth. Torres converted behind a strong surge from the offensive line.

From the 47 of the Tigers, the Hornets gained a first down on a defensive holding penalty. On the next snap, Burnett and Seelinger combined for a 36-yard touchdown pass.

Torres ran in the two-point conversion and it was 14-0 with 2:23 left in the first quarter.

The Tigers breached the 50 for the first time on their next series. But the Hornets’ stiffened and when Central couldn’t convert a fourth-and-1 at the 46, the Hornets took over on downs.

Despite a 21-yard gallop by Torres, penalties negated a pair of big gains for the Hornets, who eventually had to punt for the only time in the game. Burnett booted the Tigers back to their own 7.

They would punt it back to Bryant front their own 19.

Converting a third-and-15 at their own 37, the Hornets worked the shovel pass and Torres broke it for 38 yards. And, with just 27 seconds left in the half, Burnett laced his way through the Tigers’ defense for a touchdown from 25 yards out to make it 20-0 at the half.

Central threatened to score before the break, driving to the Bryant 15 with the help of a pass interference penalty. With time running out, quarterback Marquel Cartwright’s pass fell incomplete.

In the third quarter, the Hornets only had two offensive plays yet, they scored 15 points.

Central started the half with a drive from its own 15 to the Bryant 39, where, on a first-down play, Cartwright went back to pass only to find the Hornets’ Will Diggins and Octavio Resendiz in his face. He forced the ball out and it dropped right in the arms of Dickerson, who took it to the house.

The Tigers, in turn, picked up a first down on their way to the Bryant 45 where they were forced to punt. The kick rolled dead at the 16 but, on the first play there, Torres broke a 72-yard run to the Central 12. Burnett scored on the next play at, with a run for 2 by Torres, it was 35-0 with 1:55 left in the third quarter.

Central’s final possession went from its own 40 to the Bryant 37 where, a fourth-and-2 run by Cartwright was dropped short by Shifflett. Along the way, Chris Elder made a couple of short-yardage stops for the Hornets, who took over with 4:40 left to play.

Behind the hard-charging runs of Austin Williams, they drained the clock with quarterback Danny Johnson taking a knee once they reached the Tigers’ 36. 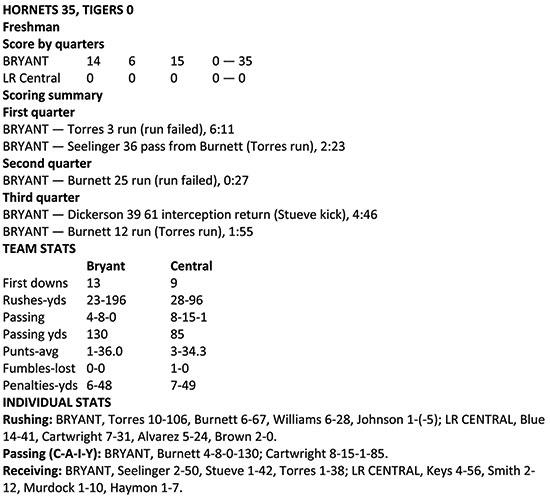 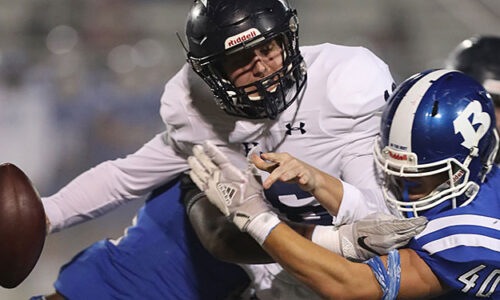