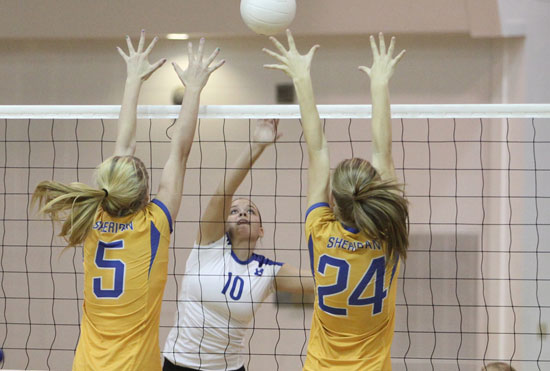 Players keep stepping in, coming through for Lady Hornets 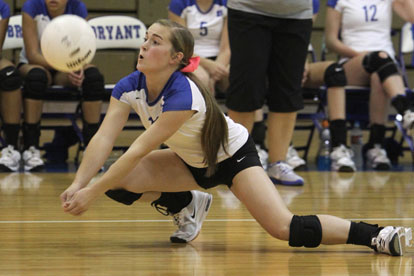 With a handful of players unavailable due to injury, Bryant Lady Hornets coach Beth Solomon keeps plugging in reserves and they keep coming through and such was the case again Thursday night. Bryant made it back-to-back South Conference wins following up a 3-0 match against Little Rock Fair on Tuesday with a 3-1 win over Sheridan.

The win improved the varsity to 5-4 in the South Conference going into Saturday’s tournament at Conway then a stern test at Texarkana on Tuesday. 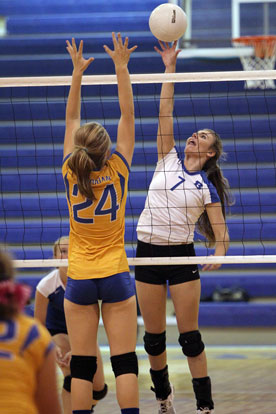 Mercedes Dillard (7) gets a hit over the net. (Photo by Rick Nation)

“Our JV did a good job getting the night started,” Solomon said. “In both JV and varsity, we had some trouble getting our passing going but were able to pull it out. Our varsity started off the night on fire in game one then slowly let down until we gave up game three to them. I challenged the girls to step it up and stay consistent and intense in game four, and they rose to the challenge.”

The Lady Hornets got a lift from Rylee Phillips, who led with seven kills. Mariah Aguilar had seven as well and added a block. Allie Anderson finished with five kills and a block. Mercedes Dillard had four kills and Dejai Kelley three.

The Lady Hornets were good on 92 percent of their serves (96 of 104) with Whitney Brown going 23 of 24, Abby Staton 16 of 17 while Kaci Squires got in all 13 and Savannah Shelton all 10 of their serves. Brown and Shelton each had three kills along the way. Staton added two.

Britney Sahlmann led with 19 assists. She also had two digs, a block, two kills and an ace. Brown came through with 17 digs and Shelton nine.

“We had Rylee go in and play right side for us tonight and she did an amazing job,” Solomon stated. “Savannah also had an amazing night stepping up and playing back row. Whitney also had a great night and became one of our best servers, after not really getting to serve all year.”

In the JV contest, Kelley and Aguilar each had six kills. Shelton had 13 assists and served for four aces while Madison Greeno served up two.