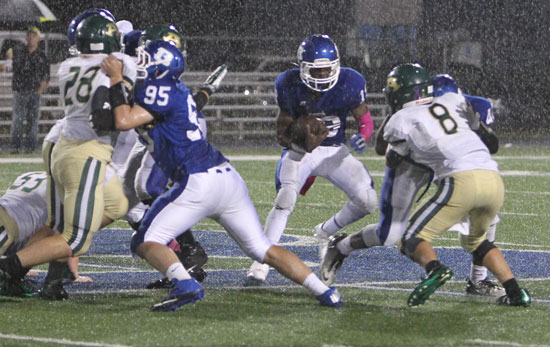 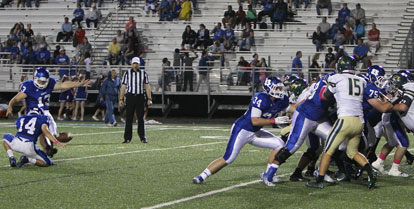 Alex Denker kicks one of his three field goals out of the hold by Madison Schrader. (Photo by Rick Nation)

Before the hour-long delay due to lightning Friday night at Hornets Stadium, Bryant was getting the best of the visiting Alma Airedales. The Hornets had built a 13-0 lead and out-gained the visitors 165 yards to 33.

When the oddly disjointed contest resumed, Alma scored 14 unanswered points and Bryant trailed later in a game than any previously this season. The Hornets went three-and-out but, after a punt by Brandan Warner, the momentum started to swing back Bryant’s way.

A personal foul penalty on the punt return left the Airedales starting their series at their own 17. On first down, Alma quarterback Evan Burris juggled a snap and Bryant defensive end Ryan Hall got to him and yanked him down for a loss. 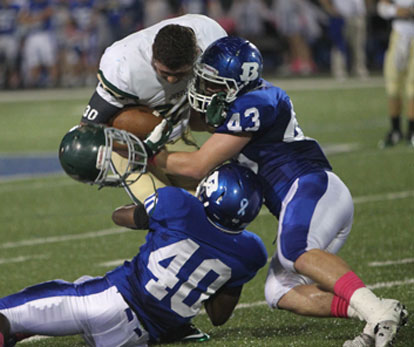 Burris, who had split time at quarterback with Alex Beneux to that point, had to be helped from the field with a leg injury.

Beneux returned and, when the snap came before he expected it, he fumbled and covered the ball back at the 6. A third-down run came up well short of the 21 yards needed for a first down and the Airedales had to punt.

Heath Friddle’s kick rolled dead at midfield and Bryant promptly drove for a touchdown on four plays, three of them runs by Warner, the Hornets’ senior quarterback, and the fourth on his pass to Quinton Royal. Warner started the drive with a 24-yard dash and, after the 17-yard throw to Royal (which would’ve gone for a touchdown but for a shoestring tackle at the 9), Warner kept twice more, scoring from the 3.

He then threw to Austin Kelly for a two-point conversion and the Hornets were on their way to a 24-14 victory, highlighted by three field goals from senior Alex Denker including his third and fourth this season from beyond 40 yards. 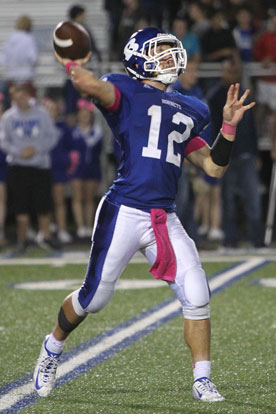 The Hornets improved to 5-0-1 overall and 3-0 in the 7A/6A-Central Conference going into a Homecoming battle with perennial state powerhouse, Greenwood. The Bulldogs will come to Bryant off a wild 42-37 loss to top-ranked Conway.

Alma, which just moved up to Class 6A this season after a storied run in Class 5A for years, fell to 3-3 overall, 0-3 in the league. The Airedales travel to Conway next week.

Warner wound up rushing for 127 yards and passing for 126. He worked much of the second half in an empty backfield, except for H-back DeMaja Price.

“When we were going 21 personnel, 22 personnel,” explained Bryant head coach Paul Calley, referring to sets with running backs in the game, “(Alma) was loading the box up, bringing safeties, bringing everybody, pretty much daring us to the throw the ball out of those sets.”

“The weather wasn’t really conducive to throwing the ball a whole lot,” Calley noted. “We threw it more than we probably have but spreading them out gave us a better chance to move the ball on the ground.”

With the empty backfield, the Hornets deployed three wide receivers to one side and another to the opposite boundary, making it impossible for the Airedales to stack the box, giving Warner room to run.

“Talking to a lot of people that had played (Alma) Coach (Doug) Loughridge over the years and played Alma, (said that) defensively, they’re going to do what they do,” Calley related. “They’re not going to change for anybody.” 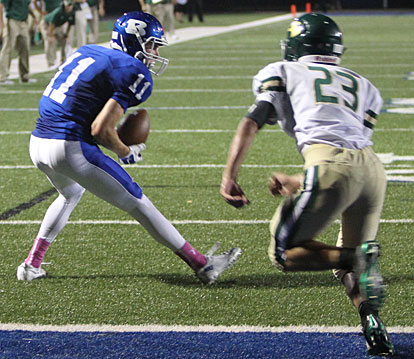 Evan Lee (11) latches onto a pass as Alma’s Josh Parker (23) moves in for the tackle. (Photo by Rick Nation)

And yet, when the game began, the Airedales had made just such a rare change on defense.

“They came out and played five down instead of four,” noted Calley. “They started the game that way. We still moved the ball. I really thought they were going to have a hard time stopping us but, going out after the break, the lull, we gave up a drive then we couldn’t move it.

“They took the lead and we responded,” he added. “I was proud to see that.”

The Hornets didn’t necessarily use the weather break like it was a halftime, the coach related.

“We gave up some things but, overall, when we had to have a play, we made it,” the coach concluded.

Not a bad trait. 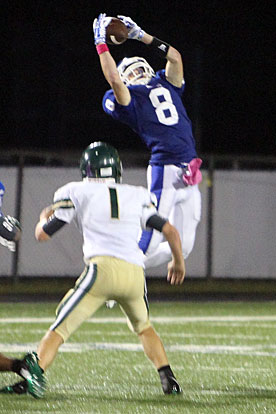 “It isn’t when you’re playing teams that you’re better than,” Calley responded. “Next week, I’ll go ahead and say it, Greenwood’s better than we are. They’ve proven it time and time again. If we’re going to beat them, we’ve got to come to practice every day with a different attitude. It can’t be like seventh grade recess. It’s going to have be intense practice time in all three phases of the game.

“I think they know that,” he said of his players. “A couple of them mentioned to me in the locker room (after the game) when I walked through that they weren’t pleased with the performance tonight. They were pleased with the outcome but they knew that, in order to beat a team like Greenwood, we’ll have to clean it up. We were a penalty machine tonight. We were last week too. We can’t have it.”

Bryant was cited for 13 penalties for 115 yards against Alma, after being flagged for 11 for 105 yards in the previous week’s win over Little Rock Catholic.

Hall led the team in tackles against Alma with nine including three tackles for losses and two sacks. Safety Steven Murdock was in on nine stops as well. He also made a big play to spoil an Alma comeback attempt, sacking Beneux, forcing him to fumble, and recovering the loose ball himself with 4:12 left in the game. Bryant ate up all of that time to close out the game.

Tackle Mario Waits and linebackers Connor Chapdelaine and Ben Bruick got in on eight stops each, end Hunter Fugitt seven.

Calley praised Hall, particularly for the sack that wound up costing Alma its starting quarterback, Burris.

“He made a good move to get to the quarterback and made an even better move to get hold of him,” the coach noted. “He and Fugitt, they’re tough. They both play wide open. Ryan stepped up and made some plays.”

The Airedales could not block defensive tackle Cameron Murray, who wasn’t among the tackle leaders but played a key role.

“A lot of people are checking into stuff away from him,” Calley said. “It frustrates him. He wants to go make plays. They’re reading him.”

Running the read-option much of the time, Alma began moving the ball on the ground when the quarterbacks started determining whether to handoff, keep or pass based on what Murray was doing.

As it turned out, though, the Hornets piled up 393 yards of total offense while holding the Airedales to 183 for the game.

Warner and Kylon Boyle each ran for touchdowns. The Hornets nearly had one more score, which would’ve sealed the win in the fourth quarter, only to fumble at the goal line with Alma recovering in the end zone.

That gave the Airedales one last chance and, thanks to a pass interference penalty on a fake-punt pass, reached the Bryant 42. But that’s when Murdock made his big play on Beneux.

Bryant’s first two drives of the night stalled but Denker drilled a 44-yard field goal with 8:25 left in the first quarter then added a 48-yarder with 2:42 left in the opening quarter. Both had plenty of distance, the latter was a yard off the school record of 49 yards set by Nick Harbert against Sheridan in 2000.

Alma, meanwhile, lost yards on two of its first three snaps as Murray, Bruick and Fugitt made plays for the Hornets’ defense.

Trailing 6-0, the Airedales, keyed by a 28-yard run by Burris, drove to Bryant’s 33 where Burris’ swing pass to Landon Brigance was stopped for no gain by Jordan McDonald and Brenden Young. On the next play, Fugitt wrestled down running back Curtis Lloyd for a loss, forcing a punt.

From their own 20, the Hornets marched the distance in 12 plays to increase the lead. Warner started the drive with an 11-yard pass to Aaron Orender and an 11-yard run. He would add three more completions to the drive. A 21-yard completion to Savonte Turner was mostly negated by a holding penalty but Turner ran for a first down then Warner broke an 18-yarder, slipping on a cutback at the 12.

Giving Warner a break, junior Gunnar Burks came into the game and surprised Alma with a pass, completing it for 8 yards to the 1. Despite a penalty, the Hornets got into the end zone on Boyle’s 3-yard burst.

Moments after Denker added the extra point, lightning was sighted, forcing the delay.

Alma returned to the field with some fire and put together its first scoring drive, covering 66 yards in 11 plays. The key was a 38-yard pass from Burris to Tyler Mlaker. Murdock saved a touchdown with a tackle at the 1.

And it appeared the Hornets might make a goal line stand. Two running plays got stacked up, setting up the third-and-goal from the 2. Burris tossed the TD pass to Thomas Hall.

On the conversion, Alma lined up in the old “swinging gate” formation and snapped it to Josh Parker behind a group of blockers outside the left hash. He scrambled into the end zone and it was 13-8.

Alma took a shot at scoring again before the half only to have Young intercept Burris’ last-second heave.

The teams traded punts to start the third quarter. On Bryant’s, Denker boomed one that Friddle returned 25 yards to the Hornets’ 46, setting up the Airedales’ go-ahead touchdown, which was led by Beneux. He got the touchdown from 4 yards out with 6:11 left in the third quarter. This time, the Hornets foiled the conversion try as Bruick and Devon Howard stopped Parker on the very same play.

In turn, the Hornets went three-and-out, leading to Warner’s punt, the subsequent penalty and lost-yardage tackles, which included Burris going down with injury. The Hornets drove for the lead and, in turn, forced an Alma three-and-out with Waits knocking down a pass at the line of scrimmage to foil a third-down pass.

Spurred by a 31-yard pass from Warner to Evan Lee, the Hornets drove for a final score. Denker drilled a 35-yard field goal to make it 24-14 with 9:51 left to play.

Alma managed just two first downs on two series after that. One came on a 20-yard pass from Beneux to Parker, the other on the pass interference when the Airedales faked a punt.