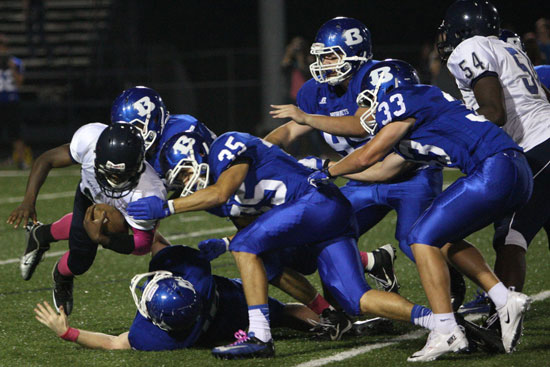 Hornets efficient in 49-0 win over Fair

When the Bryant Hornets played at Little Rock J.A. Fair in 2012, it was a drab, chilly, wet, ugly night. 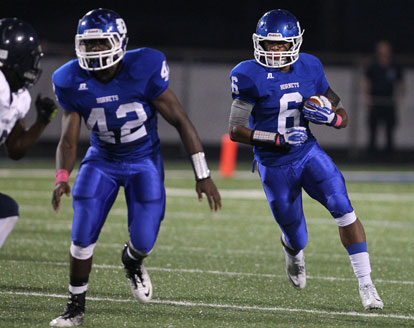 And the weather wasn’t great either.

The Hornets won a penalty-plagued grinder, 35-14.

Fast-forward a year and, on a beautiful night at Bryant Stadium, a younger group of Hornets, smarting from a 9-3 loss at home to Pine Bluff the previous week, came out focused and on task. They scored on seven of eight possessions and ended it by eating up the final 6:40 on the way to an efficient 49-0 win.

Bryant evened its overall record to 3-3 and improved to 2-1 in the South Conference. Coupled with wins by Texarkana over El Dorado and Lake Hamilton over Pine Bluff, the Hornets are in back in the hunt for a league championship, in a multiple-team tie for second place behind Lake Hamilton’s Wolves, whom the Hornets visit on Nov. 1. In the interim, they’ll need to win at Sheridan next Friday then on homecoming against the upstart Razorbacks of Texarkana. 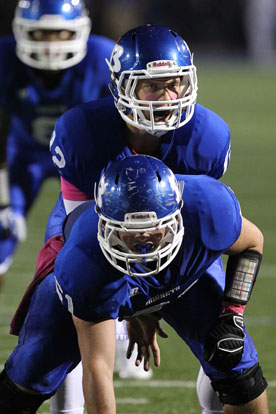 Six different Bryant running backs scored in the contest with Brendan Young the only one to score twice. Brushawn Hunter, Austin Vail, Demaja Price, Kylon Boyle and Sevonte Turner also had TD runs, part of a 277-yard performance on the ground by the Hornets. Junior quarterback Brandan Warner completed 6 of 7 passes for 95 yards.

By the end, with the clock running in accordance with the sportsmanship (mercy) rule, everybody got into the game for Bryant.

To open the game, Bryant drove 60 yards in just four plays, keyed by Hunter’s 31-yard dash. Young muscled in from the 9 for the points. The extra point was booted by Alex Denker, one of three kickers who delivered PATs.

Senior defensive end Austin May, who seemed to be in the Fair backfield much of the first half, had a tackle for a loss on Fair’s first series, which resulted in a punt.

Tanner Rich would lead the Hornets with six tackles. Ryan Hall had five. May, Jaelyn Jones, Kameron Guillory and Ben Bruick had four each. It’s telling that only May was a starter. Hornets coach Paul Calley started subbing early and often as his team piled up the points.

Bryant, which had an average starting field position of its own 17 against Pine Bluff, started its next two possessions in Fair territory. A short punt set them up at the War Eagles 37. Warner completed his first pass to Price out of the backfield for 16 yards. On the next play, Hunter, making a dead-stop cut around a Fair defender who appeared to have him squared up, sprinted 16 yards for the touchdown and it was 13-0. 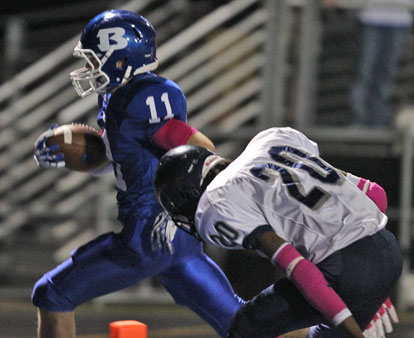 The War Eagles managed the first of their three first downs in the game on the next series but eventually had to punt. But when the snap was low and kicker Reginald Bennett had to scramble to recover it, he was tacked short of the first down. Tack on an unsportsmanlike conduct penalty and the Hornets regained possession 18 yards away from more points.

Running a reverse, Vail covered that on the first play then added the extra point kick to make it 20-0 with 3:23 still to play in the opening quarter.

Even though the game went more smoothly for the Hornets, it was still marred by penalties. The rag-tag War Eagles were cited a whopping 15 times for 101 yards in penalty yardage. Bryant was flagged three times for 20 yards. 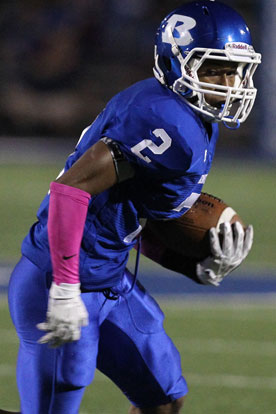 The Hornets got the ball back after a three-and-out and another short punt with 1:19 left in the first period. Starting from their own 42, they marched in on nine plays, even after a touchdown strike from Warner to Vail was called back due to a holding penalty. Young made that yardage up with a 22-yard gallop, setting up his 1-yard plunge for the 6. Vail kicked it to 27-0.

Fair went three-and-out yet again but this time turned the field over with a 45-yard punt. The Hornets were driving again highlighted by an 18-yard pass from Warner to Devonte Howard. But, once they got to the War Eagles’ 37, a fumble occurred and Fair’s Shamar Rumph recovered with 5:12 left in the half.

This time, Fair put some offense together and picked up a first down, despite a holding penalty. They reached their own 46 when, on second down, May broke through again to get to quarterback Ja’Quan Smith for a loss of 10. And when Smith tried to get rid of the ball, he was cited for intentional grounding. A play later, the War Eagles were punting again.

Bryant got the ball at the Fair 46 with 1:48 left. Warner hit Hunter for 13 yards then Howard turned a short completion into a 32-yard pick-up. He was tackled just shy of the end zone. Price powered in from the 1 on a rare fullback blast to make it 33-0 with 1:23 left in the half.

Missed extra points cost the Hornets a chance to have the mercy rule (35-point lead in the second half) kick in to start the second half but it didn’t take them long to get those 2 back. 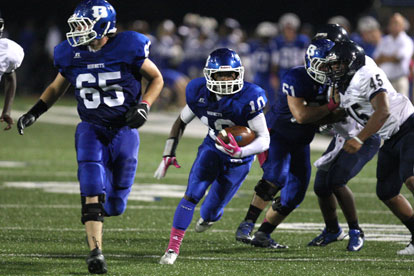 Thanks to a penalty, Fair started the opening possession of the third quarter at its own 8. Ben Bruick and Kyle Lovelace stopped running back Rasheed Mondica at the 5 then Guillory and Rich nearly pulled him down in the end zone. Though Mondica was able to get back out to the 2, on the next play, quarterback Juan Dukes dropped back into the end zone in the shotgun only to have the snap dribble past him. He retreated to pick it up as Guillory descended upon him. Dukes tried to throw the ball away and was flagged for intentional grounding, which, when it occurs in the end zone, is ruled a safety.

So Bryant had the 35-0 lead and the clock started rolling. 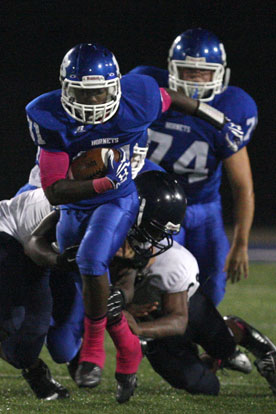 And, with the safety, the Hornets got the ball right back after a free kick by the War Eagles. Simeon Watson made a nice 17-yard return back into Fair territory and, when a face mask penalty was tacked on, the Hornets were just 28 yards from paydirt.

On four consecutive runs by Boyle, they got there. He started the drive with a 12-yard jaunt then scored from the 1. Bryce Denker added the extra point and it was 42-0 with 8:10 left in the third quarter.

The War Eagles’ frustrations began to bubble to the surface on the ensuing kickoff. Bennett returned it out to the 20 but a holding penalty and two unsportsmanlike conduct penalties (with an ejection throw in) left them at the 3.

They wound up punting from their own 9.

The Hornets started their final touchdown drive with about 1:49 left in the third quarter. Madison Schroeder completed a short pass to Darian Jarrett who turned it into a 21-yard gain. From there, Turner carried on four straight snaps. His 16-yard bolt set up his 1-yard TD.

Bryce Denker added the extra point to set the final score with about 11:05 left to play.

Fair’s last gasp ended when Bruick intercepted Dukes’ long pass. With Turner alternating with Pierce Finney and Jordan Gentry, the Hornets moved from the Bryant 30 to the Fair 23 as time ran out. 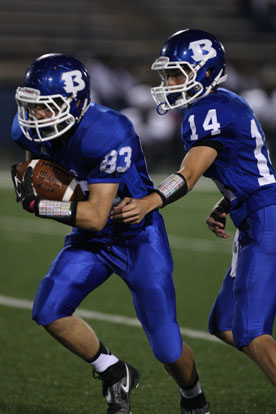