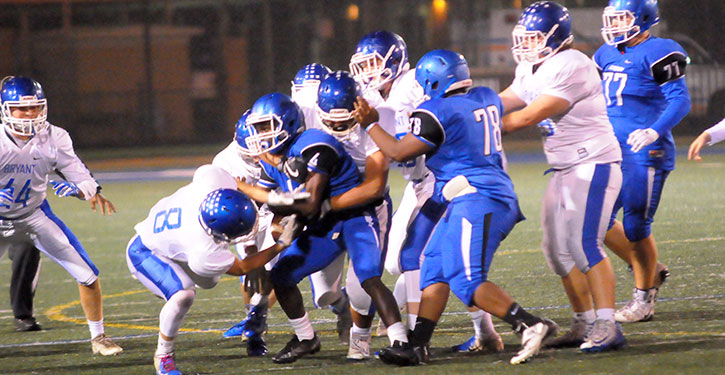 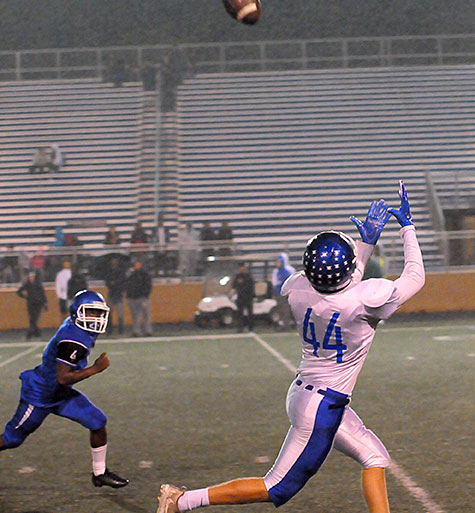 CONWAY — Chunk plays, big gains, plays on which a team picks up a chunk of yardage — the Bryant Hornets freshman team used chunk plays on four of their five touchdown drives as they earned their fifth win in a row, 33-14, over the Conway White Wampus Cats at John McConnell Stadium on Thursday night.

Quarterback Carson Burnett was 10 of 12 passing for 202 yards and two touchdowns while tailback Fabian Torres rushed for 113 yards on 13 carries. Torres scored three times, twice on the ground and once through the air. Turner Seelinger caught three of Burnett’s throws for 113 yards.

The Hornets improved to 7-2 on the season, 6-2 in the Central Arkansas Junior High Conference. With a win on Tuesday in their home finale against the Benton Panthers plus a loss by Cabot South to Cabot North, the Hornets could earn a share of the league title, along with Lake Hamilton. 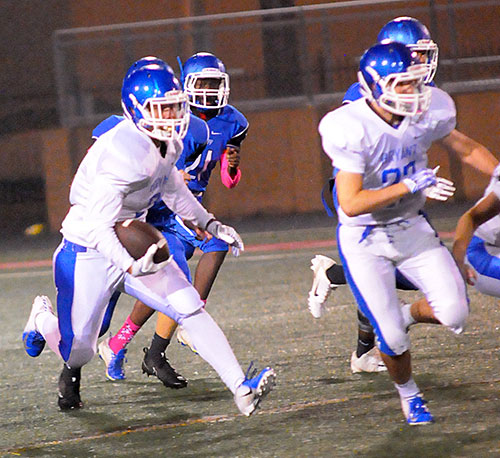 On the first play from scrimmage, the Hornets set the tone with a 51-yard touchdown pass from Burnett to Seelinger, who got behind the Conway White defense.

An extra point attempt was no good.

Conway White countered with a drive to the Bryant 34 where, on a fourth-and-3, running back Manny Smith was stopped by Shifflet and Jones short of a first down and the Hornets took over.

Individual runs by Burnett and Torres got the Hornets to the 45 then, once again, Seelinger got loose behind the secondary and Burnett found him for another 51 yards. He was dragged down at the 4. Torres scored from there and, with a run for the two-point conversion by Burnett, it was 14-0 with :35 left in the first quarter.

Conway White managed its own chunk play to get on the board before the quarter was through. Quarterback Trey Roberts threw deep down the left hash where Bryant’s Robert Hendrix was battling Conway’s Traland McClure for position. McClure somehow came down with the ball and ran it in for a 62-yard touchdown. Nathan Hutchins made it 14-7 with :02 showing on the clock. 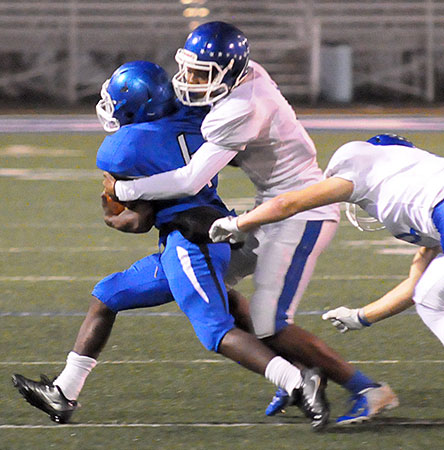 It didn’t take long for the Hornets to respond. Torres ripped a run of 12 yards then came out the backfield and down the middle of the field where he was all alone to haul in Burnett’s pass, a 53-yard touchdown. Andrew Stueve added an extra-point kick to make it 21-7 with 7:30 left in the half.

The Wampus Cats went three-and-out and a short kick at the Bryant offense back on the field at its own 33. But, this time, the drive stalled at the 49 and, for the only time in the first half, the Hornets punted it away. Burnett with a good roll, hit a 51-yard punt that put Conway White on its own 20 with 4:30 left.

Again, the Cats went three-and-out. Shifflet and Jones sacked Roberts on a third-down play. After a punt, the Hornets had the ball at their own 46 with 2:33 to go.

In six plays — the longest, a 14-yard burst by Torres — including pass completions from Burnett to Torres, Seelinger and Stueve, the Hornets beat the clock. Torres’ 5-yard run came with :42 on the clock and Bryant had a 27-7 lead at the half. 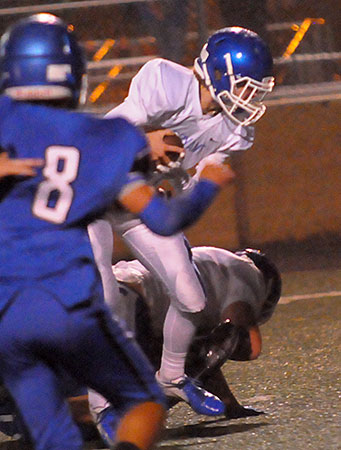 Seelinger and Burton combined on a tackle for no gain on the second play of the third quarter. Conway White tried to lateral to get Manny Smith in some broken field on third down only to have the Hornets chase him down after a 3-yard gain. That was not enough for a first down and they were punting again.

Backed up to third own 21, the Hornets came roaring out with a 32-yard gallop by Torres. A play later, Burnett threw to Stueve for 24 yards to the Conway 10.

Despite a holding penalty, Bryant found paydirt. Burnett scored on fourth down from the 2 and it was 33-7 with 2:07 left in the third quarter.

Again, the Wampus Cats couldn’t move the ball. On a third-down play, the Hornets’ Will Diggins deflected a Roberts pass as he pressured him.

Seelinger then blocked the punt of Ashton Waller and the Hornets wound up with the ball at its own 42 with the reserve offense taking over on the first play of the fourth quarter.

Behind the running of Austin Williams, they picked up a first down and wound up using over three minutes of the quarter.

Burnett came on to punt and kicked the Wampus Cats back to the 17 only to have Smith return it 52 yards to the Bryant 31. In large part due to a 20-yard completion from Roberts to McClure, the Cats scored again. Troy Wiseman took it in from the 1 with 1:33 left to play.

Hutchins added the extra point and the final score was on the board. 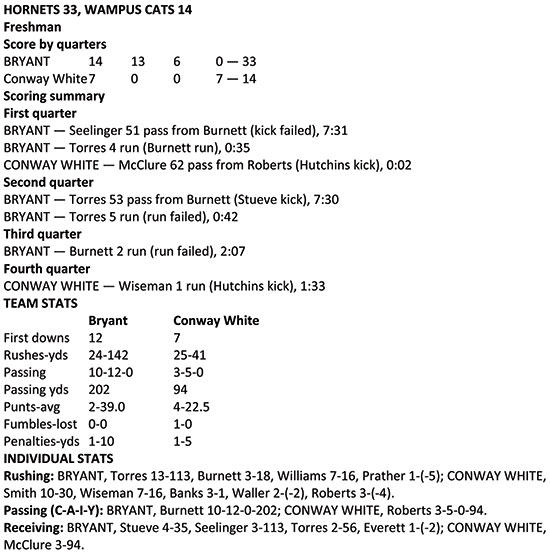