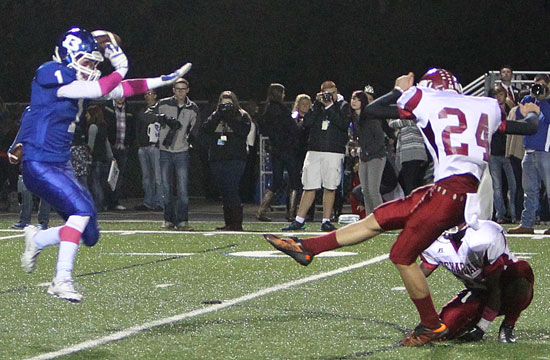 The Texarkana Razorbacks had driven from their own 29 to the Bryant 19 in six plays. With 9:57 left to play in the opening quarter, the Hornets took a timeout and defensive coaches Steve Griffith, Brad Stroud and John Wells called their squad together. 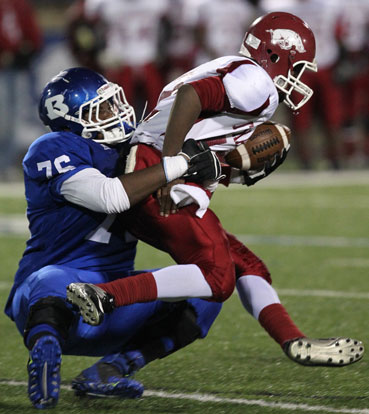 When play resumed, linebacker Bryce Denker and end Austin May dropped Razorbacks tailback Stacy Moss for a loss. Another try was stopped by Denker for no gain.

Though Texarkana quarterback DeAndre Scott scrambled for 10 yards and, with the help of a penalty, the Hogs reached the 3, they would not score. On second-and-goal, Moss was stopped for no gain. On third-and-goal, Tanner Rich, Cameron Murray and Ryan Hall hit Moss for another loss.

And when the Razorbacks tried a 22-yard field goal on fourth down, Bryant’s Drew Tipton got through to block it.

Texarkana was never that close to scoring again as the Hornets forged a 28-0 win. Brandon Warner threw touchdown passes to DeVonte Howard and Brushawn Hunter and ran for a score. Hunter finished with 139 yards rushing to go with that touchdown reception. He set up the Hornets final touchdown, a 12-yard run by Kylon Boyle. 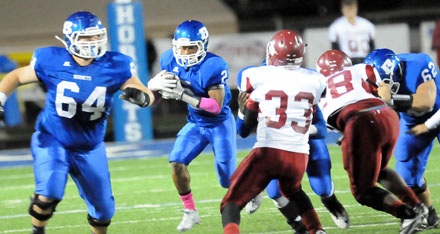 “We got set where we were supposed to be and we got a lot more aggressive and we kicked it in gear like we’re capable of,” he noted.

The shutout was Bryant’s third in a row. It’s been 14 consecutive quarters without surrendering a point, since a Pine Bluff touchdown midway through the second quarter of their game on Oct. 4.

Acknowledging that, in two of those three games, the Hornets didn’t face what you’d call offensive juggernauts, Griffith asserted, “Anytime you shut someone out, you’re very excited. I think the kids are gaining confidence. 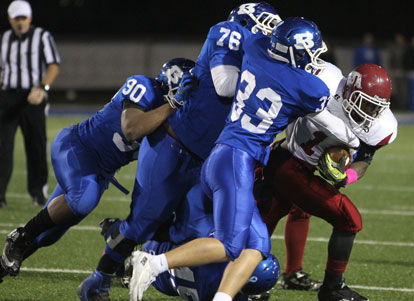 “We played very physical tonight against a football team that went to El Dorado and played extremely physical and won,” he mentioned. “But we lined up and, for the most part, stuffed their running game. We had a lot of hits at or behind the line of scrimmage. I’m proud of the effort and ready to build on it.”

The Hornets made nine stops for losses. Texarkana had 56 yards rushing on that first drive but only mustered a net of 28 yards on the ground the rest of the game.

Bryant’s offense, meanwhile, amassed 403 yards of offense including 294 on the ground despite being without leading rusher Brendan Young, out with a sore ankle. 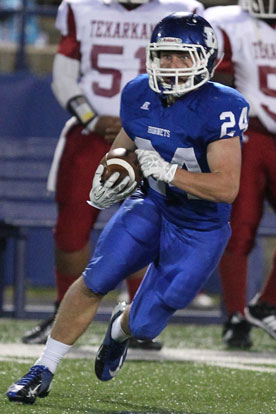 Bryce Denker returns an interception that was negated by a penalty. (Photo by Rick Nation)

“We’re glad to get away with a win,” said Hornets head coach Paul Calley. “The defense rose to the occasion and, offensively, we controlled the line of scrimmage like we needed to.

“We created some good field position,” he noted. “When we didn’t score, we flipped the field and gained field position. I was kind of worried after the first drive they had. We let them off the hook a couple of times with missed tackles. Other than that and a blocked punt, I thought we played well.”

The Hornets travel to Lake Hamilton next Friday before closing out the regular season at home against El Dorado. Their bid to win a conference championship is laid out before them.

After the blocked field goal attempt, the Hornets created the field position Calley was talking about by driving from their own 1 to midfield. The key play was the first one when Hunter took a handoff and tried to find room on the left side. Things got clogged up and it looked like he’d have a struggle just trying to avoid being tackled in the end zone for a safety. But he gave some ground, reversed his field and sliced 20 yards. Boyle followed with a 14-yard burst.

Though the drive stalled at the 50, Denker was able to punt the Hogs back to their own 6. A 10-yard run by Kaviron Oliver converted a third down but Texarkana went backwards from there. Jake Johnson dropped Oliver for a loss and, a play later, Jarron Wade hauled down Scott for a loss of 8, forcing a punt. 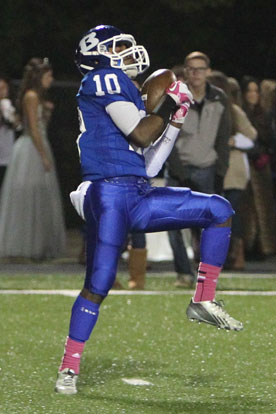 DeVonte Howard makes one of his three pass receptions. (Photo by Rick Nation)

The initial kick only made it to the Texarkana 27 but, trying to block the kick, the Hornets ran into punter Cortlen Arteberry. Though the penalty yardage didn’t get them out of their hole, the Razorbacks did get a second chance at the punt and got better results.

Initially, anyway; five running plays got the Hornets to the 15. A 15-yard run by sophomore Savonte Turner was the big play. Howard, running from quarterback in the Wildcat offense, picked up 10 to the 5 but the run was nullified due to a holding penalty.

Unfazed, Warner fired a strike just beyond the reach of Texarkana’s cornerback Providence George and right into the hands of Howard who scrambled on into the end zone for the game’s first score.

With stops by Davis Nossaman, who led the Hornets with 11 tackles in the game, then Wade and Murray on a third-down play, Texarkana went three-and-out.

The Hogs got a short field when DeAndre Jackson blocked Bryce Denker’s punt but, again, the Hornets’ defense held them without a first down. Mark Nelson and Johnson each knocked down passes. Nelson’s came on a fourth-down try with 1:04 left in the half.

Johnson was in on nine tackles, May eight, Murray seven. Rich and Bryce Denker finished with six each.

The Hornets got the ball to start the second half and proceeded to establish a stronger lead. Hunter started the drive with a 13-yard run. He concluded it by catching Warner’s pass at the Texarkana 22 and running it in for the touchdown. Alex Denker kicked it to 14-0.

The Razorbacks managed a first down on the subsequent possession but it came by penalty and over the next three snaps, they got little more. 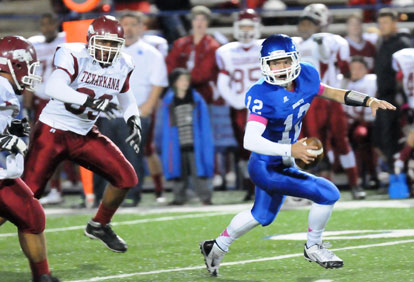 Punted back to their own 12, the Hornets again turned the field over with a drive out to the Texarkana 44. Turner contributed a 17-yard run moments after Warner threw to Howard for 9 yards.

At the 44, however, a chop block penalty negated a 15-yard run by Austin Vail. Moments later, Bryce Denker was back to punt again. Thanks to the offense moving the ball out from inside the 10, Denker was able to get a kick to roll dead at the 8.

Three plays and punt later, the Hornets offense was back in business from about the same spot they had given it up. Aided by a personal foul penalty, Bryant marched 54 yards all on the ground for paydirt. The longest run of the drive was Howard’s 11-yard scamper out of the Wildcat. He nearly scored on the next play but was stopped short at the 1. Warner returned and, on his second try, got into the end zone for the touchdown as the horn ending the third quarter sounded.

So, it was 21-0 going into the fourth quarter. Texarkana’s forturnes on offense changed little. Sophomore quarterback KeAndre Banks scrambled for 10 yards and a first down but when Nossaman smacked down Jackson for a loss on third down, it left the Hogs with a fourth-and-4.

Tipton broke up the ensuing pass and the Hornets regained possession at their own 41.

Hunter nearly broke a big run on first down, settling for 10 yards. On the next snap, he traipsed up the sideline in front of the Bryant bench for a 37-yard gain. That set up Boyle’s slashing 12-yard touchdown run and, with just over nine minutes left, the final score was on the board.

It appeared the defense had put the finishing touches on its performance when Bryce Denker came down with the deflection off a Banks pass, returning it to the Texarkana 40. But a roughing the passer penalty negated the oskie.

The result was the Razorbacks’ best chance to score since the game-opening drive. Banks hit consecutive passes to Tiiwayne White, moving the ball to within 30 yards of a score.

One the next snap, however, a holding penalty pushed Texarkana back to its own 47. Kameron Guillory pressured Banks into a poor pass on second down then, on third down, Murray tracked down the Hogs’ quarterback for a 13-yard loss.

The teams traded punts before Bryant sapped the final 2:19 off the clock on runs by Turner and Michael Martindale.