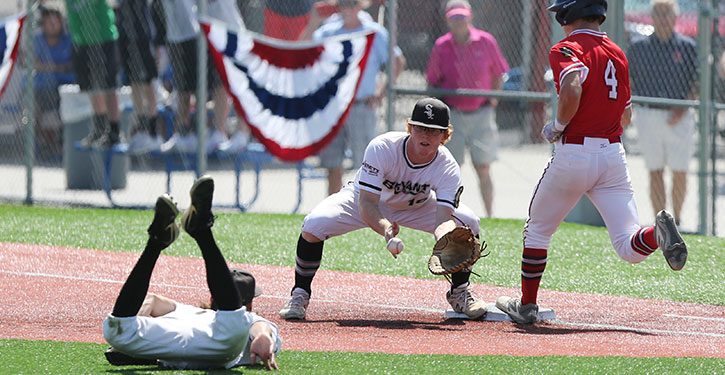 HASTINGS, Neb. — The Bryant Black Sox were set to take on Festus, Mo., for the championship of the Mid-South Senior American Legion Regional Tournament and a bid to the Legion World Series this afternoon, after holding on for a 3-2 win over host Hastings, Neb., in the loser’s bracket finals earlier today.

The Sox rallied from a 2-1 deficit with two runs in the top of the sixth then, behind the pitching of Logan Grant and Coby Greiner, earned the victory.

But it was not without tension. In the bottom of the seventh, Hastings’ Jake Shaw led off with a single to center. Nine-hole hitter Gabe Conant laid down a sacrifice bunt that Greiner had to scramble to get to. Conrad beat his throw to first for a bunt single putting the potential tying and winning run on base.

Ashton Valentine sacrificed the runners to second and third for Jake Schroeder. On an 0-2 count, he tapped to Logan Catton at third, who held the runner there and threw to first for the second out.

The Sox then chose to issue an intentional walk to Mike Boeve, who was hitting over .500 in the tournament, including a double earlier in the game.

With the bases full, Greiner got clean-up hitter J.T. Cafferty to fly to right. Grant turned to his left and ran it down near the foul line to end the game.

Grant threw 92 pitches as the starter, allowing just two hits — Boeve’s double to lead off the fourth and a one-out single by Valentine in the fifth. He retired the first two in the bottom of the sixth then gave way to Greiner, the Bryant closer. He got the third out of the inning then worked out of the jam in the seventh.

Catton and Gage Stark each had two hits of the Sox.

After Hastings had taken a 2-1 lead in the bottom of the fifth, Stark led off the sixth with a single to center. Noah Davis followed with a base hit then Peyton Dillon sacrificed them to second and third.

He was nearly safe at first and wound up tripping over Levi Spady, the first baseman, who had scrambled back to the bag to take the throw from Shaw at third. Dillon went down and had to come out of the game.

Ryan Riggs came on as a pinch-hitter and battled Boeve to a full count. On the eighth pitch of the at-bat, he drew a walk to load the bases. Stark scored on a passed ball then Greiner got a squeeze bunt down to plate Davis with the go-ahead tally.

The Sox threatened in the first when Logan Chambers walked, Logan Catton singled and Cade Drennan drew a free pass but, with one out, Hastings turned a doubleplay.

Grant pitched around an error in the bottom of the inning and a one-out walk in the second.

Bryant got on the board in the third when Greiner and Chambers singled, and Catton got a squeeze bunt down to make it 1-0. Chambers was stranded at second.

Stark led off the fourth with a double but was left on third as Hastings’ pitcher Tyson Gatto settled in.

In the bottom of the inning, Boeve’s double was followed by a balk that sent him to third. Cafferty hit one up the middle that Davis, from second, tried to backhand but couldn’t make the play. Boeve scored to tie the game. J Brooks sacrificed Cafferty to second, but Grant got M Brumbaugh to ground out to Davis and Spady to bounce out to Catton at third.

The Sox threatened to regain the upper hand in the top of the fifth. With one out, Chambers walked, and Catton singled to left. But, again, Gatto worked out of the jam.

Hastings took the lead in the bottom of the fifth. Shaw walked and Conant sacrificed him to second. He was only able to make it to third on Valentine’s single to Stark in right. But Schroeder was struck by a 2-2 pitch to load the bases with Boeve coming to the plate.

Grant got him to hit a grounder to Davis at second. He got the force but Boeve beat the relay to first to avoid the inning-ending doubleplay as Shaw scored to put Hastings up 2-1.

Cafferty flew out to Stark in right.

That set up Bryant’s rally and the dramatic finish.