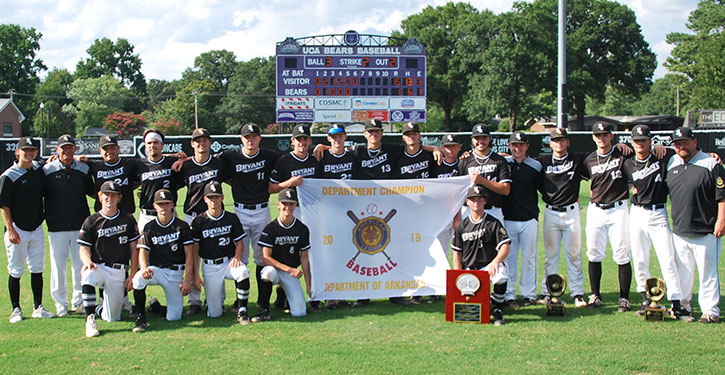 EDITOR’S NOTE: Because the look back at each day in Bryant athletic history has been so favorably received during the time when there was no sports during the COVID-19 shutdown, BryantDaily.com will continueposting past stories of Bryant athletics either posted on BryantDaily.com (from 2009 to the present) or published in the Bryant Times (from 1998 to 2008).Photos courtesy of Madison McEntire

CONWAY — For the third year in a row and the sixth time in the last eight years, the Bryant Black Sox are the Senior American Legion State champions.

The Sox finished the State tourney in Conway unbeaten including the 15-1 romp in six innings over Paragould Glen Sain GMC in the championship game on Sunday. Bryant has now won eight State titles, all since 2005.

The Sox, now 26-9, will represent Arkansas at the Mid-South Regional tournament in Hastings, Neb., starting Wednesday, Aug. 7. They’ll open against the host Hastings team in the late game, probably starting around 8 p.m. The tourney also includes champions from Oklahoma, Texas, Kansas, Missouri and Nebraska, plus the Missouri runner-up.

Along with the championship trophy, the Sox earned other State tourney awards. Slade Renfrow was named the top pitcher for going 2-0 and allowing just two runs, one earned in 11 innings with 12 strikeouts. Logan Chambers was named the MVP of the tournament after hitting .471 with eight hits in 17 at bats. Of the eight knocks, five were for extra bases. He scored seven times and drove in four.

In addition, Bryant’s Logan Catton received the Arkansas American Legion Academic Scholarship of $500, with a chance for more at each level of play up to the World Series.

The Sox hammered out 12 hits including three by Coby Greiner and two each by Chambers, Gage Stark and Noah Davis (who hit .600 in the tournament). Will Hathcote picked up the win on the mound, going five innings and giving up just one run on five hits to a team that averaged almost eight runs a game during the tourney.

“No. Absolutely not. It does not get old,” declared Bryant manager Darren Hurt.

The victory gave Bryant a sweep, winning the Senior Legion title, the Junior Legion championship, and the fledgling 15U State crown this summer.

“We’ve had some really good groups and I tell you the future looks pretty good too,” Hurt said. “We had a lot of young guys that contributed to this one. So, I think the pipeline still looks awfully good.”

But Sunday’s game wasn’t so comfortably Bryant’s for a while. In fact, the Sox led just 5-1 through five innings. Paragould, which had battled back after suffering an extra-inning loss to Texarkana in the second round the previous weekend, had showed a knack for comebacks and big innings, eliminating Mountain Home, Cabot, Batesville, Texarkana and Fort Smith to get to the finals. In fact, earlier on Sunday, they trailed Fort Smith 5-2 going into the bottom of the seventh and rallied for a 6-5 walk-off win.

“That’s what we told the guys before the game,” he related. “We’re sitting there (up) 5-1 and I did not feel comfortable.

“Then, all of a sudden, the big inning happens, and we started kind of pouring it on. You could tell then we were ready to go ahead and win it.”

“The big inning” was a 10-run explosion as Paragould just ran out of pitching. The onslaught featured a grand slam by Peyton Dillon.

“I think we get good leadership from our older kids,” said Hurt when asked about the team’s success this season. The core of that leadership comes from players who were the young pups that helped the Sox reach the American Legion World Series in 2017. “We’re reliant on some young guys and they take them in. They accept them. They know we need them and they’re just part of the group.

“They don’t get talked down to, except for Peyton Dillon a little bit,” the manager quipped. “Other than that — no, you know when you have a summer like we did where we basically had two teams, a junior and a senior, but kind of half of both teams were our team — we didn’t really know what we had. We never could play together. We were always apart, it seemed like. So, I was worried about how quick we could get together.

“But we were also bringing two pitching staffs together,” he mentioned. “I knew that was going to pay huge dividends because, heck, we had 10 arms that had been throwing all summer. I mean, I can’t believe I didn’t get (Blaine) Sears in this tournament. The fact that Sears didn’t pitch, and that Jake Wright didn’t pitch — we didn’t throw any of those guys. It’s nice to bring two pitching staffs together.”

Others who didn’t pitch in the tournament but worked well during the season included Dillon, Davis, Catton, Brayden Lester and Christian Motes. Lefty Tyler Bates only threw one inning.

If anyone had been tooled to work through the losers’ bracket, it would’ve been Bryant. But they didn’t have to, earning their five wins by a combined score of 45-11.

The Sox broke out on top of Paragould after a scoreless first. Stark belted a triple to lead off the second. After Logan Grant and Dillon each lined out, Davis, who had been the Junior State Tournament MVP, came through with a single to crack the goose egg.

In the bottom of the inning, Paragould got its run on doubles by Cade Burris and Marshall Brown. Hathcote nearly got through the inning with no damage. Brown’s RBI hit came with two strike and two outs.

The Sox got that run back in the top of the third when Jake Wright walked, advanced to second on a balk, took third on Stark’s groundout then scored on a wild pitch.

Paragould threatened in the home half when, with one out, Devin Lipford singled to right and Austin Shipman reached on an error.

But Hathcote retired the next two batters (the third and fourth in the Paragould lineup) to groundout.

Glen Sain started Rees Dunlap walked Dillon and Davis to start the fourth. Dillon had swiped second then had taken third on a passed ball as Davis drew his pass. Brady Sterns was called on for relief and Greiner greeted him with a squeeze bunt that made it 4-1.

It was Greiner’s first successful sacrifice in the tournament.

Logan Chambers’ double chase in Davis to make it 5-1.

Hathcote worked around a one-out walk in the bottom of the fourth. In the fifth, Sterns retired the side in order despite surrendering a single to Grant, who was picked off first for the second out.

Two-out singles by Austin Shipman and Cade Cancilla gave Paragould a chance to cut into the lead but Hathcote stepped up again, inducing a grounder to Chambers at short for a force at second to end the inning.

The sixth-inning began with a walk to Davis. Greiner, sacrificing again, got the bunt down in such a good spot that he beat it out for a single. A wild pitch sent them to second and third where they remained with two out.

Cade Drennan spurred on the big inning with an RBI single into the hole at short. And when shortstop Jarran Brantley’s late throw to first got away, Greiner scored to make it 7-1.

Wright was hit by a pitch then Stark singled in Drennan.

And when Grant was struck by a 1-1 delivery, Sterns was replaced by Jonathan Thurman. But his first pitch was launched by Dillon for the grand slam.

Davis kept the uprising going with a single then Greiner hit a chopper to third. He beat the throw to first and, when it sailed over the head of the first sacker, Davis scored, and Greiner sprinted to third.

On the next pitch, Chambers found the gap in right-center for another triple. He scored on Catton’s single to right.

Brantley became Paragould’s fourth pitcher at that point. He struck Drennan with an 0-1 delivery before bringing an end to the onslaught with a strikeout.

Greiner relieved in the home sixth and worked around a hit batsman and a one-out single by striking out the side.