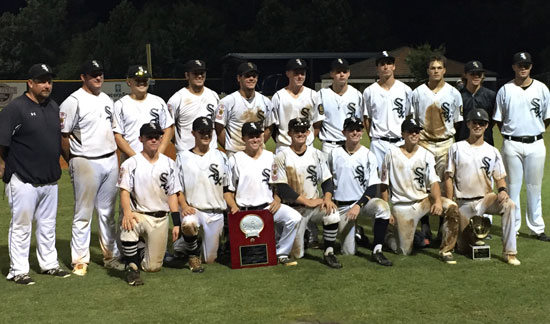 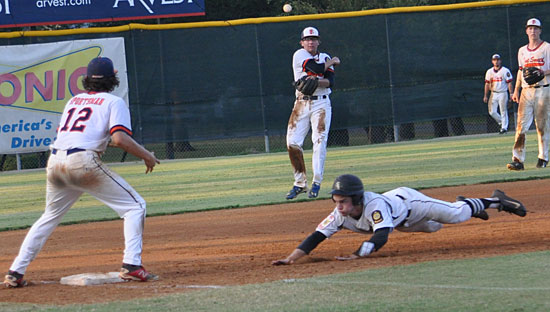 FORT SMITH — Traditionally, baseball has been steeped in superstition. You don’t step on the lines, you don’t mess with a streak and, if you’re Bryant Black Sox pitcher Zach Jackson, you wear your lucky belt.

So it was a little ominous when, with two on and two out — the potential tying run at the plate for the Fort Smith Sportsmen — in the Senior American Legion State championship game, that belt finally broke.

With all the tension the situation had built — that the game had been full of from the get-go, time had to be called so that Jackson could get rid of the two pieces of his belt. He started to go back to the mound without one, tugging at the waist of his pants. But teammate Devin Dupree brought him a replacement. Jackson laced it through the loops of his pants, buckled it up and went back to work.

He then threw six pitches to Fort Smith’s three-hole hitter Will Klek. The sixth was popped into shallow right field. Second sacker Connor Tatum faded back while right fielder Jason Hastings sprinted in and, for a moment, it looked like the ball might fall. But, at the last moment, Tatum reached up and hauled it in for the final out of Bryant 5-2 victory that secured the second State championship in a row for the Sox and their third in the last four years.

“That belt has been on its last leg for about 12 ballgames but he is superstitious so he wouldn’t take it off,” mentioned Bryant manager Darren Hurt.

Now, the big right-hander may have to wear Dupree’s belt the next time he takes the mound, which will be sometime during the MidSouth Regional Tournament at Hendrix College in Conway. The Sox, who reached the championship round of the Regional last year before being denied by Columbia, Tenn., will open play in this years Regional on Wednesday, May 5 at 4:30 p.m., against the Texas champion. 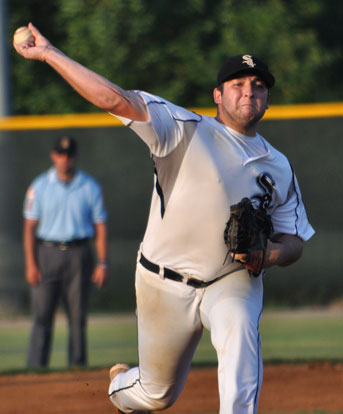 “Being State champion is always awesome, you know?” Jackson said. “Anytime you win a State championship, it’s just cool. It doesn’t matter if it’s high school or Legion. It’s one of the best feelings there is.”

“It’s always great to win a State championship,” Hurt agreed. “It feels great to get back to the Regional. We’ll see. We made a run at it last year. We’ll see if we can get to the World Series this year.”

“It kind of left a sour taste in our mouths last year but we remember it and it’s not going to happen again,” stated Bryant’s Trey Breeding, who was named the tournament’s Most Valuable Player after hitting .500 (10 for 20) over five games and contributing six shutout innings on the mound in Monday night’s game against Fort Smith that the Sox eventually lost 10-4.

In fact, that loss was the second for Bryant at the hands of the Sportsmen, the only team to beat the 36-7-2 Black Sox twice this season. (The previous setback was 10-6 back on June 11.) Three of their losses were in championship games at tournaments too. But that trend has been reversed now. Bryant won the Zone Tournament final and now the State tourney finale.

The Sox scored single runs in the first, third, fourth, fifth and eighth innings in Tuesday’s contest. Along with Breeding’s three hits, Drew Tipton, Hastings and Dylan Hurt had two hits each.

But Bryant stranded 10 base-runners so it could’ve been a more comfortable lead and when the pitch count for Jackson went up, it might’ve been easier for the manager to pull him and go to another hurler.

“We had a couple of innings where we should’ve pulled away a little bit,” acknowledged Hurt. “We had the one inning when we laid down some really good bunts, scratched a run but we also had bases juiced with one out where we should’ve added some more. We didn’t get it done there. We had another opportunity that we missed. But we got enough. We got enough big hits to get it done.”

And, as it was, Panda (Jackson’s nickname) would not come out even when Hurt intended to replace him.

“I did try after the eighth and I got chewed out pretty good,” Hurt related. “He wasn’t coming out. I was going to look like an idiot with two pitchers on the mound. So we went with him. Probably if I had it to do over again, I wouldn’t have thrown him that long. I would’ve just taken him out.”

“I told him, ‘This is my game,’” Jackson recounted. “’I know I’m at a pitch count but I would let you know if my arm was hurting. Because I’ve had Tommy John (surgery) before and I’m not going through that process again.’

“The only thing that was tired was my legs,” he noted, “but I could handle it for the last inning. Obviously, it worked well for me.

“I was nervous about it,” the pitcher acknowledged. “My arm, that’s what I relied on. It still feels fine right now. I could go three more innings but my legs wouldn’t allow it.” 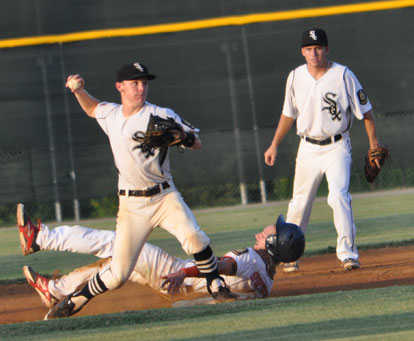 Bryant took a 1-0 lead in the top of the first off Fort Smith pitcher Grady Coleman. Brandan Warner singled with one out and, with two down, Breeding cracked his first base hit and Hastings came through with an RBI double. But Coleman got out of the jam, forcing the Sox to strand runners at second and third.

“The pitchers kept getting behind me a lot,” said Breeding. “I was ahead in the count and I kept seeing fastballs. They were there and I was seeing it good and I put a lot of good swings on them. I tried to be a little selective but when it was there I tried to get on it and it worked out.”

In the bottom of the inning, lead-off man Colby Demato walked but, on a comebacker to Jackson, he was forced at second. The batter, Christian Brasher, just beat the relay to first to avoid the doubleplay.

Moments later, however, Brasher was on the move on a 2-2 pitch to Klek. He fanned and Breeding threw Brasher out trying to steal for an unconventional doubleplay.

In the second, Fort Smith’s Tanner Wiley reached on a third-strike wild pitch but was forced at second on a grounder to Tatum on the right side. Dylan Thurber then hit a hard bouncer off Jackson’s glove to Tatum, who flipped to the shortstop Hurt for one out. Hurt’s relay to first was just in time as the Sox ended a second frame with a doubleplay.

Tipton led off the top of the third with a jolt to the base of the fence in left center for a triple. Warner delivered a sacrifice fly and the Sox led 2-0.

Jackson, who fanned nine, struck out two in the third to help get around singles by Christian Neves and Demato.

Hastings drilled a double to left to open the fourth. Hurt bunted and beat it out for a hit. Logan Allen got a squeeze bunt down with Hastings beating the throw to the plate, making it 3-0.

On a liner to third by Austin Kelly, Josh Woolly tried to double up Hurt at second but his throw was off target allowing Hurt to race to third. Momenst later, however, Fort Smith turned a doubleplay to keep it a three-run game.

The Sportsmen picked up their first run in the home fourth. Klek singled, Wiley bunted him to second and Drew Person singled. Klek was set to stop at third but the ball got away in the outfield allowing him to score. Person raced all the way to third but was stranded when Jackson struck out Thurber and got Mason Edgmon to bounce out to Blake Patterson at first.

And the Sox got the run back after two were out in the top of the fifth. Patterson worked a walk from Coleman then Breeding smacked a long double to right-center. Patterson, off at the crack of the bat, scored all the way from first to make it 4-1.

“We’ve done that all tournament,” Darren Hurt noted. “Two outs and nobody on and we find a way to score.”

Singles by Woolly and Neves put Fort Smith in position to add a run. Demato sacrificed and was only retired because of a sparkling play by Warner at third.

Brasher grounded out to short as Woolly scored then Klek bounced out to second to end the inning.

That was a psychological win for the Sox, who were leading Fort Smith 4-0 going into the seventh on Monday, when the Sportsmen erupted for seven runs.

Asked if he was nervous about the seventh in a tight game, Darren Hurt said, “I’d been nervous since the first inning to be honest. These guys can swing it. That whole lineup is scary, one through nine. We thought we had a pretty good scouting report on them but they still squared balls up.”

Edmon relieved for Fort Smith in the eighth and issued one-out walks to Allen, Kelly and Tatum. Woolly was then called up on to get out of the jam but he surrendered an RBI single by Tipton to make it 5-2.

But, despite having the bases loaded and one out, the Sox couldn’t add on as Woolly escaped further damage.

A splendid play by Dylan Hurt at shortstop on a grounder up the middle helped Jackson get around an infield hit by pinch-hitter Jordan Lawrence in the eighth. After the Sox were retired in order in the top of the inning, Fort Smith’s last chance began with Jackson’s ninth strikeout. Neves, however, stroked his third hit and Demoto got a blooper to fall in shallow right.

On the pitch that broke Jackson’s beloved belt, Brasher grounded into a force at second, putting runners at the corners for Klek. 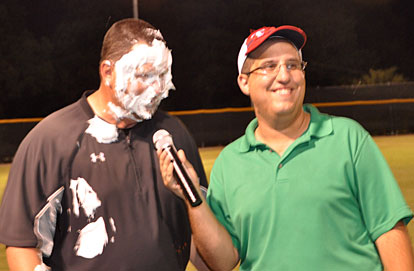 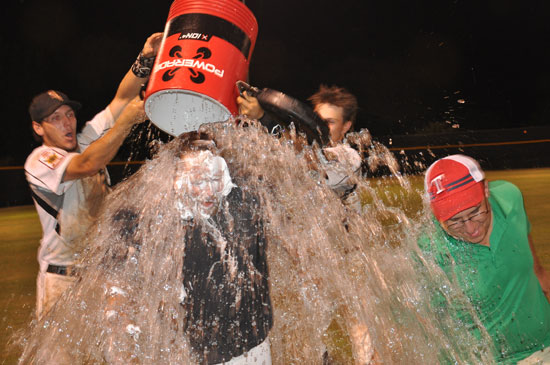