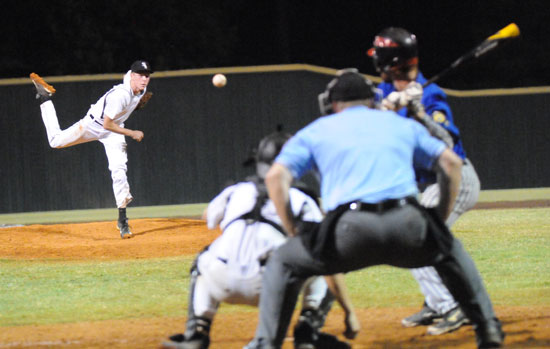 The Mountain Home Lockeroom Senior American Legion baseball team came into the 2014 State Tournament with a reputation for heavy hitting and its first two games verified that reputation as they out-hit Jacksonville 9-3 and Texarkana 10-5. 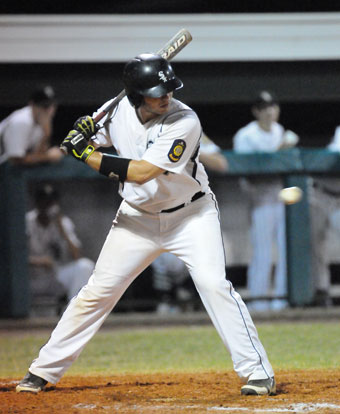 But, in the winners’ bracket final, Bryant Black Sox right-hander Blake Patterson shackled that offense on four hits over eight innings as the Sox notched a hard-earned 5-1 win, their 40th in 44 games this season.

Both teams will be back in action tonight with Mountain Home taking on league-rival Jonesboro in an elimination game at 5:30 p.m. Bryant will face its own league-rival Texarkana at 8 or so.

Bryant is guaranteed a spot in Wednesday’s championship game. With a win tonight, it will require the survivor of the Jonesboro-Mountain Home game to beat them twice on Wednesday to deny the Sox the State title. If Texarkana upends them tonight, the Sox would play Wednesday’s second game against the survivor of an early game Wednesday between Texarkana and whichever team comes out on top in the Jonesboro-Mountain Home contest.

“We’ve got to win,” stated Bryant manager Darren Hurt. “A lot of people call it the game that doesn’t matter. It matters. Anytime you’ve got to be beaten twice, that’s a huge advantage. So we’re going to go after it.” 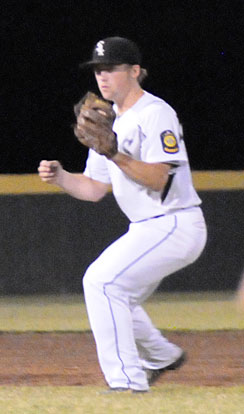 Texarkana won on an seventh-inning solo homer by Kyle Duncan, his second of the game, which snapped an 8-8 tie, as they ousted the North Little Rock Colts.

It took 12 innings for Jonesboro to get its win. Tucker Hydrick came through with the game-winning hit in the bottom of the 12th to lift his team past Cabot Centennial Bank.

That four-hour battle put the tournament behind schedule but it was followed up by the crisply pitched and played Bryant-Mountain Home contest, which took just two hours, four minutes to complete.

For Bryant, Patterson outdueled Mountain Home right-hander Josh Cathey, who went the distance, scattering 10 hits with four walks and four strikeouts. He forced the Sox to strand 11 base-runners, featuring plenty of off-speed stuff, and wound up throwing 145 pitches in the game.

The Sox scored two runs in the second and two in the third. Mountain Home scratched out its lone run in the home third then both pitchers prevailed until Bryant produced an insurance run in the top of the ninth.

The Sox were paced by Drew Tipton and Hayden Lessenberry, who had three hits each. Brandan Warner drove in a pair including the one in the ninth with a clutch two-out single.

“Another great performance,” said Hurt of Patterson’s work. “I mean, he’s done it all summer. We loved him in that spot and he didn’t disappoint. His velocity was good; his cutter and his slider — he’s got a good slider. He threw some good change-ups tonight. He just had great command of all his pitches.” 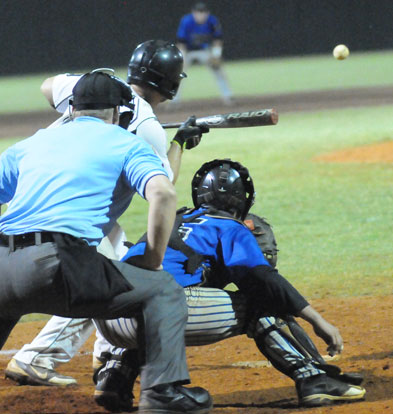 Regarding Cathey, he added, “He did a great job. From over here (in the Bryant dugout), I’m thinking, ‘Guys, why can’t we hit it.’ But I’m not the one getting in the box either. And it’s not like we were getting in there and fighting. He just did a good job on us, kept us off balance.”

The Black Sox, after losing the pre-game coin flip for the third time, making them the visitors on the scoreboard despite their host status, took a 2-0 lead in the top of the second. Lessenberry walked and Patterson singled to right. Warner, trying to sacrifice them to second and third, got the bunt down but Cathey made a nice play to get to the ball and throw to third for a force.

Trey Breeding followed with a grounder to short. With an eye towards starting an inning-ending doubleplay, shortstop Hayden Hall flipped to second baseman Quinn Ellison but the throw was errant. Not only was Warner safe at second but Breeding was safe at first as Patterson scored.

Dalton Hurt grounded into a force at second but, with two down, Cathey unleashed the lone wild pitch of the game and Warner sprinted in to make it 2-0. 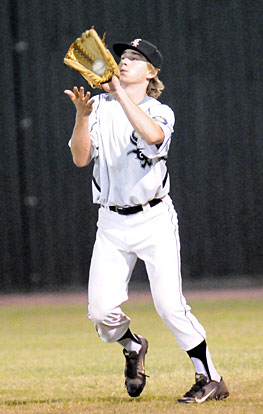 Patterson surrendered a one-out double to Hall in the bottom of the second. Austin Jacobelli reached on a tough error but the Sox ended the threat with their first doubleplay.

And the offense responded with two more runs in the third. Ezell walked and Tipton singled up the middle. Chase Tucker flew out to deep center allowing Ezell to tag and move up to third and, after Tipton swiped second, Lessenberry beat out an infield hit to drive in Ezell.

Patterson walked to fill the sacks again then Warner hit a grounder to second that drove in Tipton. The ball was booted so the sacks were jammed still, with just one out. But Cathey toughened up and retired the next two to keep it 4-0.

Mountain Home’s lone run was singled in by Austin Gardner with two down in the home third. Ellison had walked but when Kennedy Robinson tried to sacrifice, his bunt went right back to Patterson who whirled and threw to second for a force.

But Skylar Culver singled to right and, after the runners moved up on Todd Miller’s swinging bunt. Gardner singled on a 3-2 pitch to knock in Robinson.

After that, however, Mountain Home only managed to get two runners aboard in the same inning once. That was in the fifth when Culver drew a two-out walk and Miller singled up the middle. In a battle with Gardner, Patterson prevailed with a called third strike on the eighth pitch of the at-bat.

The right-hander retired the side in order in the fourth, the sixth and the eighth. In the seventh, he issued a walk to Ellison with one out but Robinson grounded into a doubleplay. 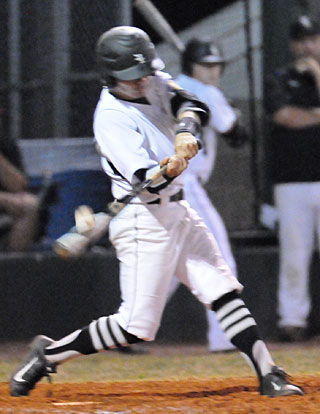 In the eighth, Lessenberry made a tremendous play to smother a hot grounder at first, hit by Gardner. Patterson covered first and Lessenberry, on his seat down the right-field line, flipped him the baseball in time for the out, ending the frame.

The Sox had hits in every inning but the eighth. In the fourth, Tipton doubled and was stranded. In the fifth Warner walked and Breeding singled before Cathey escaped. Tipton singled again in the sixth and Lessenberry smacked a base hit in the seventh.

So the game went to the ninth with Bryant up 4-1. In the top of the inning, Tucker singled to right-center and Lessenberry beat out a beautifully placed bunt towards third. With two down, Warner laced a 2-1 pitch to left for his RBI single.

Rutherford was greeted by Kyle Stephens’ single in the bottom of the ninth. But three pitches later, Hall grounded into the doubleplay. Jacobelli struck out and it was over.

Stephens, by the way, came into the game batting 1.000 in the tournament. He went 3 for 3 against Jacksonville and 5 for 5 against Texarkana. But Patterson retired him all three times he faced him.