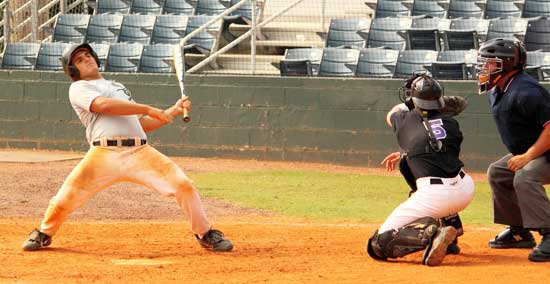 COLUMBIA, Tenn. — Brennan Bullock, running for Caleb Milam, scored on a wild pitch with two out in the bottom of the seventh to give the Bryant Black Sox a 6-5 win over the Jackson, Tenn., Thunder on Saturday morning.

The win gave Bryant, which had already secured the top seed from the pool, a sweep of its four pool games. The Sox were scheduled to begin the single-elimination championship tourney later on Saturday against Pontotoc, Miss., the team that knocked them out of the Twin Lakes Classic in Mountain Home ealier this season.[more] 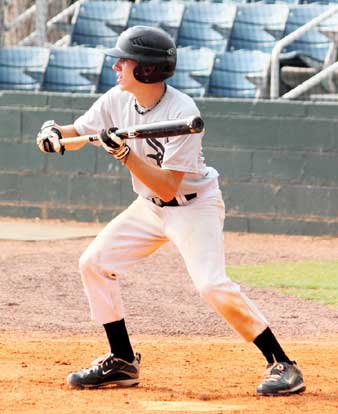 Bryant used three pitchers that made their Senior Legion debuts. Tyler Brown started and worked four innings, leaving with his team trailing 4-3. Ozzie Hurt relieved in the fifth and allowed only one base-runner (a hit batsman) in two innings. Bryant took a 5-4 lead in the sixth.

Chris Joiner came on to pitch for the Sox in the seventh and gave up the game-tying run but forced Jackson to leave the potential go-ahead runner at third.

In the seventh, Jackson starter Drew Hopkins got the first out then walked Milam. A walk to Joiner put Bryant in position to win it. Bullock came on to run for Milam and advanced to third when, after a Jackson pitching change, Evan Jobe grounded back to the mound. Pitcher Nick Leffridge turned and threw to second for the force but Jobe beat the relay to first to keep the inning going. With Hurt at the plate, an 0-1 pitch got past the catcher and Bullock rushed home with the winning run.

The Sox benefited from nine walks and three errors with six hits from six different players.

Jackson broke out to a 3-0 lead off Brown in the first. Colten Speed walked and, after Brown retired the next two batters, Dylan Yates yanked a triple into the left-field corner. David Kelso singled to make it 2-0 then came in to score after base hits by Blake Spurgeon and Porter Bell. 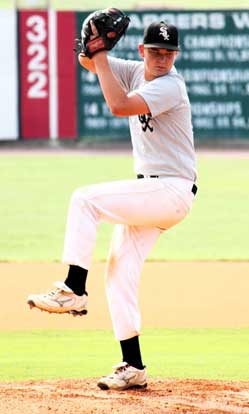 Bryant scored twice in the bottom of the inning when Mayall drew the first of his three walks in the game. He stole second and scored when Garrett’s grounder got past the shortstop. Landon Pickett drew a walk then Lucas Castleberry singled in Garrett.

Brown overcame an error and a walk in the second by getting the third- and fourth-place hitters to fly out. The Sox took came up empty in the bottom of the inning despite walks to Matt Neal and Mayall.

The third brought an additional run to both teams’ totals. With one out, Spurgeon doubled but the Sox worked a perfect relay to nail him as he tried to stretch it to a triple.

But a two-out single by Bell, an error and a balk allowed Jackson to make it 4-2. And the first two Sox were retired in the bottom of the inning before Milam drew a walk and took second on a wild pitch. Brown singled to bring him around, making it a one-run game again.

Brown finished his stint on the mound by working around a two-out single to Cameron Sherwood in the fourth. Hurt hit a batter with two out in the fifth but nothing else over two innings.

Bryant threatened in the fifth when Pickett doubled and Milam singled. But Brown tapped back to the mound and Taylor, running for Pickett, was tagged out trying to score. Evan Jobe followed with a single but Milam, trying to score with two out, was thrown out at the plate. 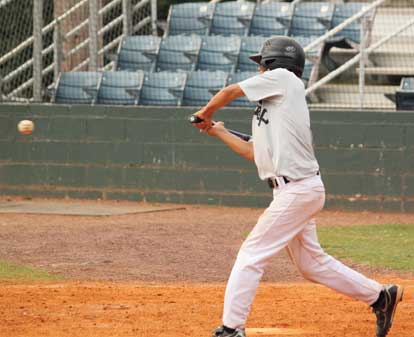 But Hurt’s work in the top of the sixth gave the Sox another shot in the bottom of the inning and they took advantage. Hopkins retired Hurt and Neal but then issued a third walk to Mayall. A balk then a wild pitch had Mayall at third for Garrett who singled him home.

With Taylor at the plate, Garrett tried to steal and drew a wild throw. And when the ball got through the center fielder as well, he was able to come all the way around to score the go-ahead run.

Trailing 5-4, Jackson greeted Joiner with a single by Sherwood. He stole second but then Joiner struck out the next two batters. Spurgeon took a strike and a ball before drilling one over Garrett’s head in center for a game-tying triple. A pitch later, however, Bell bounced to Castleberry at third to end the inning with the game even.