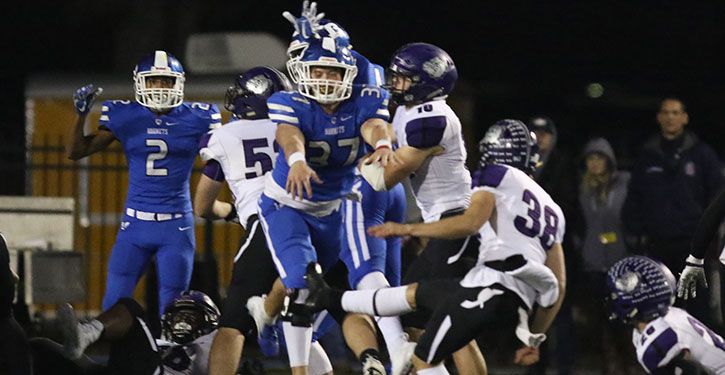 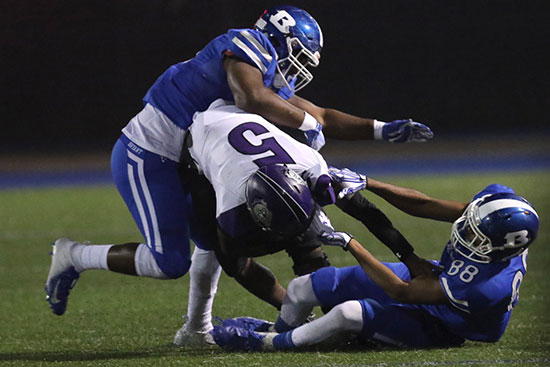 Jakob Neel just got enough, just got a hand on the field-goal attempt by the Fayetteville Bulldogs’ Huxley Richardson. The 23-yard attempt with :23.1 left to play would’ve tied the Bryant Hornets and probably sent the game into overtime. But Neel, who spent more of this season on the sidelines recovering from a knee injury suffered during the summer, got enough of the ball that Richardson’s kick sailed wide right of the goal posts in the fabled north end zone of Bryant Stadium.

And the Bryant Hornets held on for a hard-earned 28-25 victory, eliminating the Purple Dogs for the second year in a row. Bryant advances to the State semifinals for the third year in succession. They’ll play upset winner Fort Smith Northside at home on Friday, Nov. 23, for a chance to play for the State championship on Dec. 1.

The Bryant seniors will get to play one more game on their home field with a chance to end the season where they started it, at War Memorial Stadium in Little Rock.

“We were lucky to win the game,” said Hornets coach Buck James. “We kept ourselves in there. We gave ourselves a chance. It all boils down to making some plays and we made the plays. Jakob Neel hitting the ball was just enough.” 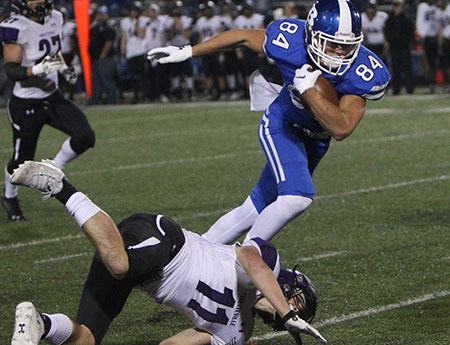 In fact, had Neel not contacted the ball, the Hornets would’ve been flagged for roughing the kicker. That would’ve moved the ball to the 3-yard line and might’ve given Fayetteville a first down. If not, they would’ve at least had another shot at the field goal.

Latavion Scott, who was held to a season-low 37 yards rushing in a 36-35 loss to Fayetteville in Week 3, pounded out a season-high 195 yards on Friday, including a 63-yard bolt that put the Hornets ahead 21-17 in the third quarter. It was a lead that Bryant did not give up.

Ren Hefley, who went 10 of 24 passing with a couple of drops and several near-misses, came through with a pair of touchdown throws. He hit sophomore Hayden Schrader from 13 yards out then found Josh Robinson beyond the Fayetteville secondary for a 66-yard TD. 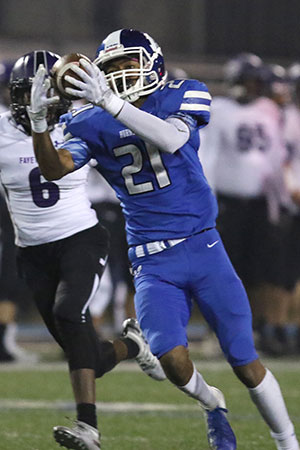 Josh Robinson hauls in a pass behind Fayetteville’s Carrington Taylor (6) on his way to the end zone. (Photo by Rick Nation)

But, perhaps one of the most clutch plays of the game came from Hefley and Schrader in the fourth quarter. The Hornets were clinging to that 21-17 lead and faced a third-and-11 at their own 37, just a play away from having to punt it back to the Bulldogs, giving them a chance to regain the lead.

Hefley found Schrader down the right sideline, between the short coverage and the deep coverage in Fayetteville’s zone. Schrader not only made the catch but cut inside and lashed to the Bulldogs’ 20, a 43-yard completion.

Patiently, Fayetteville put together a 14-play, 76-yard drive to trim the lead. It was nearly a five-minute drive that concluded with a 10-yard touchdown pass from Darius Bowers to Connor Flannigan.

With 3:28 left in the game, the Bulldogs went for a two-point conversion to get within a field goal of tying. Bowers just got in on a keeper around the left side, making it 28-25.

Fayetteville’s remarkable quarterback was 27 of 38 for 271 yards and two touchdowns.

The Hornets had a chance to run out the clock but couldn’t convert a third-and-5 from their own 25. Hefley’s pass intended for Robinson was knocked down and the Hornets were forced to punt it away, giving Fayetteville a chance to win it or tie it with that final drive that started at their 45.

A holding penalty nearly knocked the Bulldogs off schedule, but Bowers completed a clutch 24-yard pass to Flannigan. Behind the surprising running of Jacob Sharits, Fayetteville drove to the 7 where a second-down run was stopped at the 6 and a third-down pass by Bowers fell incomplete.

James used a timeout to let Richardson think about the kick that came from the right hash.

“It’s like Coach (Kirk) Bock said, it was probably a blessing that they went for 2 (earlier) and got it because they probably would’ve gone for the touchdown if they were more than 3 points down,” James mentioned. 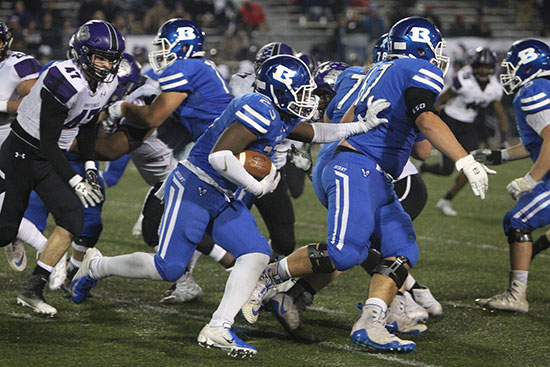 Latavion Scott holds onto offensive guard Logan Burton (67) behind tackle Blaise Smith on the way to a few of his 195 yards rushing. (Photo by Rick Nation)

The Bulldogs were held to 126 yards on the ground. The Hornets’ defense contained Bowers’ scrambling and still pressured him despite often just rushing three.

“We rushed three because we couldn’t cover their receivers,” James said.

Beau Stuckey and Flannigan each had 11 catches for the Bulldogs.

“We had to put more people back there,” the coach continued. “We felt that they would’ve thrown over us or gutted us even worse with fewer guys back there.

“We thought that maybe our three could stop their run,” he explained. “They ran the ball better than what we wanted them to or expected them to, but they never got the big play. And that’s what they’ve done to everybody. They had more big plays over the course of their season than you can count on both hands. We made them earn everything. They had to chop it out and that gave us a chance.

“Our defense is playing well,” said James. “And that was a good offensive football team we played. We talked about it taking over 30 points to win the game and we won it with 28. That’s because our defense played well.

“I laud (defensive coordinator) Coach (Quad) Sanders and his staff because, like everybody else, I’m wanting them to go get them and he just stays patient and keeps with his game plan. It kept them out of the end zone and gave us a chance to win. Everybody can say ‘what if’ and whatever. The fact is what he did worked.” 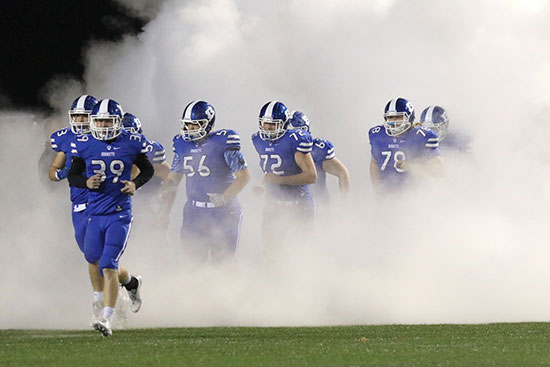 Ironically, Richardson had scored the first points of the game. His 20-yard field goal came after the Hornets held the Bulldogs out of the end zone despite them having a first-and-goal at the 3. Bryant stuffed three ‘Wildcat’ runs in a jumbo set, forcing the field goal.

The Hornets took the lead with 8:40 left in the first half on the Hefley-Schrader connection, which capped a 10-play, 74-yard drive that was launched by Scott’s scintillating 22-yard blast and a 5-yard face mask penalty that was tacked on.

Hefley converted a third down with a 9-yard pass to Jake Meaders, who made a nifty move to get the first down.

Fayetteville responded with a drive to the Bryant 44 where, on a fourth-and-3, Bowers threw short to Flannigan only to have Bryant defensive back Andrew Hayes force him out of bounds just shy of the marker.

The Hornets took over on downs and, a play into the drive, made up for a holding penalty that had them in a second-and-18 situation, with Robinson hauling in Hefley’s throw on the post route. With Grayson Scoles’ extra point, the Hornets were up 14-3 with 5:01 left in the half.

Aided by a personal foul penalty, Fayetteville roared back and cut the margin to 14-10. The Bulldogs overcame a 9-yard sack of Bowers by Nate Wallace as the Hornets extended their school record total of sacks. 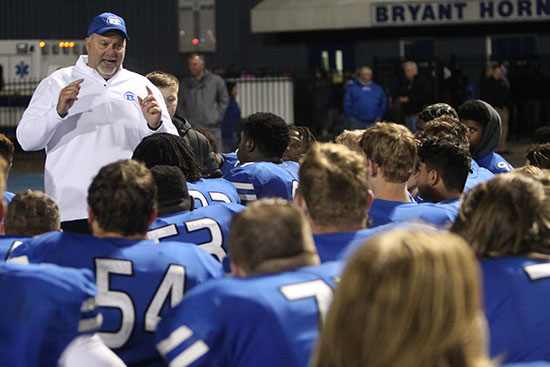 To start the second half, Fayetteville drove 67 yards in nine plays to regain the lead. Bowers was 5 for 5 on the march including a 17-yard connection with Flannigan that set up Stuckey’s 2-yard TD run.

A penalty on the subsequent kickoff backed the Hornets up to their own 8. They wound up punting from their own 24 and Fayetteville wound up with good field position to try to add to its lead.

But the Hornets’ defense came through. On a third-and-7, Bowers was sacked by Austin Bailey and the Bulldogs punted it back to the Hornets.

This time, the kick was short. Bryant took over on its 37 and, on the first play, Scott blasted up the gut and was never headed with the go-ahead touchdown.

Hornets’ safety Jabin Gulley nearly intercepted a third-down pass, forcing Fayetteville to punt it back. Bryant now had a chance to make it a two-score lead but the Hornets went three-and-out.

Big defensive plays by linebacker Jake Wright and Nate Wallace thwarted the Bulldogs’ bid for another scoring drive. The Bulldogs punted the Hornets back to their 10 and, what ensued was the kind of drive that championships are made of. Bryant drove 90 yards in 10 plays including the big completion to Schrader.

“That ball was there all night long,” James noted. “You know, we had Latavion twice and missed. Ren made the perfect throw, Schrader made a heck of a run and that play, along with the missed field goal, was probably the play of the game.”

Scott carried down to the 9 then Fayetteville was cited for an illegal substitution. From the 4, Scott got to the 2 then Ahmad Adams burst through for the touchdown to make it 28-17, setting up the heart-stopping finish.

“It’s been a good rivalry,” said James, reflecting on the four games between the two teams over the last two seasons, now decided by 6 points altogether. “That’s one of those games you know you hate to lose, and you hate for somebody to have to lose that game, especially with everything at stake. You know, I feel for them because we could’ve lost just as easily as we won.

“We’ve got to come back next week and sharpen our tool better and get to where we can execute better on both sides of the ball,” the coach stated.

He also noted that he had had teams in that situation before, more than once in State championship games.

“About five times,” James said, “and they never missed the field goal. I guess if you stay in this business long enough, it’ll go your way every once in a while.” 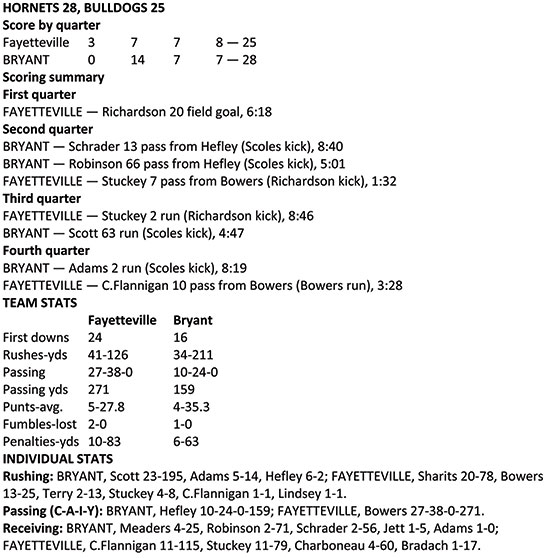