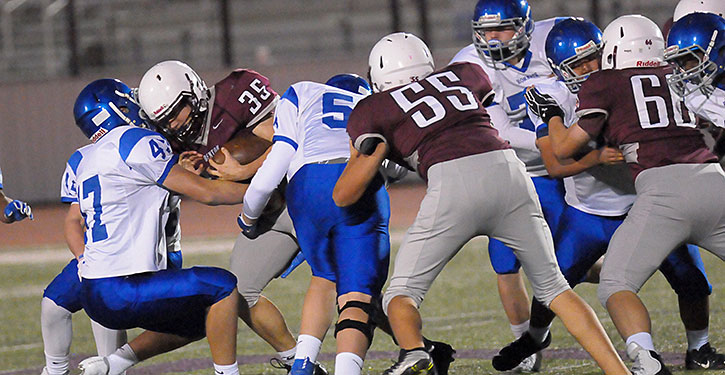 BENTON — The quick-strike ability of the Bryant Blue Hornets eighth grade team of Bryant Junior High was in full evidence on Tuesday night in their final game of the 2019 season. Jaden Ashford ran back the opening kickoff 66 yards for a touchdown and wide receiver Cason Trickey turned a short pass completion into a 56-yard touchdown as the Hornets jumped to a 12-0 lead over the Benton Panthers eighth-grade team on the way to a 35-14 victory at Panthers Stadium.

The Blue Hornets finish the season 6-2, bouncing back from their second loss last week against Cabot South to end on a high note.

It was a shootout for a while. Benton’s scored on the first play of the second half to get within 21-14 but the Hornets secured the victory by scoring the last 14 points.

Motes threw for two touchdowns and ran for another. Ashford, who finished with 129 yards on just 10 carries, scored twice.

Benton finished 5-4 on the season.

After Ashford’s opening dash, Benton drove for a first down at the Hornets’ 48. Christopher Barnard picked up 3 yards but a second-down pass from quarterback Jake Herbner to Colby Howard was snuffed out by Bryant Blue’s Aiden Hughes for not game and the Panthers couldn’t recover, turning the ball over on downs at the 44.

The next snap was Motes’ pass to Trickey.

Benton got on the board moments later when Barnard hauled in a pass from Herbner and scooted up the field for a 53-yard touchdown pass.

Bryant Blue answered. Ashford had runs of 14 and 15 yards then, after a holding penalty pushed the Hornets back from the Benton 12 to the 28, Motes and Trickey teamed up again on a second touchdown pass.

This time, Ashford ran in the two-point conversion to make it 20-6.

The Hornets used the final 4:46 of the half driving from their own 34 to the Benton 33. A holding penalty with :03 showing ended the threat.

Barnard broke a 57-yard touchdown run on the first play of the third quarter. Howard ran in the two-point conversion and Bryant Blue’s lead was just 6.

But it didn’t take them long to bump the margin up again. Motes passed to Ashford for 20 yards and, a play later, Ashford scored from 14 yards out. Trickey caught Motes’ pass for the two-point conversion to make it 28-14.

The Panthers’ last threat followed. Barnard caught a 9-yard pass from Herbner then threw a 22-yard pass to Howard. Herbner kept for 21 yards to the Bryant 30. But, on first down there, linebacker Hank Penfield dragged down Herbner for a loss of 6 and the Panthers never recovered.

Bryant took over on downs at its own 39. They drove to the Benton 12, but Khristian Turner intercepted a Motes pass and returned it to the 21.

But the Panthers went four-and-out. The Hornets took over on downs 26 yards away from a clinching score. After Motes lost 2 yards, he broke a 28-yard touchdown run that, with Jaime Perez’ extra point set the final score with 1:42 left to play.

Hughes intercepted a last-gasp pass attempt in the final minute.