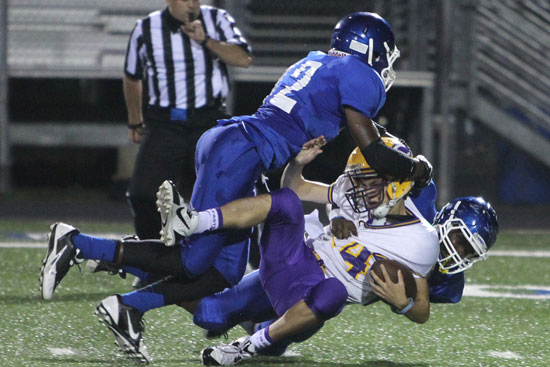 The Little Rock Catholic Junior Rockets were daring the Bryant Hornets to beat them through the air Thursday night when the two teams met in a Central Arkansas Junior High Conference game at Bryant Stadium. 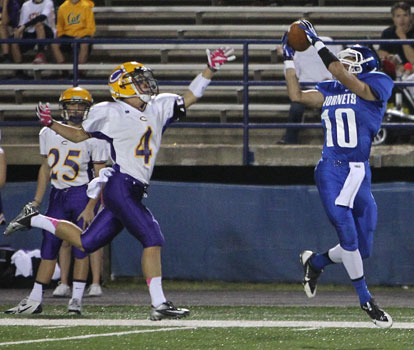 Austin Kelly (10) grabs a pass beyond the reach of Catholic’s Joseph Bilger. (Photo by Rick Nation)

So the Hornets did just that.

Hornets head coach Kenny Horn called it his team’s best performance of the year. Along with the aerial display, the Hornets held the Rockets to just 67 yards of total offense and two first downs. And if you take away the 73-yard touchdown run by Evan Hooper on a fake punt, it leaves the Rockets in negative numbers.

Catholic’s defense was set against letting the Hornets’ formidable ground game from beating them, stacking the box. The Rockets stopped the Cameron Coleman on the very first snap of the game for a loss. But the Hornets ran the ball just one other time in the first half. With his receivers working against solo man coverage, Bonvillain went to work.

In fact, on the very next play, he found Kelly streaking down the left sideline behind the coverage for a 63-yard touchdown pass.

In turn, the Rockets’ first possession was stopped when Marvin Moody sacked quarterback Connor Rahbany for an 11-yard loss on a third-down play.

Until Horn started working in his reserves in the second half, Moody and fellow defensive end DeAmonte Terry were constantly in Rahbany’s kitchen.

After a Hooper punt, the Hornets appeared to have another score when Bonvillain found Coleman on a screen pass that he broke down the sideline for a 65-yard play. But most of that was negated by a holding penalty.

Unfazed, Bonvillain came back with a 34-yard strike to East, which helped set up the 15-yard touchdown pass to Kelly to make it 12-0 with 2:57 left in the first quarter.

The teams traded punts before the last play of the opening period. Hooper dropped back to punt but took off running. The speedster (a sprint star in track) wove his way through the Bryant defense for his team’s lone touchdown. Russell Brown added the extra point.

The Rockets kicked off to start the second quarter. Coleman fielded the kick at the 13 and returned it all the way for a quick answering touchdown to make it 18-7. 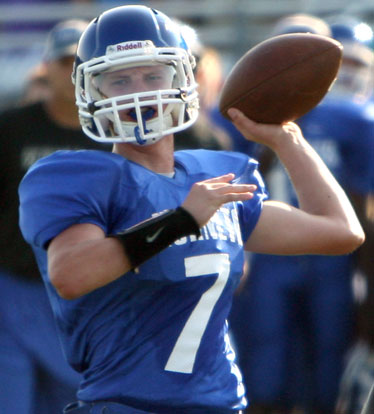 On the ensuing kickoff, Hooper fielded the ball at the 15 and headed upfield before Terry blasted him at the 30. Hooper did not play the rest of the game.

The Rockets went three and out with Parker Littleton and Nathan Mayes stopping running back Jared Thompson short on a third-down run.

Brown came on to punt and the Hornets got the ball back at their own 38. Bonvillain fired a 23-yard strike to Kelly then East got lost behind the secondary and was all alone to haul in Bonvillain’s pass, strolling into the end zone on a 39-yard touchdown play.

Chase Kincaid kicked the extra point and it was 25-7 with 4:51 still left in the half.

Terry got a sack to help force another three and out for the Rockets. Phillip Isom-Green fielded Brown’s kick on the run at the Catholic 45 and wove his way to the 5 before being stopped. A play later, Bonvillain and Kelly hooked up for the third time for a score and, with Kincaid’s PAT, it was 32-7 with 2:45 left in the half.

And the Hornets weren’t done yet.

The Rockets picked up their second first down but three straight incomplete passes not only produced another punt but kept stopping the clock. Brown’s punt, however, was fumbled and Catholic’s Trevor Hudson recovered at the Bryant 46.

It was the only time in the game that the Rockets snapped the ball in Hornets’ territory.

And when Landon Smith intercepted a third-down pass and returned it to midfield, the Hornets had another shot at scoring with :21 left. It took just one play as East latched onto another Bonvillain throw and scored as the horn sounded. Kincaid’s kick made it 39-0.

Reserves took over in the second half and they too forced a Catholic punt. Paul Rey made a stop for a loss on that opening series. The Hornets got the ball back at their own 37. Trey Ashmore dashed for 12 yards but was injured on the play. Colin Welch followed with a 30-yard jaunt.

Smith, in at quarterback, kept for 11 to the Catholic 10 but the drive stalled after reaching the 4 and Kincaid came on to drill a 25-yard field goal.

Kale Kimbrough and Jacob Loomis made nice defensive plays on the Rockets’ subsequent possession. On the punt, the snap sailed over Brown’s head into the end zone. He retrieved it and had just enough time to get a pass off, preventing a safety or a Hornets touchdown.

With 7:09 to play and the clock running in accordance with the mercy rule, the Hornets drove to the 21 before giving the ball up on downs. The Rockets went backward on their final possession and, with 3:06 left, Bryant’s Raney Singleton recovered a fumble allowing the offense to run out the clock inside the 5.

The Hornets improved to 4-2 overall and 3-2 in league play going into next Thursday’s home game against Little Rock Central.