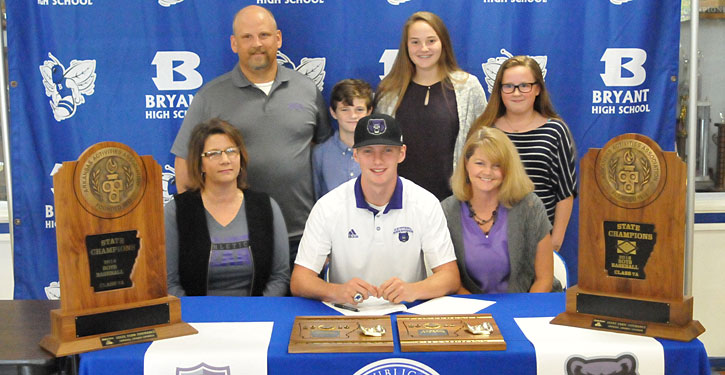 On the 2016 Bryant Hornets Class 7A State championship team, the pitching staff — 11 guys — compiled an incredible team earned run average of just 0.98 in 208 innings. They combined for 255 strikeouts, walked just 60 and allowed only 148 hits.

It’s no wonder they won the State title.

A trio of seniors led the staff, all of whom are now pitching in college — Evan Lee at Arkansas, Zach Jackson at Crowder Junior College (via Arkansas), and Alex Shurtleff at Harding University.

As of Thursday, a fourth member of that staff is headed to college on a baseball scholarship as lefty Beaux Bonvillain signed with the University of Central Arkansas.

Bonvillain, the son of Connie Martindale and Lance and Karen Bonvillain, worked kind of under the radar last spring, overshadowed by that senior trio but, consider: Bonvillain was 4-0 with an ERA of just 0.93 in 30 innings. He did some impressive pitching. For example, he tossed a four-hit shutout against Hot Springs Lakeside.

“That was the defining moment of last year for Beaux, from my perception,” Queck said. “Beaux pitched the last three innings, gave up two hits and never got rattled against a really good lineup that Benton had. I know a couple of those guys went to Division I colleges.

“Beaux came in there and competed,” he continued. “That’s the only thing Beaux knows to do. The other guys feed off of that. If you’ll watch, in the course of a game, those kids play harder. And it’s not anything anybody says, not anything Beaux says or anything. They just feed off of what Beaux does. His competitiveness, his reliability is what UCA is getting and they’re excited about it.”

But even after the high school season was over, Bonvillain hadn’t heard from UCA or anyone else. Early in the American Legion season, however, he grabbed some attention. In a tournament held in Cartersville, Ga., just outside Atlanta, Bonvillain started against a team from the Atlanta area, Team Elite South of Winder. He proceeded to spin a three-hitter and strike out 13. Among those that got word of it was UCA’s head coach Alan Gum.

“I threw really well,” Bonvillain admitted. “I guess he heard about it. He came to some of our games after that. I didn’t really know if he was looking at me or not. He contacted me and talked to me about some things and we went from there.

“I loved it,” he said of the UCA campus, which he toured on an official visit to Conway. “It’s a beautiful campus, nice field.

“They’re getting a guy that has not even come close to reaching his full potential,” stated Black Sox coach Darren Hurt. “He’s a guy that’s probably looking at sophomore or junior in college before we really see how good he’s going to be. I think they got them a steal.

“And I think that’s what they see in him, a guy who’s been playing football, a two-sport guy, and once he focuses on one, there’s no telling,” he added. “Right now, he can throw 81 to 83 and get outs. When he starts adding velocity and things, he’s going to be tough.”

Noted Queck, “We’ve got throwers and we’ve got pitchers and Beaux is definitely a pitcher. He understands the game. He understands what’s happening, what that hitter is trying to do to him. When he has that arsenal — not just having the ability to throw different pitches but to know, ‘I can get this guy backwards, starting him off with an off-speed pitch then throwing a fastball and maybe cutting a fastball.’

“He’s lethal, a very effective pitcher,” Queck said. “He understands who he is. He doesn’t try to be somebody else, which is tough to do when Major League Baseball is displaying all those big arms.”

Pitching backwards is a way to say that a pitcher can get off-speed pitches over the plate when a batter is expecting fastballs, and vice-versa.

“Cutter, curveball and change-up,” Queck said, listing Bonvillain’s off-speed reportoire. “That allows him to get in on righties or go away from righties and have some up and down movement to change the eye level a little bit. He does real well keeping that ball low, gets a lot of groundballs.”

“That’s one thing I know UCA talked about,” Hurt mentioned. “He can command every pitch that he throws. That’s huge. He doesn’t give in to hitters and throw them fastballs in a fastball count. He doesn’t have to do that.”

“I like to keep them on their toes; never let them sit on a pitch,” Bonvillain explained. “That’s when you get in trouble. The curveball is one of my more effective pitches.”

As so many Bryant products have, Bonvillain started playing baseball early.

“I was 4 or 5, playing t-ball with my dad coaching me,” he related. “Before high school, I was playing just because I loved it. It was fun. I got to high school and realized I was pretty good at it.

“From my freshman year to my sophomore year, I kind of put on some weight, saw some velocity in my fastball,” the lefty continued. “Then I got a lot more movement on my stuff being in the program with Coach (Kirk) Bock. I started locating a lot better. I started having some success with it and that’s when I thought I could do this.

“Coming in every morning at 5:30 then seeing it pay off with all the wins and the championships, it goes to show that all the hard work pays off,” he said. “It makes me not think twice about working hard for something.”

Asked about what Gum said his plans for his most recent signee would be, Bonvillain said, “He told me that he wouldn’t have offered me if he wanted me to redshirt my first year. I expect to play at least a little bit my freshman year, have an impact of some sort.”

Right now, Bonvillain is about to start the playoffs with the Hornets football team. They play tonight at home against Springdale. He has been part of a quarterback-by-committee contingent. He’s completed 55 of 99 passes (56 percent) for 461 yards and a touchdown with just three interceptions in 10 games. After a 2-2 start, the Hornets are 7-3.

“We dropped a few at the beginning of the season,” Bonvillain noted. “We started working harder and focusing in more on some things and started seeing some success with it.

“If you want to point to someone who has followed the path that we’ve laid out for them, it’s Beaux,” said Queck, who is the linebackers coach on the football staff. “He’s done the right thing from his freshman year to his junior year and I already know what he’s going to do his senior year. I can foresee that, for one thing, through his hard work in football and the leadership that he displays there.”

“He has a way about him where things don’t really seem to bother him,” Hurt mentioned. “A lot of times, people asked ‘Why is he out there smiling?’ It’s because he’s really having a pretty good time. He’s competing but he doesn’t let things bother him. They hit a homerun and he’s getting ready to go get the next guy.”