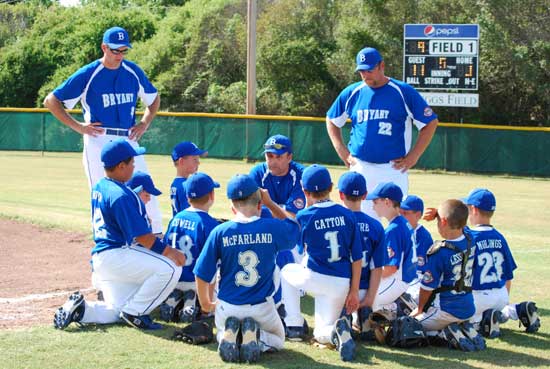 JACKSONVILLE — Starting pitcher Logan Chambers turned in a solid performance with eight strikeouts and the bottom three spots in the lineup drove in four runs and scored five times as the Bryant 9-year-old All-Stars trounced Camden 11-1 in their second game of the 2010 state championship at Jacksonville’s Excell Park on Friday, July 10. 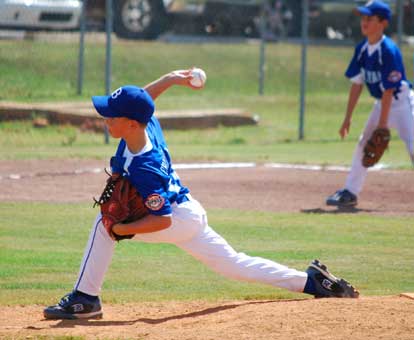 Bryant scored once in the top of the first. Leadoff batter Catton grounded a ball just inside the first base bag and hustled into second for a double. He later moved to third on a passed ball and then home on a wild pitch to give his team a 1-0 lead.

Camden’s leadoff batter in the first reached on a single to left-center, but on the first pitch to the next batter he strayed too far off of the bag and was picked off by catcher Lessenberry and eventually tagged out by Grant. Chambers then fanned the next two hitters to send the game to the second inning.

Greiner led off the top of the second with a single just inside the first base bag. Grant dropped down a sacrifice bunt and came within an eyelash of beating it out for a hit as Greiner moved to second. Greiner later took third base on a wild pitch and then scored on a wild pitch with McEntire at the plate and two outs. McEntire then stroked a solid single to center, moved up on a wild pitch, and scored when Cowell drilled a triple over the right fielder’s head. Cowell later crossed the plate on a wild pitch, making the score 4-0. 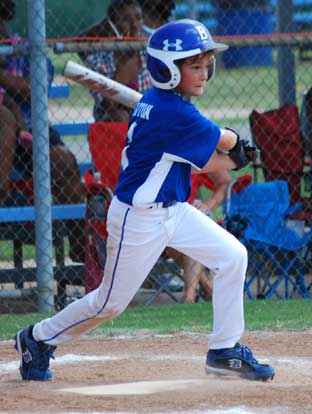 Camden pushed across their only run in the bottom of the second. With one out, the batter hit a drive into the left-center field gap for a double. He attempted to steal third and initially called out by the umpire but was ruled safe when his slide kicked the ball from Dupree’s glove. One batter later, he scored on a wild pitch to cut Bryant’s lead to 4-1.

The lead was increased to 5-1 in the third. McFarland grounded a single to left and took second on a fielding error by the left fielder. After getting to third on a wild pitch, he tagged and scored on a sacrifice fly to left by Dupree.

Bryant tacked on another run in the fourth. With one out, McEntire blasted the first pitch he saw over the center fielder for a double. Cowell grounded out to third, with McEntire advancing a base on the throw across the diamond. Catton chopped a ball over the pitcher’s head and beat it out for a single with McEntire scoring to make it 6-1. 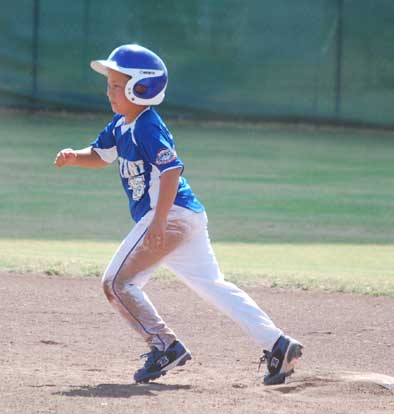 In the fifth, Bryant blew the game wide open with a five-run rally. McFarland opened the inning by reaching on an error. He moved to second on a wild pitch and continued for third when the return throw went over the pitcher’s head and he saw the third base bag unoccupied. But the Camden shortstop alertly picked up the errant throw and hit the third baseman on the run who swiped McFarland for the out.

The Camden pitcher struggled with his control and walked the next three batters, (Dupree, Greiner, and Grant) to load the bases. Nguyen pinch hit for Lessenberry and also walked, bringing in Dupree from third. McEntire’s grounder to second was bobbled for an error with Greiner scoring and the other runners moving up a base. With Holt at the plate, Grant and Lessenberry, who re-entered the game to run for Nguyen, scored on wild pitches and then Holt capped the scoring with a grounder to first that scored McEntire and make it 11-1.

After Chambers cruised through the third and fourth innings, facing just eight batters and registering his final four strikeouts, McFarland closed out the game by facing just four batters, retiring the last two on swinging strikes.

The Bryant 9-year-old All-Stars next game is against Little Rock Jr. Deputy in the semi-finals of the winner’s bracket at Excell Park on Sunday, July 11, at 4 p.m. 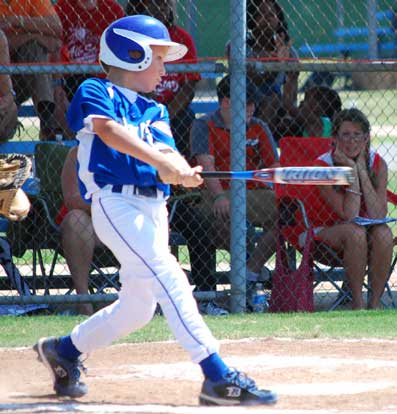 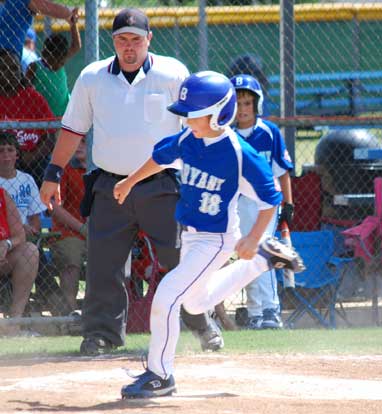 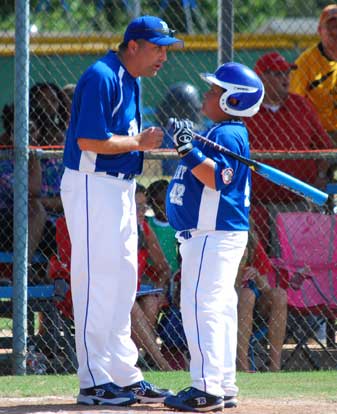