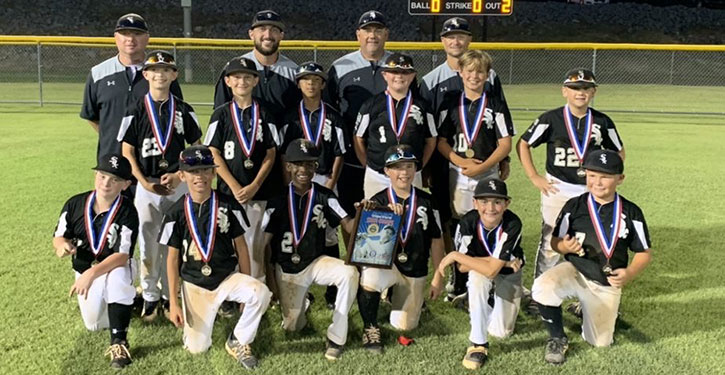 SHERWOOD — With a 10-1 romp over the rival Benton All-Stars, the Bryant Black Sox 10U team captured the Cal Ripken 10-and-under State championship on Sunday. It was their third win of the day including a 2-1 thriller in nine innings over the Paragould Lumberjacks in a semifinal. The Sox opened the day with a 9-0 victory that ousted the Sylvan Hills team of 9’s and 10’s.

“Our game against Paragould could have been the best 10-year-old baseball game played in the state,” said Coach Brown. “It was basically the championship game.”

Kelley had three hits while Thomason and Brown added two apiece. Dunn limited Benton to one run on five hits, walking one and fanning three over five innings.

The Sox struck for two in the top of the first. Kelley and Hill beat out infield hits then both scored on a passed ball.

Benton got its run in the bottom of the inning on a single, a hit batsman, a wild pitch and a two-out infield hit.

Brown’s one-out single to right instigated a two-run second. Dunn’s looping single to left was followed by a pair of pitches that got past the Benton catcher as Simmons drew a walk. A free pass to Kelley loaded the bags then another passed ball made it 4-1.

Bryant started pulling away in the top of the fourth. Brown and Dunn both got on base via errors. Wakefield tried to bunt them over, but Benton got a force at third.

Kelley, however, drilled a double to center to get Dunn home. And when the throw in got away from the third baseman, Wakefield scored.

Hill drew a walk then a passed ball allowed Kelley to score, making it 7-1.

An error and a single came to naught for Benton in the bottom of the inning as the Sox turned another doubleplay.

Thomason led off the top of the fifth with a single. Hyder drove him home with a triple into the right-field corner. With one out, Brown’s infield hit picked up an RBI to make it 9-1.

Dunn walked and, with two out, Brown scored the final run on an error just before Kelley cracked his second double.

Bryant’s third doubleplay of the game came in the bottom of the fifth after a single and an error had given Benton hope of a rally. A walk had runners at the corners before Dunn induced a grounder to Kelley at short for a game-ending force at second.

With one out in the bottom of the ninth, Markham was hit by a 3-1 pitch. Drake drew a walk then Thomason bunted for a hit to load the bases. And when the ball was misplayed by the Paragould first baseman, Markham scored the game-winning run.

Paragould and Bryant hurlers dueled the rest of the game. Simmons and Hunter split the duty for the Black Sox. Simmons worked five innings of shutout ball, allowing just two hits, walking a pair and striking out six. Hunter took over in the sixth and surrendered the tying run but kept it deadlocked through nine. He gave up just two hits, walked four and fanned four.

Bryant took a 1-0 lead in the bottom of the second when Drake ripped a double, stole third and scored on Thomason’s bouncer up the middle.

Simmons worked around a hit batsman in the first, a walk in the second and a lead-off infield hit in the third. Paragould was retired in order in the top of the fourth.

Bryant threatened in the bottom of the fourth when Thomason walked with two away and Hyder bunted for a single. But they were stranded.

Simmons walked the first batter in the top of the fifth but struck out the next two batters and ended the frame by inducing a grounder to Thomason at second.

Dunn’s double with one out in the bottom of the fifth came to naught.

In the top of the sixth, consecutive walks put Paragould in position to tie the game. The next batter fouled out trying to bunt. A fly to Simmons in right picked up the second out as the lead runner tagged and went to third. An intentional walk loaded the bases then a passed ball allowed the tying run to score.

Despite another walk, the Sox kept it tied when Hunter induced a fly to Simmons in right for the third out.

Neither team managed another baserunner until the top of the eighth when, with two down, a pair of singles gave Paragould hope. But Hunter struck out the next batter to send it to the bottom of the inning.

Brown singled to open the home eighth but, after a pitching change, the next three Sox struck out.

Hunter set down the Lumberjacks in order in the top of the ninth, setting up the dramatic finish.

Wakefield tossed a two-hit shutout over five innings, walking one and striking out sixth. Hill had two hits for the Sox including a triple. Kelley singled twice, who knocked in a pair. Simmons contributed a double.

Bryant scored four in each of the first two innings to take control of the game. The Sox would add a ninth run in the bottom of the fourth.

The opening salvo began with infield hits by Kelley and Hill. Markham was struck by a pitch to load the bases for Drake, who lined a single to left to make it 2-0.

Wakefield pitched around a lead-off single in the second then the Sox renewed their onslaught.

Dyson’s infield hit and Simmons’ double set the table. Kelley singled both home, then scored on an error to make it 7-0. With two down, Thomason’s knock chased in Hill, who had reached on a miscue.

Sylvan Hills managed its second hit to start the top of the third, but Wakefield struck out the next two and ended the threat with a grounder to second.

After a 1-2-3 top of the fourth, the Sox put the finishing touches on their scoring. Hill tripled and scored on a wild pitch.

A two-out walk was all Sylvan Hills could muster in the top of the fifth as the game concluded.