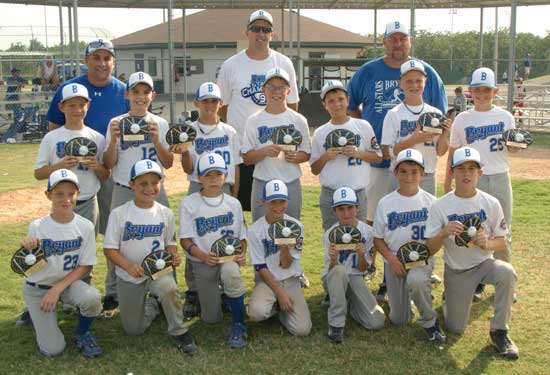 After going 2-0 in pool play on Saturday with a 15-0 win over Lakewood and a 17-6 victory over the North Little Rock Stallions, Bryant entered bracket play as the #1 seed.

Matched against Lakewood again, Bryant fell behind 1-0 when Lakewood’s second batter of the game doubled to right and later came around to score on an error. After going scoreless in the first despite a couple of well-hit balls, Bryant took the lead in the bottom of the second. Dupree started the rally with a single to left and ended up on third after the left fielder mishandled the ball. Clontz scored Dupree with a grounder to the shortstop and was safe when the first baseman dropped the throw. Jackson singled Clontz to second and then both runners moved up on Mullings sac bunt. A liner to center by McEntire scored both runners to make it 3-1.

Lakewood threatened in the top of the third when their first two batters singled but their rally was snuffed out by poor base running. Bryant’s catcher Jackson picked the runner off second for the first out. Dupree cut down a runner at the plate trying to score on a grounder to third for the second out. The inning ended when a Lakewood runner was picked off and an out was recorded out at third base.

Bryant increased their lead to 4-1 with a run in the fourth when Lessenberry led off with a single and scored on Bariola’s double to right-center. Bryant made the final score 7-1 when the tallied three in the bottom of the fourth. Dupree and Clontz walked and each eventually scored on wild pitches. Mullings also drew a walk and scored on a single to center my McEntire.

In the championship game in a rematch with the North Little Rock Stallions, Bryant posted a 12-2 win. Catton led off and reached when the shortstop dropped a pop up. Grant then singled a ball to the third baseman to put two on. Starting pitcher Chambers helped himself with all the runs Bryant would need when he hammered a 3-2 pitch over the fence in dead center for a three-run homer.

The Stallions got on the board with an unearned run in the top of the second but Bryant responded with three more in the bottom of the second. Mullings reached on an error and McEntire walked. Bariola’s single to left scored Mullings and moved McEntire to third. Lessenberry then stroked a solid single to center to plate two more and make the score 6-1.

Bryant padded their lead with two more in the third. With Chambers on third with two outs, McFarland hooked a 3-0 pitch just inside the third base line for a triple and he then scored when Dupree reached on an error.

North Little Rock plated another unearned run in the fourth to make it 8-2 but Bryant ended in the bottom of the fifth. Shepard walked and Coppick singled him to third and took second on the throw. Catton punched a single through the left side to score both runners. Grant’s single put Catton on third and he took second on a poor throw. With the infield drawn in, Chambers smacked a single to right to score both runner and give Bryant a 12-2 run-rule victory.