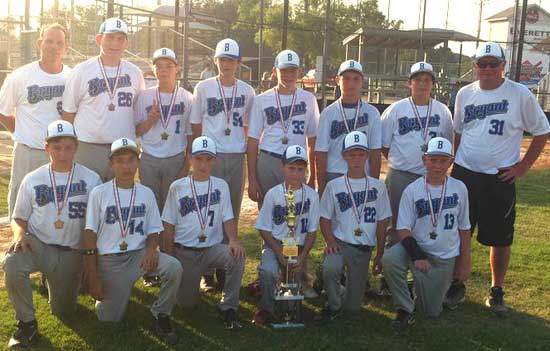 BENTON — The Bryant All-Stars finished second in the 12-and-under division at the[more] Benton Fathers Classic at Bernard Holland Park over the weekend.

Bryant opened on Saturday with an 11-4 win over the Little Rock Junior Deputy 11-year-olds. In their second game, they faced the Junior Deputy 12’s. Despite a great comeback effort, the game ended in an 8-8 tie to complete pool play.

In bracket play on Sunday, Bryant’s Stars triumphed in a thriller, 9-8, with Jake Roedel driving in the winning run in the bottom of the sixth.

That put Bryant in the championship game against the Benton 12’s.

“We lost 13-1,” reported Coach Roedel, “but played a hard-fought game and scratched until the end of the game.

“The boys showed great character and worked hard each game,” he added. “We improved with each outing and will continue to learn and prepare for our district tournament.”