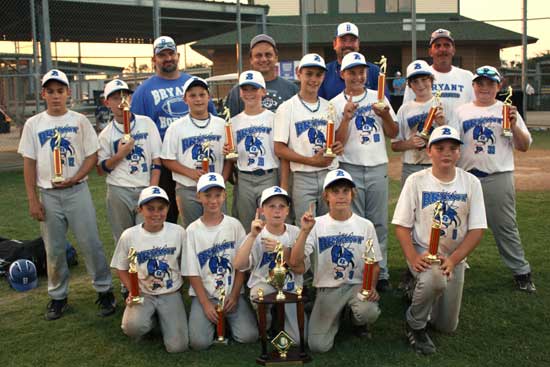 Saturday’s game against Batesville was called with the score tied 2-2. On Sunday, Bryant bounced the Paragould 12’s, 10-2, to advance to bracket play. With a 9-4 win over Poplar Bluff, Mo., they advanced to the championship game and a rematch with Batesville. They came away with a 7-6 victory and the title.

The Bryant Stars built a 6-2 lead before Batesville rallied to tie the game in the top of the fifth. In the bottom of the inning, Curtis singled with one out, stole second and third but was still there with two out when Hoover reached on an error that allowed Curtis the score the winning run.

Bryant had taken the lead in the first. After Prince and Vail both beat out a bunt hits, Prince was thrown out trying to steal third but Vail got into second safely on a steal. With two down, Buck singled him home.

Batesville tied it in the second then took the lead with a run in the top of the third. But it didn’t stay that way long as Bryant scored twice in the third. With one out, Vail bunted again and reached on an error. He stole third and scored when Dorsey singled to right-center. Dorsey stole second and, after Buck walked, Ellis singled to make it 3-2.

Pennington, on in relief of Ellis who started, worked a 1-2-3 fourth and Bryant padded the lead in the bottom of the frame. With one out, Hooever reached base and Lawhon came in to run for him. Prince and Vail singled then Dorsey cracked a double to left to make it 6-2.

Bryant fell behind 1-0 in the top of the first inning but came roaring back with two in the home half and five in the second to take control of the game. It was 9-2 going into the fourth. Poplar Bluff scored twice then time expired during the first at-bat of the bottom of the inning.

Prince led off the bottom of the first with an infield hit, stole his way to third and, after Buck drew a two-out walk, scored on the front end of a double steal. Dorsey walked as well and, after another double steal, Pennington reached on an error to bring in the go-ahead run.

After Curtis pitched a scoreless top of the second, Wright started the Bryant offense up again with a single to lead off the second. Curtis drew a walk and Green sacrificed the runners to second and third. Prince beat out a bunt and Vail walked. Ellis hit a grounder to third but a throw to the plate was not in time as a run scored. Buck singled to left, Dorsey walked and Pennington singled to cap the inning off.

Bryant scored in three of the four innings while Buck and Pennington combined to shut out Paragould over the first three frames.

Dorsey started a three-run second-inning uprising with a single. Ellis had a base hit to left center then Lawhon reached on an infield hit. When Kemp reached on an error three runs scored.

In the third, Vail walked and Green reached on a miscue. With one out, Pennington ripped a double. Buck singled, Curtis walked and, with two away, Dorsey cracked a two-bagger to make it 8-0.

Lawhon walked then base hits by Hoover and Kemp completed the scoring in the fourth.

Paragould avoided the shutout with two runs in the bottom of the inning before Ellis got the final out.