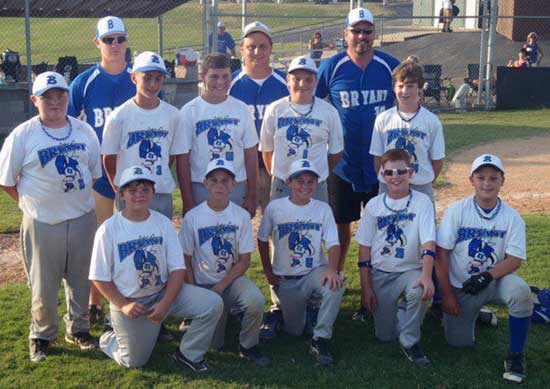 SHERWOOD — After falling victim to a six-run rally in the top of the sixth and falling behind 8-7, the Bryant 11-year-old Cal Ripken All-Stars[more] rallied for a 9-8 win in the bottom of the inning to capture the championship of the 2011 Sylvan Hills Firecracker Gold Ring Tournament over the 4th of July weekend.

The team played in the tournament as a tune-up for the 11-year-old State tourney to be held at Bishop Park starting this Friday. (Bryant plays Saturday at 11 a.m., against the winner of Friday’s opener between Camden and Benton.) 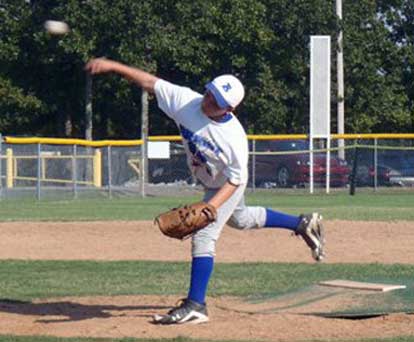 Bryant opened the Sylvan Hills tourney with a 6-3 loss to the host team in pool play on Friday but bounced back Saturday to edge the rival Benton 11’s, 5-4. In bracket play on Sunday, the Stars knocked out Jacksonville, 9-4, then, after a 30-minute break, took on Sylvan Hills again for the championship.

Bryant led 7-2 going into the final innings then went through three pitchers trying to get through the top of the sixth. Harp, the starter, had worked through five before hitting the inning-limit. Buck, the third of the Bryant pitchers in the sixth, eventually retired the side.

In the bottom of the inning, with time expired, Hoover smacked a double but was thrown out trying to get to third on a grounder to second by Harp. With two away. Harp advanced to second on a passed ball and third on a wild pitch. Dorsey walked and stole second to put the potential winning run in scoring position. Kemp followed with a bouncer to third that was bobbled. The resulting rushed throw to first was wild and both Harp and Dorsey scored to win it.

Harp shut out Sylvan Hills over the first four frames, while Bryant built a 7-0 lead. He pitched around a two-out single in the first, a walk and a double in the third and a lead-off double in the fourth. The Bryant defense threw out three of those baserunners trying to score.

The Stars broke on top 2-0 in the first. Prince led off and showed bunt. The pitch smacked his kneecap but the umpire ruled that he hadn’t pulled the bat back and he called it a strike. Unfazed, Prince got the bunt down on the next pitch. The throw to first was wild allowing him to take off for second then a return throw sailed into left field, allowing him to round the bags and score. 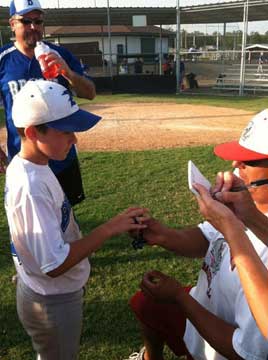 Buck drew a walk and Harp cracked a single to center. Curtis sacrificed the runners to second and third and knocked in the second run.

Buck scored again in the third when he drew a one-out walk, stole second, took third on a passed ball and raced home on Harp’s grounder to second.

The fourth was Bryant’s big inning. A one-out walk to Pennington got things going. He stole second and, after Hoover drew a free pass, they worked a double steal. With two down, Dorsey walked to load the bases for Kemp who greeted a new pitcher with a bases-clearing triple. Prince’s single brought in Kemp, making it 7-0.

Sylvan Hills’ comeback began with a couple of runs in the top of the fifth. After Bryant was retired despite another hit by Harp in the bottom of the inning, the rally commenced that put Sylvan Hills in the lead, however briefly.

Buck shut out Jacksonville over the first three innings while Bryant built a 9-0 lead. Jacksonville managed four runs in the fourth but time expired as Bryant nailed down the win to advance to the final.

A five-run first got the All-Stars on their way. Prince led off by reaching safely on an error. He stole second then advanced to third on a bunt by Buck that was good enough for a single. Buck stole second and Wright walked to load the bags. Curtis followed with a tap that the Jacksonville pitcher fielded. He threw home but Prince got to the plate first to score the first run.

Walks to Dorsey and Hilson forced in runs. Curtis tried to score on a ball that got away from the catcher but was caught on a throw back to the pitcher covering home. After a walk to Pennington loaded the bags again, Hoover reached on an error that allowed two to score to cap off the inning.

The other four runs scored in the third. Curtis was hit by a pitch to start the inning. Dorsey singled him to third and Hilson’s grounder to short produced the first run. Walks to Pennington, Hoover, Kemp and Prince followed before Buck grounded into a force, getting the ninth run home.

On the mound, Buck had worked around a walk in the first. In the second, Jacksonville loaded the bases but couldn’t score when the lead runner was thrown out trying to score on a ball in the dirt and Buck fanned the next two.

He struck out two more in the third between a pair of walks. The inning ended when Buck pickoff the runner at first.

Jacksonville got its four runs in the fourth with the help of a trio of walks before Harp came in and retired the side to end the game.

Benton rallied from a 4-2 deficit to tie the game but, in the bottom of the fourth with time running out, Bryant pushed home the winning run.

The winning uprising began with a walk to Pennington. He advanced on a wild pitch and reached third when Wright singled to left. Curtis followed with a roller on the infield, which the pitcher fielded. But Pennington beat the throw to the plate to end the game.

Bryant had taken a 3-0 lead in the first. Buck singled and stole second. With one out, Wright yanked a single into left to drive him home. He stole second and, after Curtis walked, a double steal put runners at second and third. With two out, Dorsey drove both of them home.

Benton got on the board with a run in the second off a trio of walks and a wild pitch. Prince fanned two in the inning, getting the third out on strikes to strand runners at second and third.

Bryant got that run back in the bottom of the inning. Buck singled, stole second and third then, after Pennington walked, came home on the front end of a double steal.

Three walks and a balk produced a run for Benton in the third but Wright threw out two baserunners along the way to help take the starch out of the uprising. The fourth-inning rally including two hits that took advantage of a walk and a pair of two-out errors before Curtis got the final out, setting the stage for Bryant’s winning fourth.

Bryant broke out to a 2-0 lead in the first but when Sylvan Hills scored four in the second it proved too much for the Stars to overcome.

The opening salvo started with walks to Buck and Curtis with one out. Wright singled in a run and another scored when Ellis reached on an error.

Sylvan Hills used a pair of singles to take advantage of two walks and a two-out error to take its 4-2 lead in the second. Another run scored in the third before Bryant pushed a run home in the fourth. A two-out single by Ellis was followed by walks to Pennington and Dorsey to load the bases. Harp was hit by a pitch to force in the run but Sylvan Hills got out of it at that point forcing Bryant to strand three.

Three hits produced Sylvan Hill’s sixth run in the bottom of the fourth. Bryant made some noise in the fifth when Hoover reached on an error and Buck singled but the Stars were unable to dent the plate.