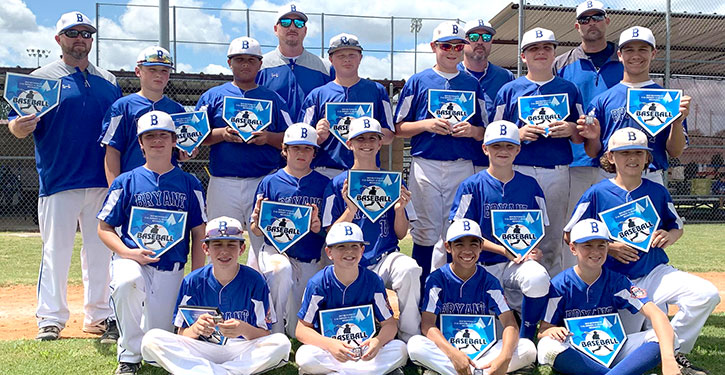 SILOAM SPRINGS — Matthews Park, Ala., completed an unbeaten run through the 2019 12U Cal Ripken Southwest Regional Tournament on Tuesday with a 10-2 win over the Bryant All-Stars. Matthews Park was so dominant in the tournament that Tuesday’s win was the closest for them in the tournament, a credit to Bryant.

Matthews Park had defeated Bryant’s Stars on Monday, 13-0, in the winners’ bracket final, but Bryant came back to eliminate the only other team still alive, Meridian, Miss., 3-2, to earn another shot.

Matthews Park scored two runs in the first and six in the second to take command of the game early on Tuesday.

Benson, Heidelberg and Keith pitched for Bryant. Benson didn’t get out of the first inning. Heidelberg, who fired a one-hit shutout earlier in the tournament, escaped further damage in the first but could not hold down the Alabama team in the second.

Bryant had four hits, two by Allen and two by Keith. Matthews Park pitchers walked just one, hit a batter and struck out nine.

A two-run homer provided the runs for Matthews Park in the bottom of the first. Heidelberg relieved and surrendered a single and a double but when the lead runner tried to score, Stout, the left fielder, and fired home to Thomason, the catcher. Bryant worked a rundown for the first out of the frame.

A groundout to Jackson at short and a bouncer to Benson at second ended the inning.

Keith singled to open the second. Duncan came in to run for him and stole second, but the next two batters struck out and a grounder to short kept Bryant off the board.

A pair of three-run homers in the bottom of the second produced the game-breaking outburst.

In turn, Bryant was retired in order in the third then so was Matthews Park.

In the top of the fourth, Allen singled, stole second and took third when Speer reached base on a third-strike wild pitch. Hernandez came in to run for Speer and stole second as Allen swiped home for Bryant’s first tally.

But back-to-back solo homers in the bottom of the fourth made it 10-1. Keith relieved and pitched around a single and a hit batsman.

Bryant got a second run in the top of the sixth. Jackson was plunked by a pitch, stole second and, after Heidelberg walked, Jackson was picked off and caught in a hotbox.

Allen singled and, with two out, Keith’s base hit to left make it 10-2.

After a pitching change, a strikeout ended the game.