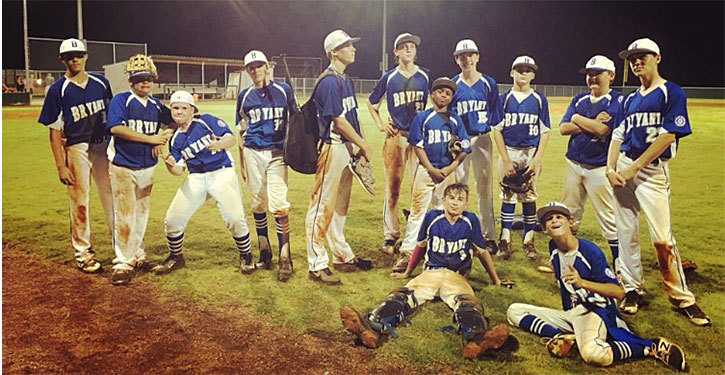 ARKADELPHIA — The Bryant Athletic Association All-Stars advanced to the championship round of the 2017 Junior Babe Ruth South Arkansas 13-year-old State Tournament by out-slugging the Clark County All-Stars, 17-7, in their second game of the day.

Earlier, they had dismissed the El Dorado All-Stars, 16-5.

Bryant will play for the tourney championship on Sunday at 2 p.m. against the survivor of the loser’s bracket which will be determined by games involving El Dorado, Sylvan Hills and Clark County on Saturday. With a win at 2 on Sunday, Bryant will claim the title. A winner-take-all final will be held 30 minutes after the 2 o’clock game if Bryant gets upset.

Regionals begin July 21 at Lincoln, Ala.

Bryant used seven hits to take advantage of 15 walks, two errors and three hit batsmen in the contest. Thompson had three of those hits. Burton, Pabon and Hatman each drove in two runs.

Bryant trailed 7-6 going into the fourth inning but scored four times to regain the lead then added seven in the fifth to make it a rout as the defense behind Pabon’s pitching over the last two innings nailed down the win. Morrow and Thompson preceded Pabon on the mound.

A run in the first put Bryant on top initially. Martin walked, advanced to second on a balk, to third on a groundout by Burton then scored on Pabon’s groundout.

Morrow retired Clark County in order in the bottom of the first.

J.T. Parker started the second inning with a walk. Cade Parker swatted a single to right to send him to third. After Cade Parker stole second, Greiner walked to load the bases for Thompson, who cracked single up the middle to make it 2-0.

Boyce was hit by a pitch to force in a run then Myles walked to get another in. Martin’s RBI walk made it 5-0. And when Burton hit into a force at second, Boyce scored to make it a six-run lead.

But Clark County broke through in the bottom of the third, scoring five times. And, after Bryant was unable to tack on in the top of the third despite walks to Hatman and Thompson, Clark County took the lead with two runs in the home third.

The lead didn’t last long, however. In the top of the fourth, Boyce, Myles and Martin walked. Boyce scored on an error and, after Burton was hit by a pitch, Pabon picked up an RBI when he grounded into a force at second. Pabon swiped second and Martin scored on a passed ball to make it 10-7.

Pabon struck out two in the bottom of the fourth as he limited Clark County to a two-out single. In turn, Bryant just kept on scoring.

Thompson started the fifth inning by legging out an infield hit. Chase Boardman drew a free pass. Thompson scored on a wild pitch then Boardman hustled home on a passed ball as Myles drew a walk.

Another passed ball put runners at second and third before Myles scored on yet another errant pitch. Martin scored on Burton’s grounder to second, making it 14-7.

Base hits for Pabon and Morrow along with a walk to J.T. Parker filled the sacks. With two down, an error allowed Pabon to score before Hatman drilled a two-run single to center to make it 17-7.