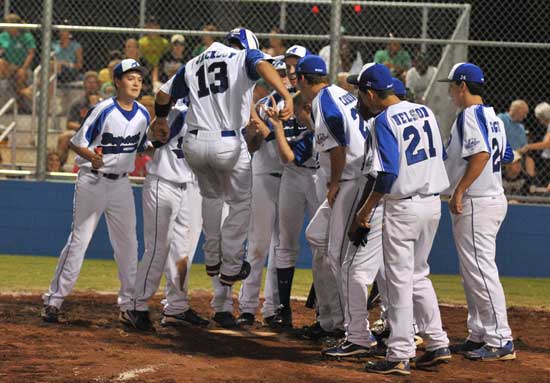 MONTICELLO — Going into their final pool play game in the American Division of the 2010 Babe Ruth 15-year-old World Series at Burlington Field, the Bryant All-Stars and the team from Greenville, N.C., both knew they were advancing to the single-elimination championship tournament. But there was still plenty on the line.

The winner would receive the No. 2 seed for bracket play.[more] 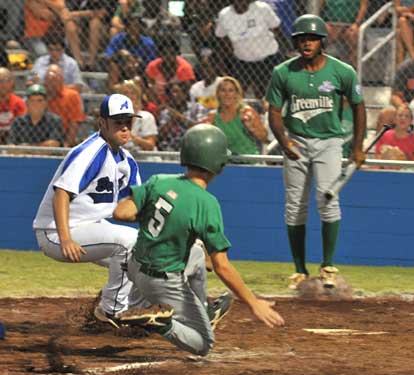 And they traded licks like the two heavyweights they are before Bryant, sparked by a pair of home runs by Blain Jackson, escaped with a wild 13-12 victory over the North Carolina team whose Dalton Britt smacked two homers as well.

Bryant will play the No. 3 seed from the National Division, Stamford, Conn., which had to win twice on Tuesday to advance, at 5:30 today to open the tournament. A win would set up a semifinal match against the National Division’s No. 1 seed, Saginaw Valley, Mich., at 5:30 on Thursday with a berth in Friday’s championship game on the line.

Greenville is set to take on the No. 2 seed from the National Division, Waite Park, Minn., at 8 p.m., with the winner advancing to play North Syracuse, N.Y., the only team in the Series to get through pool play unbeaten. 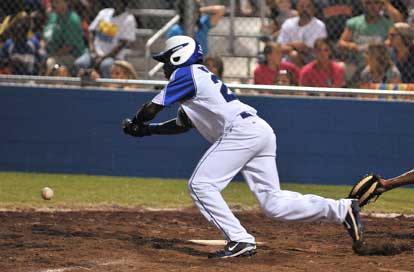 Bryant jumped on Greenville for eight runs in the first inning but the Carolina team rallied to within 9-7 by the end of the third inning. Bryant, however, would not relinquish the lead.

“This team showed some fire today,” Parker stated. “We played to win. And I got to get Tryce some work (on the mound) and Riley some work. They both did fine. (Greenville) just hit it where we weren’t. I thought Tryce had good velocity and everything but they’re a good hitting team. Riley did a real good job.”

Hall relieved in the bottom of the third when it was 9-7. There were two out but the potential tying run was at the plate. He got David Paylor to hit a fly to shallow center that Tyler Green came dashing in to grab, making a nice running catch to end the inning. 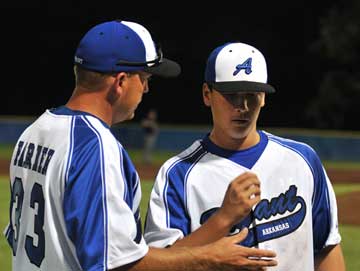 And, in a game in which there were only four half-innings where a team didn’t score, Hall turned in two. In the fourth, he walked a pair but, with one out, he picked off the man at second with Nelson, the Bryant shortstop sneaking in behind.

“That was huge,” Parker declared.

Hall struck out Greenville’s No. 3 hitter to end the inning. He had fanned Britt for the first out of the frame. It was the only plate appearance of the night that Britt didn’t have a base hit nor an RBI. He finished 4 for 5 with two doubles, the two dingers and six runs batted in.

Bryant was clinging to a 13-10 lead after five when Hall waded through the heart of the Greenville order for only the second 1-2-3 inning of the game. He set down the first two in the seventh then issued a walk on a borderline 3-2 pitch to Tyler Garrett bringing up Britt again. He ripped a 1-1 pitch over the fence in right to cut the lead to 13-12 and Parker brought on Nelson who picked up the save with a six-pitch strikeout of C.J. Ebron.

At first, it looked like Bryant might run away with it. An eight-run top of the first including five hits including Jackson’s first bomb and three Greenville errors. 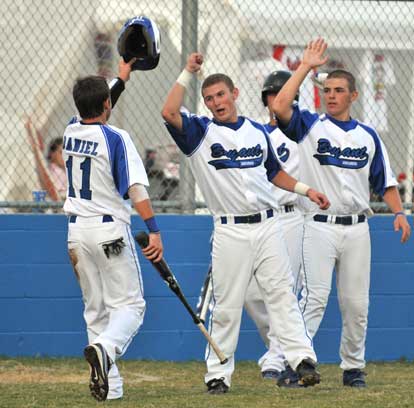 Daniel singled to start the game, Nelson walked then, with the runners going, Wilson banged a liner off the pitcher, Jehneil House, to load the bases.

Gogus smacked a single to left to drive in the first two runs and when the ball was misplayed in left, Bryant had runners at second and third. With one out, Richards came through with a sacrifice fly to center to make it 3-0.

Greenville appeared to be out of the inning at that point as House fanned Schalchlin on a ball in the dirt. Aaron Clark, the Greenville catcher, blocked the ball well but uncorked a wild throw to first. Gogus scored and Schalchlin wound up at second.

A wild pitch got him to third as Price walked. On the first pitch he saw from House, Jackson then drilled his first homer, a three-run jack, to right-center to make it 6-0.

After Britt relieved, Daniel singled, stole second drawing a wild throw that allowed him to take third. He scored when Nelson beat out an infield hit on a slower roller through the thick grass.

In the bottom of the inning, Britt greeted Schalchlin with a solo homer. But the right-hander retired the next three with little trouble.

Britt set down the Bryant Stars in order in the top of the second and Greenville started to rally in earnest in the home half. Kyle Cross singled and, with one out, Jarrett Ozimek doubled to right-center. A walk to Paylor loaded the bases for the nine-hole hitter, Garrett. He snuck a single through the left side to make it 8-2. 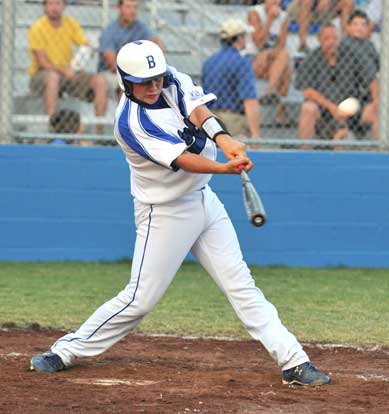 But that also brought up Britt again. He stroked a two-run double down the line in right.

Though Garrett was caught trying to come home on a ball in the dirt — Jackson pounced on it and flipped to Schalchlin covering for the second out — a wild pitch allowed Britt to score, making it 8-5.

Jackson’s second clout, with two out in the top of the third, added a run to the margin.

But Greenville kept coming. A two-run double by Ozimek had the lead whittled to two runs and forced the pitching change.

Bryant kept scoring too. Wilson beat out a bunt single to start the fourth. Gogus drew a walk and Green sacrificed them to second and third. Richards burned the center fielder with a drive to the base of the fence for a two-run double, making it 11-7.

After the pickoff helped Hall get through the bottom of the inning, Bryant manufactured a run. The speedy Daniel singled to left, took second on a wild pitch, third on a grounder to the right side by Nelson then scored on Wilson’s slow roller to third, on which Greenville needed a fine play by House to nip Wilson at first.

The 12-7 lead turned into a 12-10 edge in the fifth. With one out, Cross walked, Clark doubled and Ozimek delivered a sacrifice fly. Johnson Little, the third, Greenville pitcher, drew a walk and Garrett beat out an infield hit to drive in a run before Britt singled to knock in a run.

And when Ebron drew a walk, the potential tying and go-ahead runs were on base. But Hall got House to tap back to the mound as the tall right-hander preserved the lead for Bryant.

The Stars countered with a run that would prove to be the difference. Green beat out an infield hit to start the sixth. He took second on a wild pitch, third on Richards’ bouncer to the right side and, with two out, came home when Price’s grounder to short drew a wild throw to first.

After Greenville went down in order in the bottom of the sixth, Daniel and Nelson drew walks off Little to start the seventh. Greenville called on its ace Devon Lee and, after Wilson sacrificed the runners to second and third, the hard-throwing right-hander got out of the jam, setting up the dramatic finish.