Will Hathcote combined with Slade Renfrow and Cameron McDonald to pitch a two-hit shutout as the Bryant Black Sox 17-and-under American Legion team opened the 2018 season with a 12-0 romp in five innings over the Everett Infiniti Cardinals 17-and-under squad at Bryant High School Field on Tuesday night.

Noah Davis had two hits for the Sox who benefitted from seven walks, three hit batsmen and three errors with six hits. A nine-run second was the game-breaker. It included just two hits, an RBI triple by Blaine Sears and an infield hit for an RBI by Lawson Spear.

Hathcote recorded nine outs in his three innings of work, eight of them on strikeouts. He allowed a two-out walk to Chase Chilton and a lined single to right by Dalton Davis in the opening inning. After a wild pitch allowed them to reach second and third, he fanned Gabe King to end the threat.

The only other base-runner for the Cards against Hathcote was a one-out infield single by Matthew Rouse in the third.

Renfrow struck out the side around a walk to Jared Palmer and a hit batsman (Logan Bragg) in the fourth. In the fifth, Cameron McDonald hit Sean Small but retired the next three to end the game. A sparkling play in deep short by Zion Collins brought the run-rule contest to a conclusion.

In all, the Sox hurlers combined for 12 strikeouts.

Meanwhile, Bryant scored in each of its four at-bats. Noah Davis led off the bottom of the first with a sharp single up the middle. Spear sacrificed him to second and nearly beat out the bunt for a hit. Davis stole third and scored on Garrett Wilson’s single to left to make it 1-0.

Though Hathcote singled and Ryan Riggs was struck by a pitch, Everett starter Tristan Hammonds escaped further damage, robbing Collins of a hit by snagging a line drive up the middle to end the frame.

The big second inning began with Kannon Allison getting plunked by Hammonds’ first delivery. Sears followed with his triple over the head of the left-fielder.

Noah Davis walked then Spear’s grounder to second went through the wickets into right, plating Sears and sending Davis to left. Spear stole second and, after Wilson walked to load the bases, Hathcote hit a sharp grounder to third. Chilton fired home for a force.

Riggs then swatted a liner to left that would’ve been a sacrifice fly but was misplayed. So, not only did Spear score but Riggs reached safely as the bags remained full.

Connor Coleman was hit by a pitch to force in a run then Collins walked to make it 6-0. With two away, Sears drew a free pass to bring in Tyler Bates, the courtesy runner for Riggs.

The count went to 0-2 on Spear but he beat out an infield hit, driving in Collins. Wilson struck out but the third strike got away from Rouse, the Cards’ catcher, and Sears scored to make it 10-0.

Coleman and Collins each walked in the third. Coleman stole second and took third on a wild pitch then a passed ball allowed him to score.

In the fourth, Noah Davis beat out an infield hit and when Wilson hit one off the pitcher to second and was thrown out, Davis hustled all the way to third, beating the third baseman, Chilton, back to the bag. And when the return throw from first got away, he scored to set the final tally.

“They’re young,” said manager Tyler Brown of his two Sox Junior teams (15’s and 17’s, who are both made up primarily of 15-year-old players). “It’s going to be a year in which there’s a lot of learning, a lot of developing. But, for the first day, I was very impressed with what we had. I thought everybody stayed in the game. I thought everybody listened and learned from play after play, learned from their previous at-bats, to where I think this group has a chance to be pretty good when it’s all said and done. I think they have a real chance. They’re coachable, so that’s good.

“Pitching’s going to be the strong point of these teams all year,” he added. “Just about everybody on the team can throw. And they’re all good arms too. Previous years, you know, we’ve had to run kids out there that haven’t been throwing all year but these guys have been. Most of them have good stuff. Out of 18 players, probably 16 of them can throw. You can’t have enough pitching, especially in Legion.”

The Sox are set to return to action tonight at Bauxite. 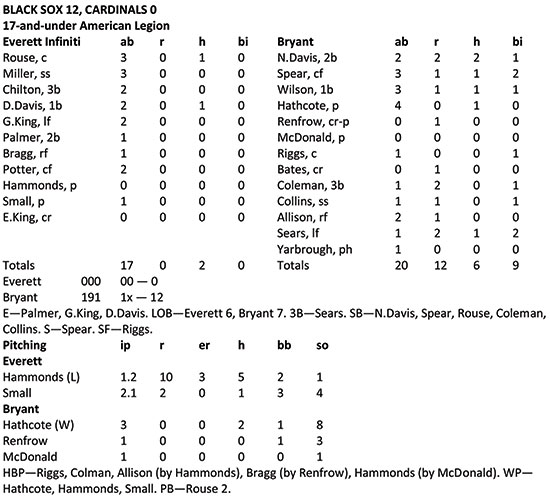