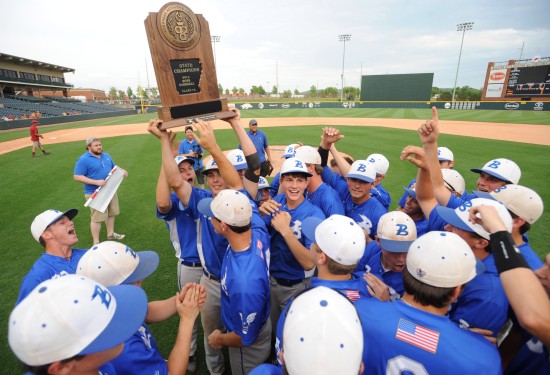 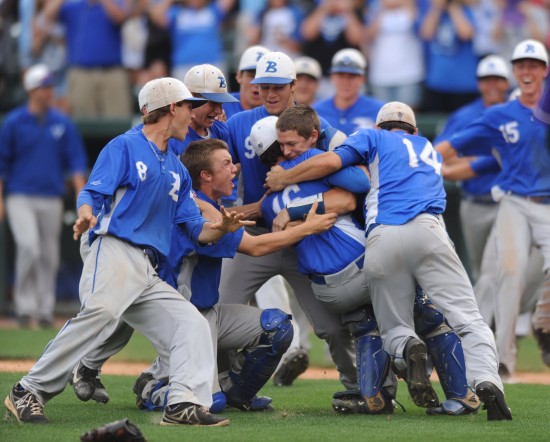 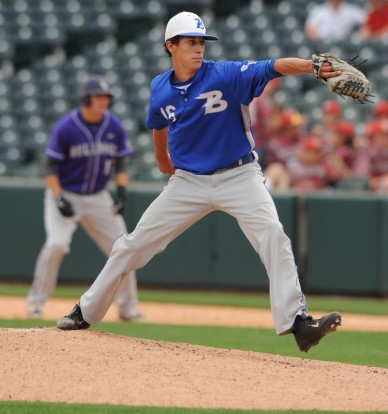 Blaine Knight was named the State tournament MVP after his second four-hit shutout of the tourney. (Photo courtesy of Andy Shupe/NWA Newspapers LLC)

FAYETTEVILLE — No high school baseball team works any harder than the Bryant Hornets. Early in the morning, late at night, they’re hard at it. And no one better let their grades slip.
The result is self discipline which leads to execution — at the plate, in the field and on the mound.
Oh, and State championships.
On Friday, the Hornets, appearing in their fourth State title game in five years, captured their third State crown with a stunningly lopsided win over the defending State champion Fayetteville Bulldogs, a team loaded with talent that was dubbed the odds-on favorite to repeat when the season began and did nothing to deter those predictions.
Until Friday.
Bryant scored in five of the six innings, hammering 12 hits and scoring 10 runs against a pair of highly-touted Fayetteville pitchers who had allowed just 11 earned runs between them all season. Senior Dalton Holt went 3 for 3, scored four times and blasted his first home run of the season, a two-run shot in the top of the sixth that set the final score. 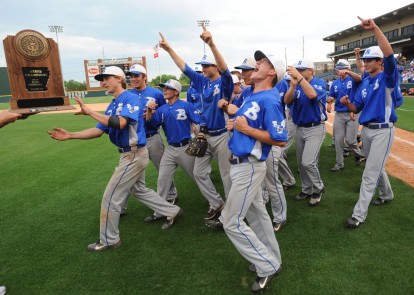 The 10-0 run-rule win was the Hornets’ third straight shutout of the tournament and second by the tourney’s Most Valuable Player, Blaine Knight, a junior who has (come to find out) verbally committed to return to Baum Stadium, the scene of Friday’s triumph, to pitch for the University of Arkansas after next season. Sophomore Zach Jackson fired the second of the three four-hit shutouts last Monday over Conway.
It’s the first time since 1975 that a team has gone through a State Tournament without being scored upon. That year, when baseball had one classification, Little Rock Mills blanked four opponents on the way to the title.
“I guess we’re doing it in even number years now, ’10, ’12, and ’14,” noted Hornets head coach Kirk Bock, who actually led Harrison to a State title in 2008 as well, before taking over the Bryant program in 2009. “If you would have told me that six years ago when I can in here, I would’ve taken it.
“Our kids prepared extremely hard all year,” he acknowledged. “Our goal is obviously to win a State championship but we want to win a National championship one day and I think we’re going to do it.” 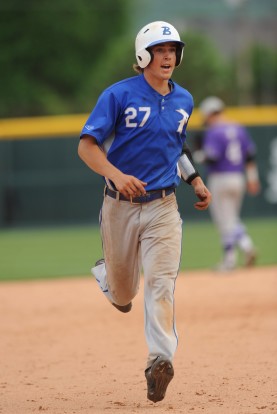 Dalton Holt circles the bases after his two-run homer in the top of the sixth gave his team a 10-0 lead. (Photo courtesy of Andy Shupe, NWA Newspapers LLC)

To go with the splendid pitching, the Hornets (33-2) committed just one error in their three wins. It came in the bottom of the first against Fayetteville (31-4) when a pickoff throw by Knight was off target allowing Fayetteville star Kyle Pate, who hit a lead-off single, to reach second.
Knight, indicating what was in store all day for the Bulldogs, retired the next three to force Pate to be stranded.
“Knight did a tremendous job,” said Bock. “He shut down a very good club. He’s had a couple of bad outings but, for the most part, he’s been like that all year. When he pitches, he’s extremely good. When he just throws, he’s mediocre. He’s learned how to pitch this year.”
The right-hander acknowledged that it helped that his team staked him to an early lead. The Hornets scored a run in the first and three in the second.
Trevor Ezell, who started at shortstop as a sophomore for the 2012 State champs, worked a walk against Fayetteville’s Andy Pagnozzi, who came into the game with a 10-0 record this season and an earned run average under a run (like Knight). Drew Tipton sacrificed then Chase Tucker singled in the run.
Bryant made a bid to get more when Trey Breeding singled Tucker to third but, on a safety squeeze, Fayetteville first baseman Walker Powell made a nice play on Jason Hastings’ bunt and threw to the plate in time to nab Tucker.
“They stopped us in the first inning,” Bock observed. “They made a great adjustment, made a great play and I thought that might come back and haunt us. But our kids, I think once we cut them and we smelled a little blood, they got on it. We played good defense and pitched extremely well all year. Offense comes and goes. Today it came and it worked out pretty good for us.”
The coach has always said that, in a championship setting, the team that makes the fewest mistakes, especially in the field, usually wins. Fayetteville broke down some in the second and the Hornets scored three times. They almost got more, in fact. 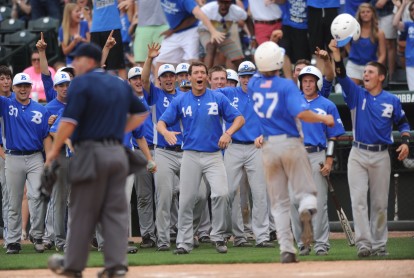 Dalton Holt (27) is greeted by his teammates after his homer. (Photo courtesy of Andy Shupe/NWA Newspapers LLC)

Pagnozzi walked Brandan Warner then plunked Holt with a pitch. Korey Thompson got a sacrifice bunt down that third sacker Ethan King fielded. But, after looking at second, he had to rush his throw to first and it was wide of the mark, sailing down the right-field line. Warner scored easily and Holt hustled all the way around from first, just beating the relay home with a nice hook slide.
Thompson, who wound up at third, scored to make it 4-0 when Ezell’s grounder to second was booted.
Pagnozzi got Tipton to fly to center but walked Tucker then gave up a two-out single to Hastings to load the bases. He escaped further damage, however, when Blake Patterson bounced out to first.
Fayetteville put together its best scoring opportunity in the bottom of the second. Knight issued his first walk to Drew Tyler. An out later, Blake Power singled and, with two down, Walker Powell slapped a base hit to right to fill the sacks with Pate, the Dogs’ top hitter coming up.
But Knight got two strikes in on him then induced a routine grounder to Thompson at second to get out of the jam. 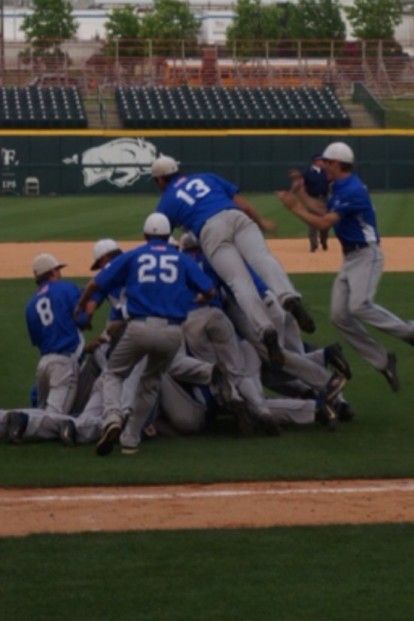 The Hornets celebrate their 2014 Class 7A State championship with the traditional dogpile including the “Flying Panda” Zach Jackson (13). (Photo courtesy of Cindy Jackson)

“That set the tone for the game,” Knight said of the escape. “Our scoring first really helped me out, made me a little more confident up there. It helped me relax a little bit. It helped me settle in and just let me fill the zone up where I don’t have to work as hard. I had a defense behind me that’s number one in the country. I wouldn’t trade them for the world. If it wasn’t for them, (being the MVP) wouldn’t have happened. They had my back the whole game.”
Knight retired seven in a row, counting Pate in the second. He walked King to start the fifth but Thompson made a spectacular leaping catch on a lined shot off Powell’s bat, firing to first to double up King. Pate and Alan Dunn drew walks but, after a visit with Breeding his catcher, Knight got Greg Koch to fly to Hastings in right to retire the side.
By that time, the Hornets had built the lead to 7-0. In the third, one-out singles by Holt and Thompson forced a pitching change as Pate replaced Pagnozzi with the top of Bryant’s order coming up. Though the lefty fanned Ezell, Tipton came through with a base hit to right on an 0-2 pitch to drive in the run, making it 5-0.
Pate worked a 1-2-3 fourth then fanned the first batter in the fifth before Holt cracked a single to left. Thompson placed his second sacrifice to bring up Ezell who cranked a liner down the right-field line for an RBI double. Tipton, after fouling off a pair of two-strike pitches, laced one to right as well for another run-scoring two-bagger to make it 7-0.
In the top of the sixth, Hastings singled with one out, taking second when the ball was misplayed in right — the third Fayetteville miscue. Patterson sliced a double down the left-field line to drive in Hastings and, with two down, Holt unloaded with a long homer to left.
“He came through big,” Bock stated. “That’s a great game for him as a senior. He’s got schools looking at him and maybe somebody will pull the trigger on him now.”
“I think I just saw the ball well,” said Holt, who came into the game hitting .227 for the season but .360 over his last eight games. “We’ve seen faster pitching in the State tournament. We like to jump on fastballs and get on them early. I think it was 2-0 so I knew a fastball was coming for sure. If it was in, I knew I was about to hit it hard somewhere. I barreled it up and it got out of here.
“I’ve just been working on my timing and rhythm and today I was just timed up with them,” he explained.
“When those guys are hitting, when they can get on base, we can score some runs,” Bock noted, referring to Holt and Thompson, the eight and nine hitters in the Bryant line-up. “And they got on base today.
Asked how they solved the Bulldogs’ aces, the Bryant coach said, “It’s just all about getting in rhythm with them. Once we got in rhythm then we were fine. It took us a little bit longer to get in rhythm with Pate but, once we got it, we got it. The kids executed real well.”
Three outs away from the title, Knight revved it up. He struck out clean-up hitter Cody Davenport, surrendered a single to Tyler then struck out Pagnozzi. The game ended on Connor Shaw’s fly to Tucker in center.
Asked about being the underdog coming in, Bock related, “I didn’t feel that way. I knew we have a good squad and if we prepare to play our game then play our game, we’re going to be successful.”
Regarding Bryant’s 3-1 record in State championship games over the last five seasons, the coach said, “Make it like any other game. Don’t make it any bigger than anything else. In the big scheme of things, it’s not. The crowd, the setting is bigger. The crowd’s going to make it bigger but when you get right down to it, it’s just another baseball game. So just play.”
HORNETS 10, BULLDOGS 0
Bryant ab r h rbi Fayetteville ab r h bi
Ezell, ss 3 2 1 1 Pate, rf-p-cf 2 0 1 0
Tipton, lf 3 0 2 2 Dunn, 2b 2 0 0 0
Tucker, cf 3 0 1 0 Koch, c 3 0 0 0
Breeding, c 4 0 1 0 Davenport, cf-p 3 0 0 0
Hastings, rf 4 1 2 0 Tyler, ss 2 0 1 0
Patterson, dh 4 1 1 1 Pagnozzi, p-3b 3 0 0 0
Warner, 3b 3 1 0 0 Power, lf- 2 0 1 0
Holt, 1b 3 4 3 2 Shaw, rf 1 0 0 0
Thompson, 2b 2 1 1 0 King, 3b 1 0 0 0
Knight, p 0 0 0 0 Powell, 1b 2 0 1 0
Totals 29 10 12 7 Totals 21 0 4 0
BRYANT 131 023—10
Fayetteville 000 000—0
E—Knight, King, Dunn, Shaw. DP—Bryant 1. LOB—Bryant 8, Fayetteville 7. 2B—Ezell, Patterson, Tipton. HR—Holt. SB—Ezell. S—Thompson 2, Tipton.
Pitching ip r er h bb so
Bryant
Knight (W, 11-0) 6 0 0 4 4 5
Fayetteville
Pagnozzi (L, 10-1) 2.1 5 2 5 3 2
Pate 3.1 5 5 7 0 7
Davenport 0.1 0 0 0 0 0
WP—Pagnozzi. PB—Koch.