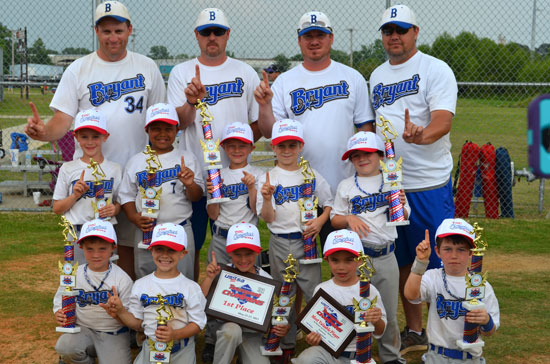 BENTON — A Bryant 6U team edged a team called the Vipers, 11-10, to capture the championship[more] of the third leg of the Wally Hall-Everett Buick GMC Triple Crown on Sunday, going undefeated in four games.

The run began with a 21-3 win over Section 8 and proceeded with a 16-1 win over Lights Out in a game that featured a triple play. A 17-9 win over Sylvan Hills put the Bryant team in the final.

Brown was named the tournament MVP.

McCoy opened the home sixth with a single and Thomason followed with another. Both moved up on Brown’s groundout, setting the stage for the game-winning hit by Schroeder.
Both teams opened the game with three-run outbursts. Bryant’s uprising in the bottom of the first began with back-to-back triples from Heidelberg and Speer. McCoy and Thomason followed up with consecutive doubles.

The Vipers took a 4-3 with a run in the top of the second but it didn’t last long. In the home half, Chism singled, moved up on groundouts by Jackson and Allen then scored the tying run on a double by Heidelberg. Speer snapped the tie with a double.

A run in the top of the third cut Bryant’s lead to 6-5 and it stayed that way until the bottom of the fourth. Jackson ignited a three-run inning with a lead-off single. McCoy followed with a base hit then Heidelberg grounded into a force at second. With runners at the corners, Chism cracked an RBI double and when McCoy and Thomason each singled it was 9-5.

After the Vipers’ five-run rally to take the lead in the top of the fifth, Bryant tied it when Jackson singled with one out, was forced at second on Allen’s grounder to short then Heidelberg singled in the run.

A lead-off double in the top of the sixth put the Vipers in position to regain the lead. The runner moved up on a groundout then tried to second on a bouncer to short. But Brown made the play and threw out the batter at first. McCoy, the Bryant first baseman, wheeled and threw to Davis at the plate for an inning-ending doubleplay that set up the game-winning bottom of the inning.

Trailing 8-5, Bryant erupted for the maximum seven runs in the bottom of the third to gain control of the semifinal game with Sylvan Hills. Eleven batters came to the plate and only two outs were recorded.

And when Sylvan Hills could only muster one run in the top of the fourth and Bryant added five in the bottom of the inning, the game was out of reach.

Bryant took a 3-0 lead in the bottom of the first. Heidelberg tripled then Speer, McCoy, Schroeder and Davis had hits.

Sylvan Hills tied it in the top of the second but Bryant answered with two more. Jackson opened with a single but was forced at second on a grounder by Allen. With two down, Speer singled and McCoy doubled to get things going. A hit by Thomason got the second run home, making it 5-3.

A five-run third had Sylvan Hills on top but it didn’t last long as Bryant put together the seven-run answer. Schroeder singled to start the inning but was forced at second on a grounder to short by Davis. Chism belted a double and, with two outs, Allen came through with the hit that opened the floodgates. Hits by Heidelberg, Speer, McCoy, Thomason, Brown and Schroeder completed the surge.

The clinching fifth inning began with a single by Davis. Chism laced a triple and, after singles by Jackson and Davis, Speer and McCoy closed it out with doubles.

Bryant maxed out the second inning to take control of this game, turning a 3-1 lead into a 10-1 advantage.
In the bottom of the second, Lights Out had runners at the corners when Speer caught a pop, tagged the runner wandering off third and fired to McCoy at first to complete the triple play.

Bryant jumped to a 3-0 lead in the top of the first. Heidelberg singled and, after he was forced at second on Speer’s grounder. McCoy then came through with a double and, with two down, hits from Brown, Schroeder and Davis completed the uprising.

Lights Out managed its lone run in the bottom of the inning then came the Bryant explosion. Singles from Jackson, Allen and Heidelberg loaded the bases for Speer, who cleared them with a triple. Hits from McCoy, Thomason, Brown and Davis followed.

In the third, Chism singled, Jackson doubled and hits by Heidelberg and McCoy brought them around to extend the margin to 12-1.

To finish off the win, Bryant got four in the fourth without making an out. Brown and Schroeder singled in front of a triple by Davis. Hits from Chism and Jackson produced the last two runs.

Maximum innings in each of three frames made short work of Section 8, which only scored its three runs after Bryant had produced a 21-0 lead.

The first inning uprising featured home runs by Speer and McCoy and doubles from Brown and Schroeder.

In the second, McCoy had the big blow with a two-run triple. Later, Brown doubled and Chism blasted a home run.

Doubles by Heidelberg and Brown and a triple from Davis highlighted the third inning.