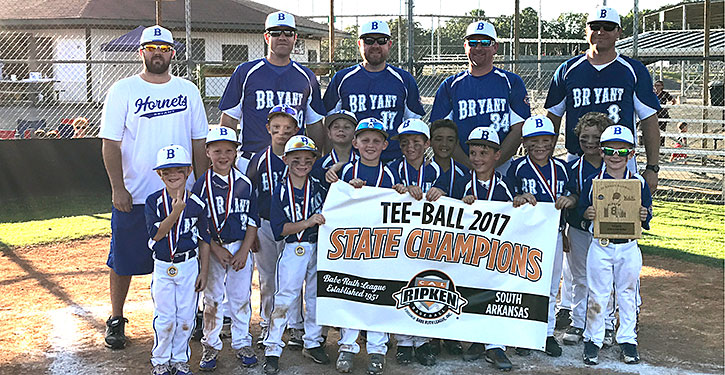 SHERWOOD — The Bryant 6-year-old All-Stars scored the maximum limit of six runs in each of the four innings on the way to a 24-11 win over the rival Benton All-Stars to capture the 2017 6U T-Ball State championship on Tuesday night.

Unbeaten coming into the tournament, Bryant remained so as it swept its way to the title.

They advance as a top seed to the 6U Regional in Arkadelphia starting July 7.

Benton matched Bryant’s six runs in the first inning but when the Bryant Stars scored six more in the second, Benton only mustered four. Bryant continued to add to the lead as Benton began to struggle to score, managing only one in the third and two in the fourth.

In the first, Verdell, Robertson, Brothers, Andrews, Lloyd and Jackson crossed the plate.

It wasn’t until the third inning that Benton managed to record an out on Bryant, which still got its six as Martin, Brothers, Andrews, Jackson, Sory and Hogland crossed the plate.

The romp was completed in the fourth as Atkins, Verdell, Robertson, Martin, Brothers and Andrews scored.