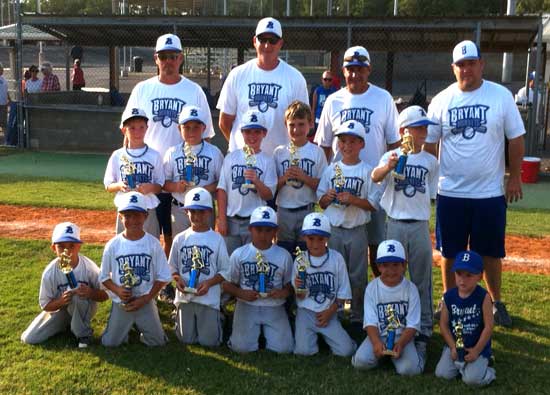 The Stars opened the tournament with a 7-5 loss to Sylvan Hills but came back to beat Cabot twice, 15-7 and 9-1 to get another shot at Sylvan Hills in the championship game, prevailing 14-10.

After leading early in the championship game, 8-2, the Bryant Stars found themselves trailing 9-8 going into the last inning. But they erupted for five runs then held the Bears to 1 run in the bottom of the sixth to nail down the win.

Bryant took the lead initially in the opening inning. With one out, Dreher singled. Thompson followed up with a base hit but when Dreher tried to advance to third on a ball in the dirt, he was thrown out by the Bears catcher. But Thompson moved up to second and, moments later, Barrett singled to left to drive him home.

Barrett stole second and reached third on a base hit by Parker but both were stranded.

After Bryant held Sylvan Hills scoreless in the bottom of the inning, the Stars added a run to the lead in the top of the second. McDonald singled, stole second and scored on a double by Highfill.

Sylvan Hills got on the board with a run in the bottom of the inning but Bryant countered with a four-run uprising in the third. Hatman and Martin each singled to get the inning started. Hatman was out at third on a grounder by Dreher but Thompson singled to load the bases for Barrett who came through with a two-run single. Parker drove in a run and so did McDonald, making it 6-1.

The Bears plated another run in the bottom of the inning but Bryant built its largest lead in the top of the fourth. Morrow tripled and scored on a single by Seelinger. After Hatman grounded out to advance Seelinger, Martin singled him in.

That didn’t last for long, however. In the top of the sixth, McDonald revved up the offense again with a lead-off triple. White singled him in then Highfill and Seelinger socked doubles. With two out, Martin mashed a two-bagger as well and Dreher drilled a triple. Dreher reached base then Barrett’s single made it a six-run frame.

Sylvan Hills managed a run on two hits in the bottom of the inning but Bryant closed it out for the victory.

In the second win over Cabot, the Bryant Stars’ defense kept Cabot shutout until the fourth inning. Bryant added two runs in the bottom of the inning to put the game out of reach.

In the opening inning, Dreher and Parker singled then raced home on Barrett’s double to make it 2-0.

In the second, Highfill and Morrow singled with one out. They stole third and second respectively, then home and third to make it 3-0. A single by Hatman brought Morrow home.

Thompson led off the third with a base hit. Barrett singled then Thompson was thrown out at third on a grounder to short by Parker. With two down, McDonald singled in a run. Infield hits by White, Highfill and Morrow produced a 7-0 lead.

After Cabot got its run in the top of the fourth, Hatman started the bottom of the fourth with another hit. He stole second but was thrown out at third. With two down, Dreher and Thompson singled. They worked a double steal and both scored on a single by Barrett.

In the top of the fifth, Bryant turned a doubleplay on a liner to third to end the game.

Leading just 9-7 going into the fourth inning, Bryant maxed out with six runs in the bottom of the fourth then held Cabot in the fifth for the victory.

Bryant’s Stars opened up a 3-0 lead in the bottom of the first. Martin led off with a double and a stolen base. Dreher singled him home. Thompson singled then Dreher was out at third on a grounder by Barrett. But Parker doubled in Thompson. Barrett was thrown out at the plate but Greiner kept the inning going with a base hit. Singles by McDonald and White completed the inning.

Cabot forged a 4-3 lead in the top of the second but Bryant tied it in the home half. Hatman singled with one out but was forced at second on a grounder to short by Seelinger. Martin followed with a double that drove Seelinger home with the tying run.

Cabot regained the upper hand with three more runs in the top of the third only to have Bryant push five across to regain the lead in the bottom of the inning.

Thompson and Barrett set the table with base hits. Parker doubled in a run and Greiner drove in Barrett when he hit a grounder that resulted in Parker being retired at third. McDonald singled then White bounced into a force a third for the second out. Highfill kept the inning alive with an RBI single. Morrow doubled in a run and a base hit by Hatman capped the inning.

Cabot was unable to cut into the 9-7 lead in the top of the fourth and Bryant went back to work at the plate. Consecutive doubles by Martin, Dreher and Thompson started the inning. Barrett singled in a run then Parker and McDonald doubled. Highfill’s two-out single made it 15-7.

Cabot managed a one-out single in the fifth but the runner was thrown out trying to steal and a strikeout ended the game.

The Bears took a 4-0 lead in the first and Bryant rallied to eventually take a 5-4 lead. But when Sylvan Hills scored three in the fifth, the Stars were unable to rally as the Bears held on.

Bryant answered that first four-run salvo with two in the bottom of the first. Martin singled, stole second and scored on a triple by Thompson. With two down, Parker singled in Thompson to make it 4-2.

With Sylvan Hills held scoreless over the next three innings, the Stars began to whittle on the lead. In the second, McDonald singled and stole his way to third before scoring on a groundout.

In the third, Hatman singled and swiped second. With two down, Dreher came through with an RBI double to tie the game.

Bryant took the lead in the fourth. With one out Greiner reached second on a single and an error and scored on a double by McDonald. The Stars made a bid to get more when Highfill reached second on an error that got McDonald to third but both were stranded.

After the Bears regained the lead with their three-run fifth, Bryant was retired 1-2-3 in the bottom of the fifth. In the sixth, Dreher got a hit to left but was thrown out trying to stretch the single into a double. Thompson followed with a base hit and stole second but was stranded as the game concluded.