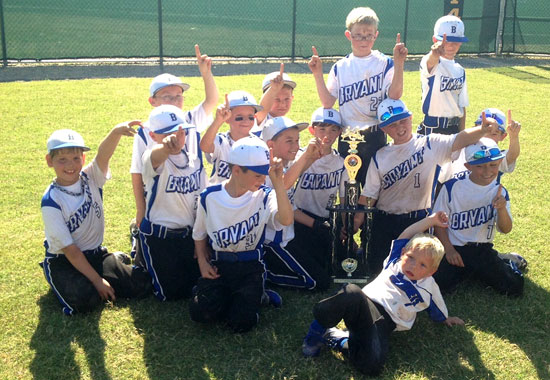 NORTH LITTLE ROCK — Matt Griffe slugged four home runs in five games as a Bryant 8-and-under[more] baseball team made an unbeaten run to the championship of the Elite Gold Ring Classic at Burns Park over the weekend.

The team defeated Beebe 12-3 and Benton 8-6 on Saturday then ousted a Monticello 7-year-old team, 15-0. In a rematch in the semifinals, Bryant eased past Beebe, 12-1, then shut out their rivals from Benton 7-0 to capture the title.

Griffe smacked two of his homers, going 3 for 3 with three runs batted in to spark Bryant to the final win. Small, Taylor, Stroud, Drake Brown and Fischer each added two hits.

Bryant scored in four of the five innings. In the first Lucas doubled, advanced to third on a groundout by Dunn and scored on a single by Griffe. Base hits by Newell and Taylor loaded the bases but Benton escaped further damage.

In the third, Griffe launched his first homer over the fence in left. An inning later, Stroud and Drake Brown singled, Owen sacrificed them to second and third and Fischer beat out an infield hit as the runners held. Despite loading the bases, however, Bryant was unable to add to the lead at that point.

But, in the fifth, Small singled and raced to third on an errant throw. Lucas got him home with a sacrifice fly and, with one out, Griffe blasted his second round-tripper to end the game.

Bryant broke open a scoreless game with three runs in the second then scored in every subsequent inning. Griffe capped off the barrage with a two-run blast in the top of the fifth.

The second-inning uprising was sparked by Stroud’s single to center with one out. Bickerstaff’s hit chased him home then Drake Brown singled him to third. An error allowed Brown to take second then Owen got Bickerstaff home with a groundout. Lucas doubled in the third run of the frame.

Two more scored in the third when Fischer singled, took second on an error, third on a groundout by Skelley and scored on a tap back to the mound from Small. Dunn then doubled and scored on a single by Newell to make it 5-0.

Beebe managed its lone run in the bottom of the third but Bryant answered with four more in the fourth. Singles by Taylor, Bickerstaff and Drake Brown produced two runs. Brown advanced on an error and scored when Owen beat out an infield hit. He swiped second and raced home on a base hit by Lucas as the lead ballooned to 9-1.

In the fifth, Skelley singled and stole second. With one out, Dunn beat out an infield hit. Newell drove home Skelley with a sacrifice fly moments before Griffe unloaded on an 0-1 delivery.

Bryant scored the maximum of six runs in each of the first two innings then put the game out of reach with three in the third. Small, Lucas, Dunn, Taylor, Bickerstaff and Stroud scored in the first. In the second, Owen, Fischer, Dawson Brown, Skelley, Lucas and Dunn accounted for the runs. Newell, Taylor and Bickerstaff scored in the third.

A five-run second gave Bryant the upper hand. With an extra run in the third and two in the fourth, they were able to hold off a Benton rally. Trailing 8-0, Benton cut the margin in half in the bottom of the fourth then put together a final rally in the bottom of the sixth, scoring twice before the game ended with the potential tying run at the plate.

Taylor, Bickerstaff, Owen, Lucas and Dawson Brown scored in the second. The third-inning run was scored by Newell. In the fourth, Bickerstaff and Drake Brown crossed the plate.

Griffe slugged his first home run of the tournament to cap off the scoring as part of a three-run fifth. Bryant took the lead with three in the second with Stroud, Bickerstaff and Drake Brown scoring. In the top of the third, Fischer and Dunn crossed the plate to make it 5-0 before Beebe pushed home a run in the bottom of the inning.

In the fourth, Taylor, Bickerstaff, Drake Brown and Owen scored as the lead blew out to 9-1. Along with Griffe, Skelley and Dunn scored in the top of the fifth.

Beebe tried to rally in the bottom of the inning but could only manage a pair of tallies before Bryant closed out the win.