ZACHARY, La. — The Bryant 9-year-old All-Stars finished pool play in the 2010 Cal Ripken Southwest Regional on Saturday, July 23, with a 4-0 mark. They will be the No. 1 seed entering the single-elimination bracket that begins Sunday when they take on the host team from Zachary at 7 p.m. 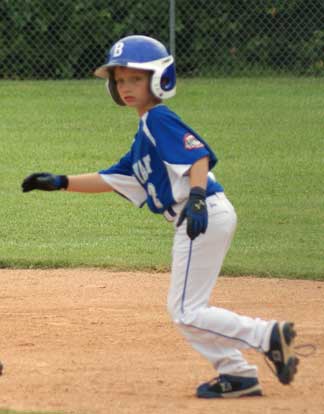 Bryant broke out with a quick run in the first. Catton led off with a walk then moved to third on a wild pitch and a passed ball. With two out and Dupree batting, Catton scampered home on another wild pitch. Bryant put two more runners in scoring position when Dupree walked and Grant was hit by a pitch and they moved up on a wild pitch but Greiner was caught looking at strike three to end the inning.

Chambers took the hill for Bryant and cruised though the first. After retiring the first batter on a grounder to short, he allowed a flare to left that fell in front of Cowell for a hit but then liner to Greiner at second and a swinging strikeout sent the game to the second with Bryant up 1-0.

The All-Stars took control of the game in the second. Cowell was struck on the bill of his helmet by a pitch that deflected and bloodied his nose. He left the game and was replaced on first base by Mullings. Lessenberry’s sacrifice bunt moved the runners into scoring position and then Catton walked to load the bases. 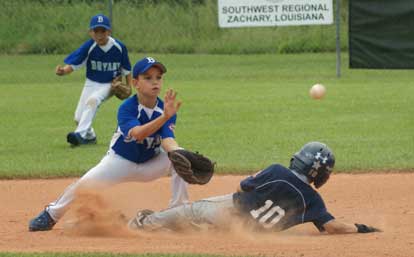 After a pitching change, Chambers walked, which brought McEntire in from third. The fist pitch to McFarland drilled him in the back so Mullings came home. With a count of 1-2, Dupree drilled a grounder just inside the third base bag for a two-run double. Donaldsonville’s third baseman then mishandled Grant’s grounder for an error as McFarland scored. Greiner laid down a bunt to the pitcher who forced Dupree to retreat to third, but Grant was running from second. Grant retreated toward second, drawing a throw and Dupree broke for the plate only to be thrown out. McEntire was at the plate for the second time in the inning when a wild pitch scored Grant with the sixth run which ended the inning. 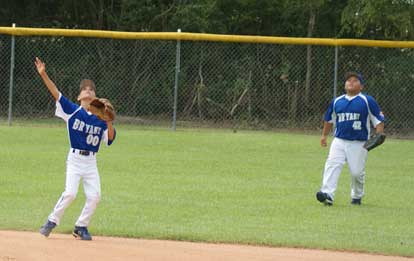 In the bottom of the second, Chambers faced just four batters, retiring the side around a one-out walk.

Bryant failed to score in the third despite a two-out single to center by Lessenberry.

Grant came in to pitch the third for Bryant and struck out the side on just 11 pitches to send the game to the fourth with Bryant ahead 7-0.

For the second consecutive inning, Bryant could not push across a run. Chambers led off with a four-pitch walk. McFarland scorched a line drive but it was right at the third baseman for an out. Holt hit for Dupree and reached on an error that allowed Chambers to make it to third. With runners at the corners, Grant fouled out and Greiner struck out to end the threat. 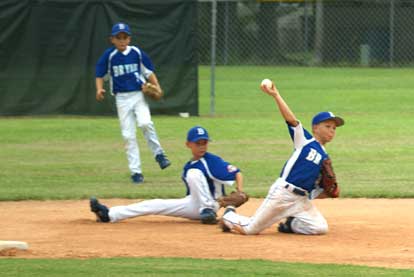 In the fourth, Grant got the first out on a grounder to short and then the second one with a fly ball to Nguyen in right. An error by Taylor at second had a runner at first but Grant got a comebacker to the mound to end the inning.

Bryant increased the lead with a couple runs in the fifth. Walks to Nguyen and Mullings resulted in a pitching change. A pair of wild pitches produced a run before Lessenberry popped out to first. Taylor, however, collected an RBI with a grounder to the pitcher as Mullings slid under the first baseman’s return throw to the plate. Chamber’s moved into scoring position on a wild pitch but was left there when McFarland popped to first.

McFarland took the hill in the fifth and closed out the game as he struck out the side. 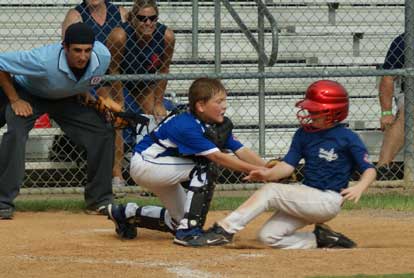 Bryant opened the game with a six-run explosion. Catton started it with a walk. Chambers lined the second pitch he saw over the center fielder’s head and circled the bases for an inside-the-park home run.

McFarland walked on four pitches and went to second on a passed ball before Dupree popped to first. Grant walked, but not before a couple wild pitches brought McFarland around to score. A wild pitch put Grant on second and he scored when Greiner tripled on a liner down the right field line.

Cowell singled on a fly to left to score Greiner, moved to second on a wild pitch and then took third on Lessenberry’s groundout. Taylor walked and stole second before Catton singled on a soft pop to the right side of the infield, which scored Cowell with the sixth run.

Dupree was the starting pitcher for Bryant and went the distance. In the first, he retired the first two before giving up an infield single that was fielded near the second base bag by Chambers. A liner to Greiner at second ended the inning.

In the second, after Chambers grounded to short, McFarland walked. He moved to second on a passed ball and then to third on Dupree’s ground out to first. The first pitch to Grant was high, glancing off the catcher’s mitt and striking the umpire in the mask, allowing McFarland to score as the ball rolled up the third base line. Grant then singled to center but was left on base when Greiner fouled out to the third baseman.

Dupree allowed a one-out single then struck out the next two to move the game to the third with Bryant up 7-0.

Bryant again scored the maximum six runs in the top of the third. Cowell led off with a single on a fly to right. Nguyen batted for Lessenberry and walked. Taylor looped a single into right to load the bases and, with one out, Holt, batting for Chambers, was hit by a pitch to bring in Cowell from third base. McEntire lifted a pop foul that the Madisonville catcher dropped. Given a second chance, he floated one to the second baseman who drifted back only to have it go off his glove. Nguyen scored and the other runners moved up. A wild pitch scored Taylor then Dupree walked to reload the bases.

Madisonville changed pitchers but it did little good as the new hurler threw two wild pitches that scored Holt and McEntire as he walked Grant. Mullings was plunked by a pitch to load the bases yet again and then Cowell walked to bring in Dupree with the sixth run. 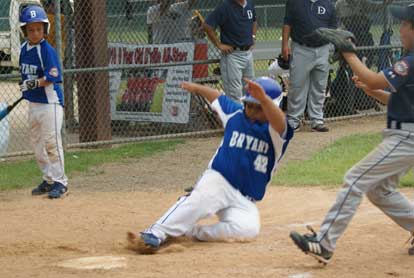 With a 13-0 lead, Bryant got a little sloppy in the bottom of the third and allowed two unearned runs.

Another six-run outburst in the top of the fourth gave Bryant a 19-2 run-rule victory. Nguyen led things off with a hard single to center that bounced off the shoulder of the left fielder, allowing him to slide safely into second. Taylor grounded a single into right that moved Nguyen to third. With Catton batting, Taylor stole second with Nguyen crossing the plate on the throw to second.

A throwing error by the shortstop let Catton reach first and moved Taylor to third base. Catton moving up to second on a passed ball and, with two out, a wild pitch scored Taylor and put Catton on third. He came home when Dupree reached on an error.

The first two pitches to Grant were wild and advanced Dupree all the way to third. He scored when Grant’s fly ball to center was dropped. Mullings laced a ground ball single back up the middle to score Grant from second. Cowell then capped the inning with his third hit of the game, a line drive into the right center gap for a triple.