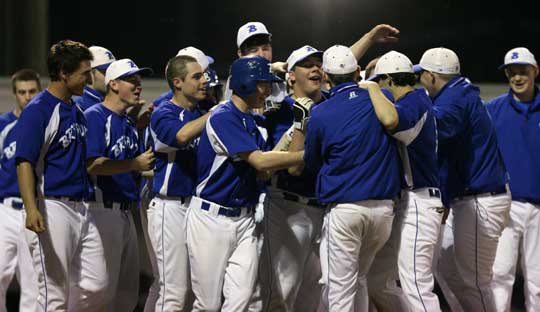 The Bryant Hornets got a pretty good idea they weren’t playing the same Pine Bluff Zebras team they’d faced in their season-opening benefit game right off the bat.

In fact, it was right off the bat of lead-off man Daryl Broody who launched a 2-2 delivery from Bryant starter Blake Davidson over the fence in dead center. Granted the wind was blowing out — a rare thing at Bryant High School field — but with one swing the Zebras had matched their total from the earlier meeting.

But the Hornets got the bats going too, hammering out 15 hits and winning in the bottom of the sixth by run-rule when Brady Butler sent a screaming liner down the line in left for a two-run blast, making it 13-2.[more] 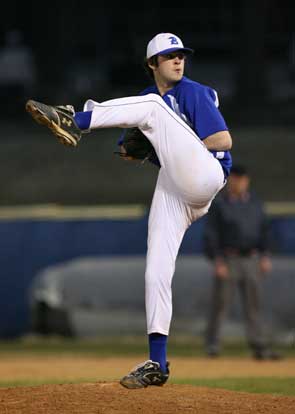 Dylan Cross pitched 3 1/3 innings of no-hit relief to pick up the win. He walked one and struck out six.

Chris Joiner, Garrett Bock and Jordan Taylor each had three hits for the Hornets. Taylor and Butler drove in four apiece. The Hornets also got down three sacrifice bunts and delivered a run with a sacrifice fly.

“We swung the bats,” acknowledged Hornets coach Kirk Bock, “but they did too.”

Along with the home run in the first, the Zebras’ Tory Deshazier walked but he was thrown out stealing by Bryant catcher B.J. Ellis. And it was a good thing because Steven Todle singled and Deion Smith split the gap in right-center for a double.

Davidson got out of the inning with no further damage, though, by getting Lawrence Baker to bounce back to the mound.

“Blake was just kind of leaving some stuff up,” noted Bock. “And they hit it hard.”

In the bottom of the inning, the Hornets smacked it around. Joiner singled to left and Garrett Bock slapped a single to right. With one out, Brennan Bullock coaxed a walk to load the bases for Taylor who drilled the first of his three doubles, driving in two to give Bryant the lead.

In the top of the second, LaDarius Washington hit a gapper for two bases and scored on a single by Darius Harper who took second when the ball was bobbled in the outfield. Nick Anderson came up next and tried to bunt but he shot the ball right back to Davidson who snagged the pop and fired to second to double off Harper.

Broady, however, drew a walk and Jalan Dabner slapped a single to right. Broady made the turn at second and headed to third but Bryant’s right fielder Caleb Garrett charged the ball and threw him out to end the inning.

Again, the Hornets responded in the home half. With two down, Joiner singled and Bock was hit by a pitch. A balk moved the runners to second and third then both scored on a double by Hunter Mayall. Bullock’s single up the middle brought Mayall home and made it 6-2. 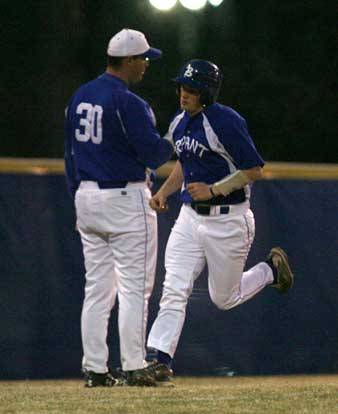 Davidson struck out Deshazier to open the top of the third but Todle and Smith singled. With runners at the corners, Cross came on in relief. On his first pitch, Baker hit a grounder to Taylor at short who flipped to Joiner for a force. Joiner’s relay to Butler at first was in time, ending the inning.

“I was very, very pleased with Dylan coming in,” Bock said. “I was leery. I know he can throw it. I just didn’t know if he was going to locate it because he’s kind of off and on. But he did a good job. He’s got the best breaking ball we have. It’s 12-6 straight down. When he locates it, he’s great. When he doesn’t, he’s like me.”

Cross allowed just one base-runner. Harper walked with one down in the top of the fourth. He advanced on a wild pitch then was granted third on a balk call that Coach Bock disputed to no avail.

But Cross got Anderson to line to Garrett in right then struck out Broady to retire the side. That started a roll in which he retired eight in a row, six on strikes.

The Hornets put themselves in position for the run-rule win with a five-run fourth. Again Joiner was the igniter, this time with a drive to the fence in right-center that he legged into a triple. Garrett Bock singled him in to make it 7-2.

Mayall lined a single to left and Bullock beat out an infield hit to load the bags for Taylor who cracked his second double over the center-fielder’s head. Bock and Mayall scored.

Butler then got down a safety squeeze bunt to drive in Bullock before Lucas Castleberry stroked an RBI single to left to make it 11-2.

Deshazier, who went the distance for the Zebras, surrendered a double to Bock with one out in the fifth but pitched around it to keep his team alive.

In the sixth, however, Taylor fought off a pair of 3-2 pitches before driving his third two-bagger to right-center. Likewise, Butler worked the count to 3-2 and, after fouling off a pitch, smoked the game-ending homer.

Now 5-0, the Hornets have now defeated half the teams in the 6A-South Conference. They’ll try to make it five of them when they travel to Benton to take on the rival Panthers on Thursday, March 11. On Friday, they host Monticello, then open 7A-Central Conference play at Little Rock Central on Tuesday, March 16.

No one out when game-ending run.