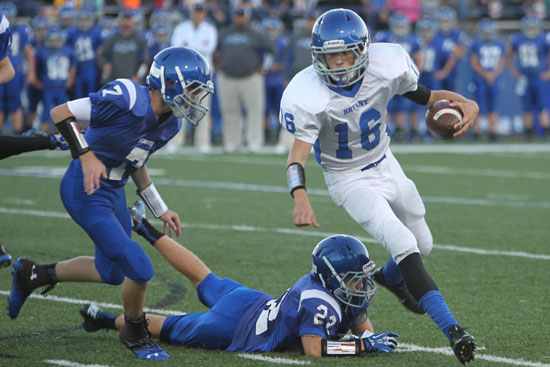 Just moments after getting his team out of a hole deep in their own end with a 41-yard run, Diante Woodson broke loose for a 37-yard touchdown run that gave the Bryant Blue Hornets of Bethel Middle School its first lead of the night with 1:26 left to play. 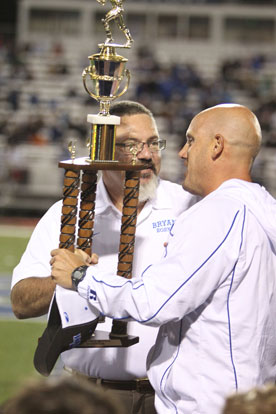 The Bryant White Hornets of Bryant Middle School, after being thwarted at their own 7 just prior to Woodson’s go-ahead touchdown, stacked up quarterback Cameron Vail’s try for a two-point conversion. And, with 1:26 still to play, they began their bid to draw even and, with their own conversion, to regain the lead in the final seconds.

After a snafu on the kickoff left them at their own 4, the White Hornets, behind quarterback Tristan Calhoun, drove to the Bethel 42. Calhoun, who accounted for 233 yards of tandem offense, had hit some big pass plays to Keshaun Davis earlier in the game and he tried to get it to him again. But this time, Davis was double-covered and Blue’s Clayton Guthrie came down with it at the 14 to secure the victory.

The Hornet Bowl trophy thus will reside at Bethel Middle School this year for the first time since 2008.

“We really shot ourselves in the foot during the first quarter,” said Bethel head coach Dale Jones. “But our kids never quit. When I talked to them at halftime, they wanted to win really bad. I’m very proud of the effort. Our defense stepped up big on that last drive. Our offense played well all night.”

“I thought those guys executed their game plan really well,” said Bryant White coach Brad Smothermon. “When we made mistakes, they were costly mistakes. To me, they just played better overall.” 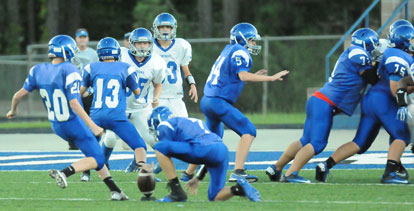 “Coach Smothermon does a great job with his guys,” Jones added. “We knew we would have our hands full. They are good at throwing the ball.”

Of course, next year, the players on the two teams will be teammates.

“I believe as those groups come together, they will be a really good ninth grade team,” Smothermon related.

Woodson finished the game with 130 yards rushing on 14 carries, part of a 229-yard night for Blue. Bryant White accumulated 264 yards of offense with Calhoun rushing for 77 yards and passing for 156.

Almost the entire first quarter of the game was taken up by Bryant White’s opening drive. They reached the 4 and, on a fourth-down, Blue, led by Joe Wyllia, stopped Grayson Prince for no gain.

The White defense, with A.J. Todd making a stop for a loss, went three and out. A short punt and a return by James Polite left White just 18 yards from paydirt. Calhoun kept twice, scoring from the 6.

A try for two was stopped. 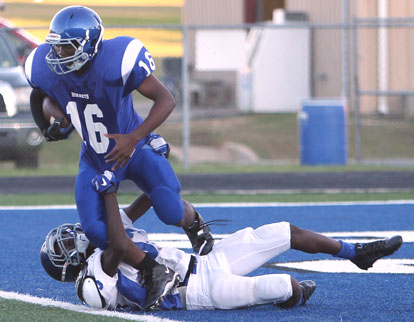 Things got worse for Blue when, after suffering a holding penalty that negated a nice run by Cameron Vail, White forced a fumble which Prince scooped up, returning 35 yards for another touchdown.

Calhoun’s pass on the conversion attempt fell incomplete but Bryant White held a 12-0 lead with 4:55 left in the half.

As it turned out, three touchdowns were scored in that final 4:55. The first one put Bryant Blue on the board. The drive was aided by a personal foul penalty against Bryant White. Vail followed up with a 16-yard keeper to the 10.

Behind Todd and fellow defensive lineman Bryce Thomas, White was forced Blue into a fourth-and-goal at the 3. But Woodson slashed into the end zone to convert. Luke Welch’s extra point attempt was blocked by Johnny Wallace and it was 12-6 with 2:11 left to play. 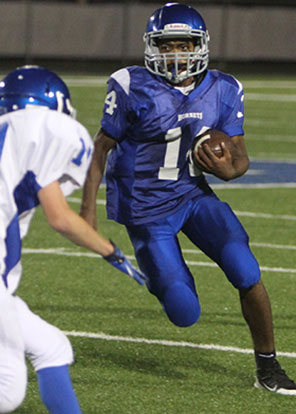 White faced a fourth-and-7 on the subsequent series but Calhoun hooked up with Davis for 29 yards to keep the drive going.

Another completion between the duo wound up getting the points from 18 yards out with :55 left. Calhoun passed to Brooks Ellis for the conversion and it was 20-6.

But Blue countered with a 49-yard touchdown run by Mike Jones with :19 left. Welch kicked the extra point and it was 20-13.

Even then, the White offense made a bid to score. Calhoun completed a pass to Aaron Griffin, then kept for 9 yards to the 40. One more throw to Davis nearly broke for a score but Guthrie hauled him down at the Blue 40 as time ran out.

Blue got the ball first in the second half and promptly marched for a tying TD. Woodson started the drive with a 10-yard run. Jones contributed an 8-yard run then Vail converted a third-down with a 12-yard gallop to the 3. Woodson took it in from there and, with Welch’s extra point, it was 20-20 with 3:32 left in the third quarter.

Again, Bryant White put together an extended drive from its own 21 to the Bryant Blue 9. The key play was another connection between Calhoun and Davis. This time, Davis made a juggling catch between two defenders at the 9. 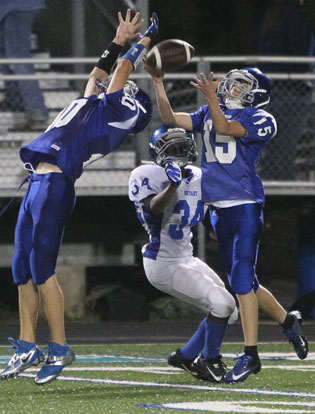 Jones and Parker Littleton stopped Polite for a loss on the first play from there. Calhoun threw to Davis and Vail made a stop at the 7 to save a touchdown. On third-and-goal, Jonathan Smith brought down Polite at the 8.

That brought up a fourth and goal with just under four minutes left in the game. Calhoun rolled to his right and tried to get the ball to Griffin in the back of the end zone amid some traffic. Griffin tried to make a leaping catch but the ball was batted away and Blue had held.

That set up the game-winning drive.

The win improved the Bethel team to 4-2 on the season going into a game at Little Rock Episcopal on Thursday, Oct. 24. Bryant White is also 4-2 now, going into its final game of the season at home against Cabot South on the same night.