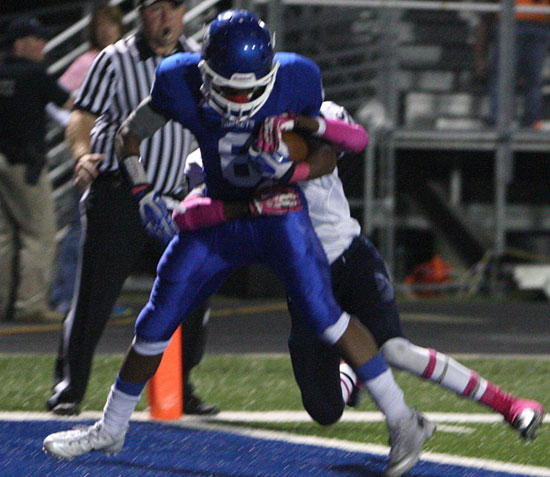 Hornets plan to try to keep getting better at Sheridan

Whether they’re 1-4 like Little Rock J.A. Fair last week or 5-1 like Lake Hamilton, right now the Bryant Hornets are concentrating on becoming the best team they can be during the stretch run of the 2013 season with an eye on being in top form by playoff time.

This week, they happen to be traveling to Sheridan to play a young Yellowjackets team that has lost five games in a row since a 42-40 win to open the season against Little Rock Hall.

“Against Sheridan, the big challenge is to come out and play intense football from the very first snap and build on what we’ve done the last couple of weeks. Coach (Paul) Calley challenged our young men after the Pine Bluff game to take one week at a time and to make sure, when this Friday is over, we’re a lot better team than we were last Friday.

There were five steps toward getting us in the best position we can for the playoffs and this is step two,” he continued. “Hopefully, we’ll continue to move toward that goal of getting ourselves in the playoffs and being a lot better team the 10th week than we were third, fourth or fifth week.”

Asked what he wants to see this week, offensive coordinator Lance Parker added, “I want to keep focused on assignments. We’re going to keep using movement and things to try to get the opponent misaligned.

“They’re growing,” he added referring to his offensive players, “and it’s not that we’re doing anything different but they’re starting to really understand the whole picture of a lot of things. The backs understand lineman blocking, the line understands what the back is trying to do. At quarterback, we’ve gotten more in sync with some of our play-action game. I just want to keep digging and have a deeper understanding because I think that makes them anticipate and play better.”

“They do a lot of disguising coverages so we can’t get too caught up on the pre-snap alignment,” he mentioned. “We’ve got to be able to adjust after the snap when they spin down or spin back or bring a guy here or there. We’ve been working on that in practice.”

Asked about the defense’s play against Fair, Griffith said, “We challenged them to continue the intensity from the beginning of the game that we’d started to build against Pine Bluff (the previous week). We were pleased to see that we did. Our first group went out and played extremely well and by the third series we were working some guys in and out. We were excited to see many of the guys coming in off the bench were executing well and maintained the intensity throughout the ballgame, which we’re proud of in a game like that because sometimes, as the score gets a little one-sided, it’s easy to lose that intensity. But the guys continued to execute throughout the ball game.

“The guys were doing a good job of correcting some of the mistakes we had against Pine Bluff, things we’d worked on in practice,” he said. “We continued to work on some of those things this week in practice and we hope to see a continuation, the elimination of errors.”

Parker related, “The thing that was good for us with Fair is, as much shifting as we do, you really have to be on point to be able to get lined up. They had a hard time getting lined up, which sometimes causes a problem for us because we teach them based on how (the defense is) supposed to line up and it doesn’t always go that way. We had to make some adjustments and we had some teaching points. Overall, we executed. Even when we didn’t get something blocked I felt like the guys carrying the ball cut the ball up field and didn’t try to go sideways and make everything a touchdown. It was overall very good execution on our part.”