What had been a 21-6 lead at halftime for the Bryant Blue Hornets eighth grade team of Bethel Middle School was in serious jeopardy. The Little Rock Dunbar Bobcats had turned one turnover into a touchdown and, after a second one, had moved within a yard and a two-point conversion of taking the lead with time winding down. 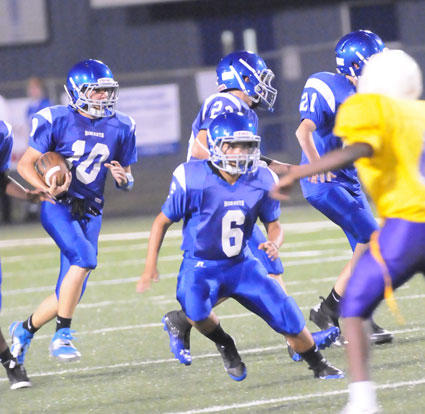 The Bobcats’ Bennie Kemp had broken a run down the right sideline and appeared to be headed for a touchdown when Bryant’s Cameron Vail knocked him out of bounds at the 1. It proved to be a crucial tackle.

Plagued by penalties all evening, the Bobcats moved themselves back to the 10 with a pair of procedure calls. On second down, Kemp tried a keeper that the Hornets, led by Logan Rich, stopped at the 8.

On third-and-goal, Dunbar went to the air. Kemp appeared to have a receiver with a step on the Bryant cornerback at the goal line to the wide side of the field. But the distance of the throw gave Bryant safety Mike Jones enough time to close on the ball and not only knock it down but snatch it out of the air. Already in a sprint, Jones returned the ball all the way to the Bobcats’ 45 with 3:04 left to play, preserving the Hornets’ lead.

The Bryant offense ate up most of the remaining time, eventually punting. Under pressure, Luke Welch got the kick away and when the ball rolled out of bounds at the 13, the Bobcats were left with just :22 to go the length of the field.

The Hornets played prevent defense and closed out the 21-14 win.

“I thought, defensively, for the most part, we made plays when we had to,” he noted. “Michael Jones — that’s a big, big play there at the end that we had to have.”

The Hornets’ Diante Woodson rushed for 92 yards on 20 carries and Jones completed 5 of 6 passes for 85 yards. He was 5 for 5 in the first half. His lone second-half throw was a bubble screen that Kemp picked off and returned for a touchdown.

Coach Jones blamed himself for that play call, noting it was open until Kemp, playing safety, snuck up to the line of scrimmage just before the snap. 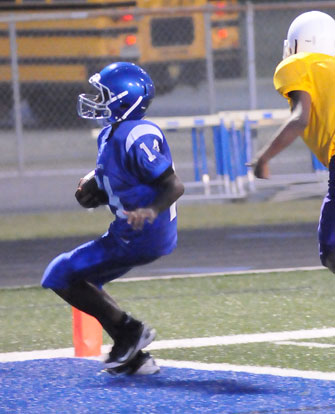 Diante Woodson crosses the goal line on his 6-yard touchdown run in the first quarter. (Photo by Kevin Nagle)

“All their blitzing was giving us problems,” Coach Jones acknowledged. “In the fourth quarter, we picked it up fairly well. In the first quarter, we did a really good job of picking it up. The second and third, we did not and they gave us some negative plays and frustrated us a little bit.”

The Hornets were still able to put up 14 points in the second quarter. They actually scored on all three of their first-half possessions. The opening drive came after they recovered an onside kick at their own 49. Woodson got things going with an 18-yard dash. He wound up carrying the ball on all seven plays eventually scoring from the 6. Welch added the extra point to make it 7-0 with 3:21 left in the opening period.

Dunbar answered after its first two plays were stuffed by Bryant’s Ryan Harris and Mike Jones. Kejuan Richardson’s pass to Troy Spivey broke for 45 yards to the Bryant 15.

On the next snap, however, Kemp was hauled down by Vail and Cole Campbell for a 7-yard loss. After a timeout, however, big fullback Deandre Scott busted through the middle and crashed 22 yards for a touchdown.

A try for two was stopped by Jace Houston for Bryant and it was 7-6 as the second quarter began.

“We didn’t tackle that great but, my goodness, that 180, 190-pound running back,” Coach Jones said, referring to Scott. “It’s hard to bring that guy down. I didn’t like it that we didn’t swarm to the football as well as I’d like to see. But you’re going to play a little tired when you play two games in four days.”

After a good kickoff return by Mike Jones reached near midfield, the Hornets started off on their second scoring drive, mixing in some passing with Woodson’s running. In fact, Jones hit Woodson for a 15-yard pickup to convert and early third down. From the 29, Jones was dropped for a 5-yard loss but, on third down, he threw to Vail for 6 yards to set up a fourth-down toss to Woodson that picked up the first.

A play later, Jones and Vail hooked up for an 18-yard pass to the 1 where a quarterback sneak produced the points with 1:41 left in the half. 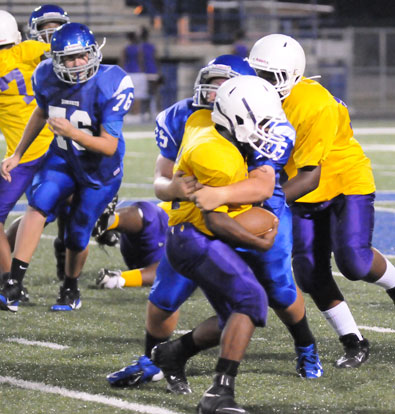 Ryan Harris (75) wraps up a Dunbar ball carrier as Joe Wyllia (76) moves in to help out. (Photo by Kevin Nagle)

Moments later, the offense was back on the field as Dunbar was unable to handle a squib kick by Welch. Parker Littleton recovered for Bryant Blue at midfield.

Turning to his bag of tricks, Coach Jones called for a reverse pass, with his quarterback starting the play as a wide receiver. Because of the aggressiveness of the Dunbar defense, there wasn’t much room to maneuver but, after taking the handoff, Mike Jones ducked under one defender and fired downfield as he was clobbered.

Littleton was alone behind the defense and, though he had to slow down to haul in the pass, dashed to the 13 before being brought down. Woodson scored on his third straight carry from there, stepping into the end zone on a third-down play from the 5.

Despite a low snap, Vail got the ball on the tee and Welch kicked it through for the extra point to make it 21-6 with :30 left in the half.

Bethel got the ball back to start the second half and appeared to be on its way to yet another score, driving to midfield with the help of a pass interference penalty that converted a third-down play. But, on a second-and-3 at the Bobcats’ 49, Kemp turned the tide with a pick-six. He also ran in the two-point conversion to make it 21-14.

Again the Hornets were moving the ball on their subsequent possession. Woodson dashed for 18 yards and a face mask penalty pushed the ball to the Bobcats’ 29. But the aggressive Dunbar defense forced two lost-yardage plays after that including a fumble at the 31 that Keymen Frazier recovered with 2:28 left in the third.

Scott rumbled for 10 yards to get the drive started. A play later, however, a holding penalty pushed the Bobcats back. Facing a second-and-21 at their own 27, Kemp tried to roll out to the right and throw but the Hornets appeared to have him buried for a loss. Somehow, he escaped and scrambled 27 yards to keep the drive alive.

They drove to the 27 before Kemp broke the run to the 1, setting up the dramatic finish.

Now 2-1 on the season, Bethel will be off until they travel to play Conway Blue on Thursday, Oct. 3.

“It’ll give us a good chance to heal up and get back to some fundamentals,” Coach Jones said of the break.