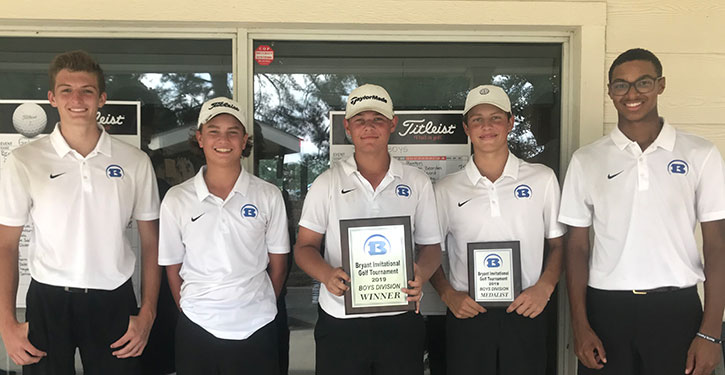 Logan McDonald and Daniel Taylor turned in the best rounds, each carding a 70, before McDonald won a playoff to earn medalist honors at the Bryant Invitational at Longhills Golf Club on Monday.

Cabot won the girls competition at 250. North Little Rock’s Mackenzie Lee was medalist by firing around of 66. Bryant’s Caitlin LaCerra was runner-up with a round of 80.

El Dorado’s girls were second at 275. Bryant finished fourth with a team total of 284.

Along with McDonald and Taylor, the Hornets’ Andrew Gaspard finished at 77 with Cameron McDonald at 78 and Landon Wallace at 79.

Carson Stephens of Cabot was individual runner-up with a round of 71.

For the Lady Hornets, Brooklyn Waller carded an 85. Taylor Moore finished at 119, Leighton Crawley 121 and Haylie Horn at 134.

On Saturday, Bryant competed in the Wampus Cat Invitational. The boys finished at 325, led by Gaspard’s 71, which was second overall behind Caleb Miller of Cabot, who turned in a 68.

LaCerra and Waller each finished at 92 for Bryant, which finished with a team total of 310. Cabot won the team title at 277 with Mountain Home second at 288.

“They all said they hit the ball good, just got some unlucky lies,” said Bryant coach Casey Mattox. “And the greens were tough.”

Bryant is set to play a dual match with Benton at Hurricane on Tuesday, Sept. 3, then travel to Fayetteville for the Bulldog Invitational on Sept. 9.