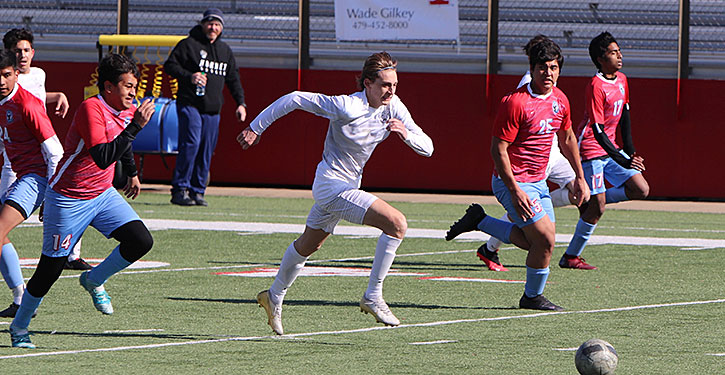 FORT SMITH — At the annual Fort Smith Northside tournament this weekend, the Bryant Hornets went 1-1-1 including a 4-0 win over the Fort Smith Southside Mavericks.

The lost on Friday night to Springdale, 1-0. Saturday evening, the Hornets and Rogers Heritage War Eagles battled to a 1-1 tie.

“It was a good weekend,” said Hornets coach Richard Friday.

In the victory, Brandon Delgadillo had a hat trick and assisted on the fourth goal by Landon Nelson.

“We moved the ball around better this morning,” Friday said.

Of Friday’s loss, he said, “We competed hard but defended a lot. We were a bit nervous and kept turning the ball over. After we gave up the goal, we started playing a bit better.”

Grant Jacuzzi headed in a goal off a cross from Carlos Gaytan in the first half of the match with Heritage and the score held for much of the game.

“I didn’t sub because I wanted them to work on playing while tired,” Friday mentioned. “Heritage capitalized late in the second half to tie it.”

The Hornets return to action on Tuesday when they travel to Benton to take on the rival Panthers.