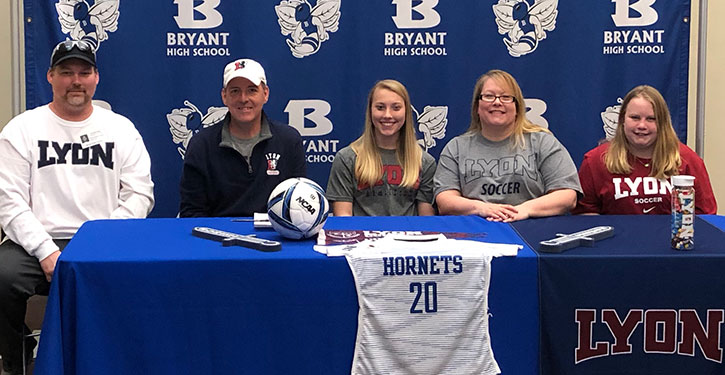 Bryant Lady Hornets assistant soccer coach Jessica Brown was kind of kidding — only kind of — when she started speaking about senior Lauren Heath on Tuesday.

And she added, referring to the Lady Hornets’ games at the Fort Smith Northside tournament, saying, “And for the first time, this past weekend, there’s only been one person to lay out Lauren. I was worried then too, but she got right back up. So that’s good.”

Assertive and physical when needed, Heath is one of the leaders of the 2020 Lady Hornets as they eye back-to-back State championships.

And, on Tuesday, she officially signed to continue her soccer career and her academics on scholarship at Lyon College in Batesville as her parents, Angel and Chris Heath, Lyon coach Marc Neddo, her teammates and classmates cheered her on.

“I first went to a UCA ID camp for a day,” Lauren Heath related. “(Coach Neddo) emailed me about two weeks later and said he was interested in me and invited me for a visit. I got a visit with the school the week he emailed me. He scheduled a little get together with the team and I got to see the school. I practiced with the team and we just clicked real well. I knew that was my decision once I clicked with the team like that.”

It wasn’t her only interest at first.

“I was looking at UCA,” she said. “And I was going to go to Tech if I didn’t get any scholarships for soccer. But I was more focused on UCA. I looked at Hendrix and A-State too. But when I went to the school at Lyon, it just clicked way better than the other schools.

“They have a good Biology program and mathematics,” she added. “They’re just real good with their academics. And it’s a really small school and I kind of like that as well.”

Heath plans to teach and coach.

“I don’t know if I want to be a Biology teacher or a mathematics teacher just yet, but I want to do one of those,” she said.

“Lauren is one of the people that I can say gives 110 percent,” said Brown, who was standing in for Lady Hornets’ head coach Nicole Inman who was in St. Louis undergoing treatment for the brain tumor that she’s been coping with for over a year.

“She works a full-time job,” Brown said of Heath. “She told me last week, she worked like 50 hours, and she still makes a 3.8 GPA, which is really impressive because a lot of us did not have jobs in high school. So, it’s awesome to see how great she’s doing, not only is soccer but in life, the choices she’s making.”

Heath began playing soccer early in her life and it quickly became a passion of hers.

“Coach Inman was one of my first coaches when I was real young,” she related. “When I hit about 10, I played upper level, like three years above my level.

“My dad was my coach sometimes and I played keeper,” she mentioned. “I don’t play keeper anymore. But I played it and I got real good at that. Once he stopped being my coach, I had another coach and that’s when I started playing up more. So, I developed more as a player because I was allowed to play with the higher-level kids which allowed me to get better as an athlete.”

“I know she’s going to do great things at Lyon,” Brown said. “She’s going to give it her all and she’s probably going to hurt some people on the way there.

“But I know she’ll have a good academic career and I’m sure she’ll have a full-time job in college as well. She’ll be working weekends when she’s not playing. I’m proud of her and I can’t wait to see how far she goes.”

Heath plays outside wing and forward this season. Asked about her strengths as a player, she allowed, “I’m good with keeping the ball real tight. My speed is something that a lot of people can’t handle as well. I see the field different than most people, which is really unexpected because it’s hard to do that.”

Added Brown, “She’s talented. She’s tough. She’s bold. She’s not afraid to say how she feels, which I kind of like. I don’t have to worry about what’s she’s thinking because Lauren will say it, good or bad, which I don’t mind at all.”

“Playing for Bryant has been interesting because, my first year, we had a coach that didn’t know what he was doing too well,” Heath related. “But we still had the talent to go. After that, we got Coach Inman and she knows exactly what she’s doing. She’s a very good coach. She’s improved me so much.

“Us winning last year was amazing,” she added. “I was glad I got the opportunity to actually get a State title. And I’m ready to win one this year, I hope. I think we’ve got this if we just continue to grow and develop as a team.”