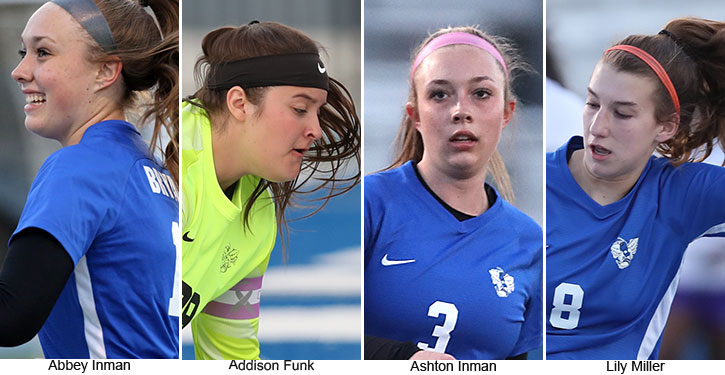 The Lady Hornets finished 2021 with a 15-2-2 overall record. They were 12-1-1 in league play. They were upset by Bentonville West in the quarterfinals of the 6A State Tournament.

First-year head coach Olivia Allard commented about each of the honorees.

Regarding Funk, her goalkeeper, she said, “Addi had a phenomenal season. She recorded 83 saves on the season, 13 shutouts, and 15 wins. She came up huge for us in so many games and was a difference maker. She was the team’s biggest cheerleader and was a great senior captain for this team.”

Ashton Inman: “Ashton had a great year. She was a great senior captain for this team. She recorded 21 goals and 5 assists for the season. Ashton had 7 game winner goals this year. Her soccer IQ played a huge role in our success and for helping the younger girls see how certain skills should be done.”

Abbey Inman: “Abbey had two goals and 10 assists for the season. I raved about our defense time and time again this season and she played a big role in that. She directed our defense well and helped with our offensive production.”

Miller: “As a freshman Lily recorded 1300 minutes of game play, scored 5 goals, and had 11 assists. She stepped into a role surrounded by seniors, and she did a tremendous job getting the job done. This season she grew a lot as a player and grew her soccer IQ. It will be wonderful to have her experience back next season.”

Brewer: “As a sophomore Hannah recorded 1370 minutes of game play, had 2 goals and 1 assist. This season Hannah was put into several different positions on the field and time and time again she stepped up to the challenge. This year she played every position, except the one she was the most comfortable with, and she did it for the good of the team. She is a team player, a fierce competitor, and a lot of fun to watch!”

Fluger: “As a freshmen Kaylee logged 1080 minutes, 5 goals, and 7 assists. Kaylee was another one that was asked to go just about everywhere on the field this year. She knew size was not something on her side, but her speed is a gift. This season she grew a lot as a player, and I am so excited to have her skill and experience back next season.”

Atilano: “This season Jackie recorded 4 goals and 5 assists. Jackie plays because she loves the game. There were times you couldn’t tell if she was playing offense or defense because she covered everywhere she needed to be. She gave it her all and was so much fun to watch!”

2021 Lady Hornets basketball camp to be held June 1-3
Memorial Day 2021: Our deepest gratitude for those who gave all