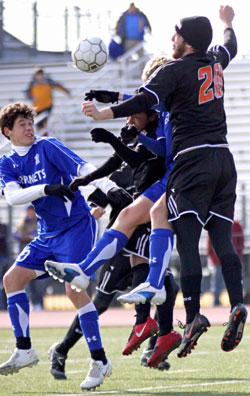 PARAGOULD — For just the second time in the history of the program, the Bryant Hornets soccer team is off to a 5-0 start on the season after capturing the championship of the Paragould Invitational Tournament on Saturday, Feb. 21.

Coming into the event off wins over Episcopal Collegiate and Jacksonville, the Hornets didn’t allow a single goal in regulation in the entire tournament. They dismissed Marion, 7-0, in its opener then edged Batesville, 2-1, in a shootout to advance to the finals where they stopped Valley View, 2-0, to claim the title.

The team will try to extend that momentum into their 7A-Central Conference opener against Little Rock Catholic on Thursday, Feb. 26. The Rockets were State semifinalists last year after winning the Class 7A championship in 2007.

“It was good for us to get five games in in a week,” commented head coach Jason Hay. “Now we get to head into the 7A-Central Conference buzz saw, playing Catholic, Conway, Russellville and Van Buren. We play in the best conference in the state.”

Those three teams have accounted for the last three Class 7A State titles, Conway in 2008, Catholic in ’07 and Van Buren in ’06.[more]

Of the tournament, he added, “It was a good experience for our kids to get to play in a tournament and spend the night, kind of have a little bonding time,” commented Hornets coach Jason Hay. “And they reacted well. They were excited about winning it and it’s great for the team’s confidence.”

In the championship game, freshman Peter Alverio, on a penalty kick, and senior Marvin Lopez accounted for the goals and the Hornets won despite the absence of Jonathan Lowery who injured an ankle in the first half against Batesville.

“Our defensive line up did a good job the whole tournament,” Hay emphasized. “(Keeper) Devin (Norris) had a good game against Valley View and Batesville. The back four (Ezel, Seth Howerton, Tyler Salminen and Aaron Prewitt) did a good job of getting the ball out of our end. We didn’t have too many shots on goal taken on us.

“All the kids worked hard, showed they’re in good shape and hustled pretty good,” he concluded. “It was a good effort.

In the match with Batesville, Bryant controlled the ball for most of the game in Batesville’s end. The Hornets were awarded a penalty kick in the first half but Tim Ezel’s kick saild just over the crossbar.

The second half went pretty much as the first. Bryant dominated possession on Batesville’s end but couldn’t convert on several good opportunities. The best chance came three minutes into the half when Lopez’ attempt went just wide right of the goal.

In overtime, Norris knocked down two of the Batesville kicks and the Hornets got a second on to go in after the two teams matched goals.

“We came out a little sluggish on the first game on Saturday,” Hay stated. “We had a long layover; after playing at 7:45 then basically had until 1:45. We played in a cold rain. 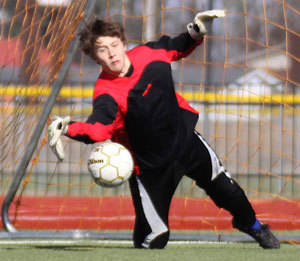 “We had to win on some penalty kicks but we played real good defense,” he added. “We had a bunch of opportunities. That’s kind of been our problem, we’ve had a lot of shots on goal and we’re just not converting them. We’ll need to improve our percentage before we start playing in Class 7A.”

Early Saturday morning amid windy, cold conditions and predictions of snow in the area, the Hornets raced to a 5-0 lead in the first half.

The first goal came seven minutes in when Lowery took a feed from Alex Rowlan and booted the ball into the upper left corner of the goal.

Ten minutes in, Rowlan did the honors with an assist from Ezel. And, just a minute later, Lowery found the range again off a nice pass from Jared Umland.

Lopez made it 4-0 with a goal 22 minutes in from about 10 yards out, placing the ball just beyond the reach of the Marion goal keeper. Reed Evans had the assist.

The fifth goal came when Lopez made a steal with about two minutes left, broke down the left sideline and centered in on the keeper who couldn’t get to his kick.

In the second half, many of the Bryant reserves got into the action. Freshman Caleb Lambert picked up a loose ball in front of the goal and laced it past the keeper for his first varsity goal.

Late in the game, freshman Brenden Guffey added his first varsity goal to complete the scoring on a shot from 35 yards out that looped over the keeper’s head.