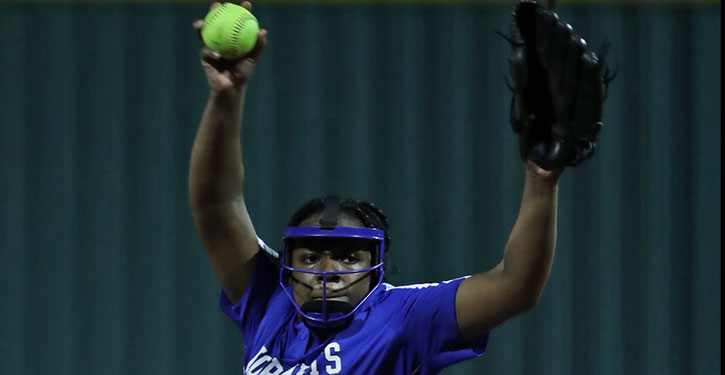 Bryant comes from behind to earn first league victory

FORT SMITH — Leah Hicks retired 10 in a row after relieving in the bottom of the fourth, allowing the Bryant Lady Hornets a chance to overcome a 6-2 deficit as they forged a 9-6 win in their 6A-Central Conference opener against the Fort Smith Northside Lady Bears on Tuesday.

Hicks and her batterymate Buddha Dillon each had three hits. Macy Hoskins, Christine Mefford and Kallee Nichols each had two.

Bryant trimmed a run off the 6-2 lead in the top of the fifth but then tied the game with a three-run sixth and, with three more in the top of the seventh, secured the victory with Hicks mowing down the Lady Bears in the bottom of the inning.

The game-winning uprising started with Marissa Bracey reaching on an error. Dillon followed with a drive to right field for an RBI triple that snapped the 6-6 tie. Hicks delivered a sacrifice fly to make it 8-6.

Mefford smacked a double to center but was thrown out trying to stretch it to a triple. But Nichols reached on another Northside miscue, stole second and scored the final run on a single by Hoskins.

Northside had scored initially, taking a 2-0 lead in the bottom of the first. C Massey singled to center then T Sumbler beat out a bunt hit. D Teague sacrificed them to second and third for C Ray, who singled in both runs.

Bryant threatened to answer in the top of the second when Bella Herring’s bunt was misplayed. She stole second then, with one out, tried to score on Dillon’s single to center. But she was thrown out at the plate.

Mefford, Bryant’s starting pitcher fanned the side around a two-out walk in the bottom of the second.

The Lady Hornets got on the board in the third. Nichols beat out a bunt hit and stole second. Hoskins got a sacrifice bunt down, but it too was misplayed. With Nichols at third, Hoskins swiped second. Alissa Suarez got a squeeze bunt down to get Nichols home.

After Mefford pitched around a lead-off walk, the Lady Hornets tied it in the top of the fourth. Abby Gentry’s infield hit was followed by a walk to Dillon. Though Gentry was thrown out trying to steal third, Hicks singled to right. Mefford bunted the runners over then Nichols’ bloop single drove in Dillon. Hicks tried to follow but was thrown out at the plate to end the inning.

With two on and two out in the bottom of the inning, A Hale singled to right. When the ball was misplayed, a run scored.

A walk loaded the bases for Sumbler who doubled to clear them, making it 6-2.

Hicks relieved at that point and got D Teague to fly to right to end the outburst.

The Lady Hornets started whittling on the lead in the top of the fifth when Caitlin LaCerra beat out a bunt hit with one down. Suarez ripped a triple to drive her home. But Suarez was stranded at third as the game went to the bottom of the inning.

After Hicks and the Bryant defense retired the side in order, the Lady Hornets rallied to tie the game. Doubles by Dillon and Hicks produced the first run. Mefford’s bunt hit allowed courtesy runner P Arana to sneak home, making it 6-5.

With one out, Hoskins lined a single to center. Runners moved up to second and third when LaCerra grounded out to the first baseman. That brought up Suarez who’s grounder to short was booted, allowing Mefford to score the tying run.

The win improved the Lady Hornets to 3-2 overall. They’re set to play a league game at North Little Rock on Wednesday.